Home / India News / What the Mahatma ate and why

What the Mahatma ate and why

An austere eater, Gandhi constantly experimented with his diet. These experiments were based on his beliefs and part of a deep, spiritual quest

“I have been known as a crank, faddist, madman,” wrote Mahatma Gandhi in his weekly journal, Young India, in 1929. He was referring to his dietary experiments, which lasted all his life, and were often so austere they bordered on the ascetic. It has now become something of a fad itself to say that many of Gandhi’s diet concerns were uncannily contemporary: his commitment to vegetarianism; the limiting of salt; not eating after sundown; wanting to be vegan (though, despite his best efforts, he couldn’t give up milk, eventually settling for goat’s milk), cutting down on how much he ate and so on.

But there was a crucial difference in Gandhi’s long-running attention to his diet and our modern obsession with healthy eating. For the Mahatma, it was not only for the purpose of being fit, though that was certainly part of the plan. For him, dietary experiments were part of his philosophy of self-denial and self-restraint, and of an overall, lifelong moral, spiritual and ethical quest which dominated every aspect of his life.

But he never forced his dietary beliefs on anyone and was always delighted to hear different views on the subject.

A vegetarian by choice

This was the foundation on which everything else was built. Gandhi came from a vegetarian Gujarati family and never ate meat in his life, except for a brief period as a schoolboy, when he did so at the urging of his elder brother’s friend who convinced him that the English were able to rule over Indians because they were meat-eaters. Gandhi records in his autobiography that he must have had half a dozen secret “meat-fests” over a period of one year.

But the fact that he was lying to his parents gnawed at his heart. “In their [his parents’] lifetime, therefore, meat-eating must be out of the question. When they are no more and I have found my freedom, I will eat meat openly, but until that moment arrives I will abstain.” But he never ate meat again. Before leaving for England to study law in 1888, he vowed to his mother that he would not touch meat or liquor. He kept his word, though vegetarian food was hard to come by and he was always hungry.

He eventually found a vegetarian restaurant on Farringdon Street (“the sight of it filled me with the same joy that a child feels on getting a thing after its own heart”), which also stocked a book that influenced him deeply: English writer Henry Stephens Salt’s Plea for Vegetarianism. Gandhi ate his first hearty meal since his arrival in England there, and followed it up by reading Salt’s book from cover to cover. After that, says Gandhi, he became a vegetarian by choice (as opposed to being vegetarian because of family tradition).

He joined the Vegetarian Society and made English friends who were part of the Society. For a while he had a London roommate, Josaiah Oldfield, a barrister, who was an active member of the Society. Later, when he was in South Africa, he met Henry Polak, a British-born Jew, at the Alexandra Tea Room, the only vegetarian restaurant in Johannesburg. Polak ended up becoming one of his closest friends. But he also lost friends – an English family in South Africa asked him to stop visiting them, because their son was beginning to refuse eating meat.

Gandhi firmly believed that a meat diet was not good for health, because meat brought with it the “defects of the animals from which it is derived.” But more importantly, his vegetarianism had deep spiritual and philosophical underpinnings. It was part of his commitment to ahimsa, the cornerstone of his politics. Eating meat meant doing violence to animals, who, he believed, had spirits and souls. Vegetarianism was also a crucial part of brahmacharya, which meant exercising self-restraint, in order to control the senses.

No salt, no pulses

Gandhi favoured a low-salt diet. It was a principle he followed for years. And though he liked them, he had read that the “weak-bodied” should avoid pulses. In his autobiography, he recounts a time in South Africa when his wife Kasturba wasn’t well. Gandhi entreated her to give up salt and pulses. She threw him a challenge: even he would not be able to give them up. She should have known better. Gandhi stayed away from both long after they returned to India. “Medically there may be two opinions as to the value of this diet, but morally I have no doubt that all self-denial is good for the soul. The diet of a man of self-restraint must be different from that of a man of pleasure,” he wrote.

Yes to fruits and nuts

Gandhi loved fruits. For years he was a fruitarian and subsisted on fruit and nuts. But he noticed that this diet often caused friends who he stayed with some inconvenience. When he was the guest of a friend in Calcutta, he says that all the fruits and nuts available in Calcutta were ordered for him and the women of the house stayed up the whole night skinning various nuts. So, on a visit to Hardwar for the Kumbh mela, he took a vow never, while he was in India, to take more than five articles of food in 24 hours and to finish his last meal before sunset. He mostly kept the strict five-foods vow, once again underlining his ascetic approach to food.

Gandhi felt that milk makes the brahmacharya vow (he had taken the pledge to remain celibate in 1906) difficult to observe because milk was partly a stimulant. (Unsurprisingly, it was his early mentor, the Jain mystic Raychand, who told Gandhi that “milk stimulated animal passion.”)

But this was not the only reason. As always with Gandhi, there was a moral reason – “We are certainly not entitled to any other milk except the mother’s milk in our infancy.” There was also a health reason – “Both milk and meat bring with them the defects of the animal from which they are derived.” And there was the humane, ethical reason – Gandhi came across some literature from Calcutta, which described the tortures cows and buffaloes were subjected to by their keepers.

In 1912, when he was living in Tolstoy Farm in South Africa, he pledged to abjure milk, along with his friend and close associate Hermann Kallenbach. Both men felt milk was not necessary for the human body, indeed it often had harmful effects. But Gandhi was forced to review his no-milk policy when he fell ill with severe dysentery in the middle of a recruiting campaign in Kheda for World War I and doctors insisted he needed milk to shore up his strength. Gandhi, who writes that he was literally at death’s door, gave in and started to drink goat’s milk.

Why not raw food?

In May 1929, Gandhi attempted a serious experiment with eating only raw, uncooked food. A month into the experiment, he wrote in his weekly journal, Young India, “I have lived for years on uncooked fruit and nuts, but never before beyond a fortnight on uncooked cereals and pulses.” Why did he conduct this experiment? He had an answer: “If it succeeds it enables serious men and women to make revolutionary changes in their mode of living. It frees women from drudgery… the ethical value of uncooked food is incomparable.”

His daily raw diet (with flexible permutations and combinations) consisted of:

But by mid-August he had to abandon his diet (he had lost weight on it) because of an attack of dysentery. “It appears I was not digesting the raw foods I was taking,” he wrote in Young India. He did add though that “as a searcher for Truth I deem it necessary to find the perfect food for a man to keep body, mind and soul in a sound condition.”

The celibate - Gandhi’s diet was influenced by his brahmacharya vow

Gandhi’s experiments with his diet were closely connected to the brahmacharya vow he took in 1906. In this, he says he was predominantly influenced by Raychand, a jeweller and an austere Jain mystic and teacher, who Gandhi met in Bombay after he returned from England in 1891 and who became his spiritual mentor till his death in 1901. Raychand himself had taken a brahmacharya vow when he was still married.

There were several reasons why Gandhi decided to turn celibate – he did not want to have more children (“It became my conviction that procreation and the consequent care of children were inconsistent with public service… if I wanted to devote myself to the service of the community…I must relinquish the desire for children and wealth and live the life of a vanaprastha – of one retired from household cares.”), he wanted to exercise self-control and conquer lust. And for Gandhi, the first essential in observance of the vow was control of the palate, since brahmacharya meant “control of the senses in thought, word and deed.” A brahmachari’s food should be limited, simple, spiceless and, if possible, uncooked. After six years of experiments, Gandhi concluded that the brahmachari’s ideal food is fresh fruits and nuts.

He further wrote, “As an external aid to brahmacharya, fasting is as necessary as selection and restriction in diet. So overpowering are the senses that they can be kept under control only when they are completely hedged in on all sides…It is common knowledge that they are powerless without food, and so fasting undertaken with a view to control the senses is, I have no doubt, very helpful...” He recognised that a fasting man may continue to be swayed by passion. But he realised that “extinction of sexual passion is as a rule impossible without fasting...” Gandhi’s biographers have written about how little he ate. For Gandhi, his frugal diet not only helped fulfil his brahmacharya vow, it also gave him the energy he needed to do his public work. 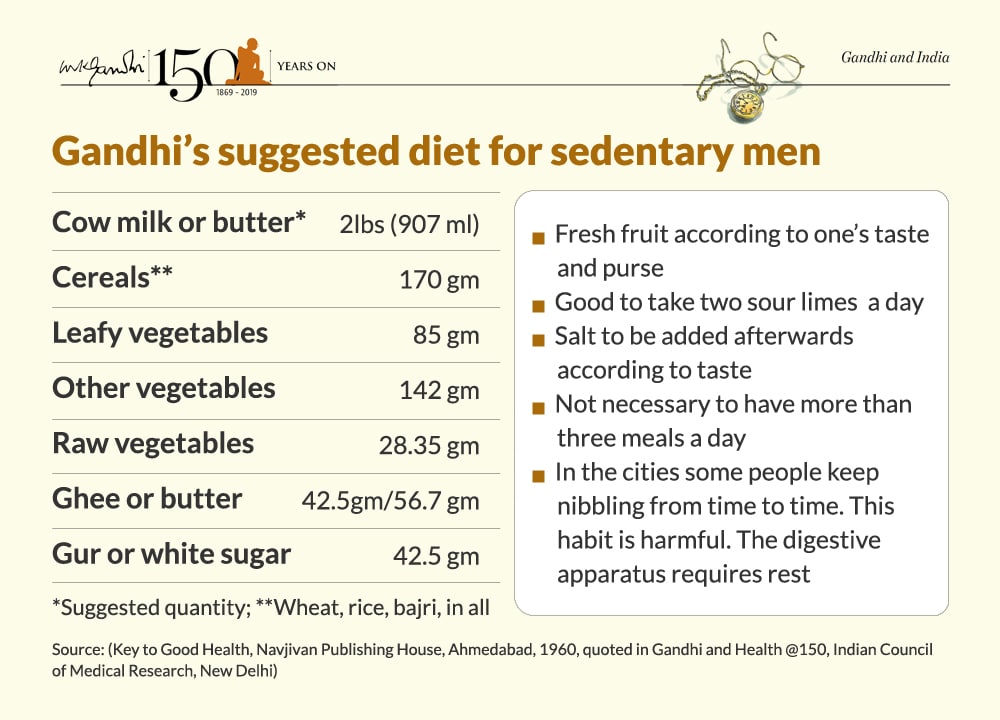