In the first of a three-part series, the HT panel reviews desilting of four drains in the city’s central suburbs. In all, the panel examined the maintenance of nine nullahs and five roads on June 2.

History repeats itself first as tragedy second as farce, so the saying goes. In the context of the Brihanmumbai Municipal Corporation’s (BMC) monsoon preparedness, these words have been ringing true since the 2005 deluge.

Like every year, the BMC is patting itself on the back for completing desilting of stormwater drains (nullahs). It is also not unusual for the BMC to see its claim washed away with the first monsoon, or pre-monsoon, showers.

But an expert opinion on BMC’s claim about desilting of nullahs can clear the air.

To achieve this, HT has roped in four experts — two former BMC officers, an activist and a civil engineering professor — for its annual monsoon audit; and their findings make for grim reading once again. However, they observed that the situation is a tad better than previous year.

The HT panel examined maintenance of nine nullahs and five roads on June 2. In the first of a three-part series, the panel reviews desilting of four drains in the central suburbs — at Dharavi, Rafiq Nagar in Chembur, Chunnabhatti and Somaiyya Hospital in Sion.

The average score for the four audited drains was a mediocre 6.3 out of 10 marks.

The BMC has spent about ₹70 crore on desilting the 287-km of Mumbai’s nullahs over two months. The panel observed that the civic body’s performance of desilting and widening of the four drains has improved this year. But, the BMC has failed to keep the nullahs clean by not removing encroachments near them. This has led to sewage being released into the nullahs. The civic body has also failed to spread awareness over dumping of trash in them. If the four audited nullahs clog this monsoon, parts of Dadar and Matunga railway stations, King’s Circle at Wadala, Sion, Kurla, Dharavi, Chembur and Pratiksha Nagar are likely to be flooded.

This year, the BMC started cleaning nullahs on April 1 and wound up on May 31. Facing heat since the deluge of 2005 in which more than 500 died and more recently the death of a renowned gastroenterologist during last year’s downpour, the BMC has gone into overdrive to make amends this year. But is it enough?

The civic body said as of May 31 it had completed 99% of desilting. The Mithi river has been completely cleaned, claimed the BMC. Vijay Singhal, additional municipal commissioner of the stormwater drains department, said, “I examined nullahs on Tuesday. The work is almost complete. But trash thrown by residents again clogs up drains.”

Nullahs are supposed carry stormwater to the rivers or sea. But they also double up as sewage carriers. According to the Mumbai Municipal Corporation (MMC) Act, no structures can come up within six metres of nullahs. But the drains at Rafiq Nagar, Somaiyya Hospital, and Dharavi have huts abutting them.

Former BMC official Girish Patil, a member of the HT panel, said, “At many places, haphazardly constructed hutments clog the banks of the nullahs. Each house discharges untreated sewage into the nullah. The stench is unbearable.”

Another member of the audit team, activist Vidya Vaidya said, “Standing on the banks of these nullahs for 10 minutes, we spotted at least three people walking over to its retaining wall and dumping plastic bottles, household waste and vegetable waste into the drain.”

The Dharavi nullah is dotted with hutments and makeshift shops, which use the nullahs as waste basket. The situation at Somaiyya nullah was no different. Nandkumar Salvi, former chief engineer of the stormwater drains department, said, “While desilting is over, the nullahs at many places do not have proper retaining walls. This provides easier access to litterbugs.”

In addition, a water pipeline hinders flow of Chunnabhatti and Somaiyya drains at some places.

Experts advised a change in BMC’s approach to overcome the trouble. “Nullah cleaning has to take place throughout the year, at regular intervals,” said Salvi. Vaidya suggested that the BMC spread awareness against littering.

THE REPORT CARD OF EASTERN SUBURBS
After examining four drains, the HT panel has pointed out that despite BMC’s efforts parts of eastern suburbs may still face waterlogging 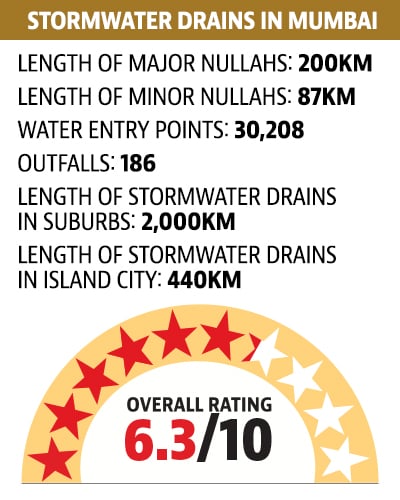 DHARAVI NULLAH (DADAR)
WHY IT MATTERS: A closed nullah from the railway boundary in Dharavi to Shahu Nagar, it opens up between Dadar and Mahim. According to experts, a clogged-up drain will lead to waterlogging in parts of Dadar and Matunga

WHAT HT PANEL FOUND: The central part of the nullah was not cleaned. Floating material — household waste, water bottles, etc — was not cleared. Sewage water from nearby hutments flowed into the nullah

SOLUTIONS: Round-the-year clean-up, removal of en-croachments and higher retaining walls are some of the remedial measures

EXPERTSPEAK: NandaKumar Salvi said, "Desilting work on the nullah is almost complete. But the problem is the floating garbage, which can choke the nullah. A major part of the nullah is closed, with hutments constructed on top of it. This makes it difficult to clean the closed portion." RAFIQ NAGAR NULLAH (GOVANDI)
WHY IT MATTERS: The drain runs from Govandi to Mahul creek. If it is not cleaned, Chembur and Govandi will get flooded

WHAT HT PANEL FOUND: Desilting has been completed as the bed of the nullah is visible. However, cleaning has been carried out properly, as floating material can be seen

SOLUTIONS: It is affected by tidal water, hence some amount of silt and floating material is likely every time water accumulates in the nullah. Mending the broken parts of the retaining wall will enable cleaning of the nullahs

EXPERTSPEAK: GD Patil said, "Water will flow out if the nullah swells up. We need to create public awareness about throwing solid waste in the water channel." CHUNNABHATTI NULLAH (CHUNNABHATTI)
WHY IT MATTERS: The Chunnabhatti nullah winds from SG Barve road to Kurla station to Mahul creek. If not scrubbed properly, parts of Sion, King’s Circle and Kurla will face trouble

WHAT HT PANEL FOUND: Desilting work was ongoing and the drain has been widened to increase its water carrying capacity Widening work has not been com-pleted at Somaiyya nullah, where it is inter-rupted by a water pipeline

SOLUTIONS: Desilting work should complete in May and must not spill over to June. The drain should uniformly be widened

EXPERTSPEAK: Vidya Vaidya said, "The onset of monsoon season is two or three days away, and desilting work is still going on. The nullah is cleaned, but work is ongoing. It needs to be completed before March. Also cleared silt piled on to the side of the nullah needs to be cleaned before monsoon." SOMAIYYA NULLAH (SION)
WHY IT MATTERS: The drain flows through Somaiyya hospital at Sion, joins Chunnabhatti nullah, and empties into Mahul creek. Shoddy desilting puts Kurla, Chunnabhatti and Pratiksha Nagar at risk of getting flooded.

WHAT HT PANEL FOUND: The nullah has been encroached upon by hutments and shops. The meeting point at Chunnabhatti nullah — a water pipeline interrupts its flow — is too narrow and un-clean. No retaining walls inside Somaiyya hospital

SOLUTIONS: The panel of four experts has recommended the removal of encroachments. It has also suggested that the water pipeline should be diverted to ensure that it does not hinder the flow of the stormwater drain

EXPERTSPEAK: Nandakumar Salvi said, "The portion of the nullah from Pratiksha Nagar to Chunnabhatti has not been cleaned properly. Parts of the drain fall under a private owner, who does not clean it as per BMC’s protocol."
tags
top news