Keeping with tradition, the first Monday of May has brought the world’s biggest costume party back in New York’s Metropolitan Museum of Art. The Met Gala hosted the most stylish celebrities again this year, including Bollywood stars Priyanka Chopra and Deepika Padukone.

Priyanka arrived to the gala with her American singer husband Nick Jonas. She was dressed in a grey-yellow-pink Dior gown, and her entire look appeared to be inspired by Lewis Carroll’s Alice In Wonderland. She wore a spiky silver gown with her hair in tight and frothy curls, just like the Red Queen. Her eyebrows were painted grey and her eyes were lined with a white eyeliner. Nick, meanwhile, wore an all-white suit and looked like an Italian mafia overlord with his thin, fake moustache. 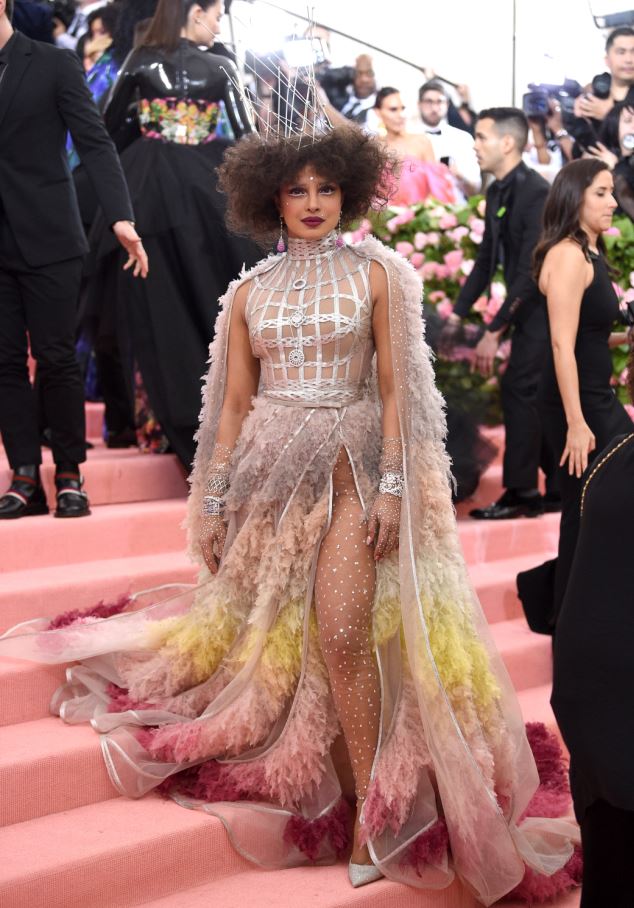 Also read: Game of Thrones fans spot Starbucks cup in episode 4, ‘Was it too dark to notice?’ asks Twitter

This is Priyanka’s third appearance at the Met Gala and second with Nick. The two represented fashion designer Ralph Lauren’s creations at the 2017 event. It was also one of their first dates with each other. Ralph later designed Priyanka’s wedding dress and the outfits for the entire bridal party.

The theme for this year is Camp: Notes on Fashion. It is inspired by Susan Sontag’s 1964 essay, Notes on Camp. In her essay, Susan defined ‘camp’ as: ‘The essence of Camp is its love of the unnatural: of artifice and exaggeration.’

Giving her own spin to campy fashion, Deepika Padukone showed up in a pink ball gown designed be Zac Posen. She wore her hair big and puffy with a pink hairband. She completed her look with large earrings and a silver bracelet. See more pics:

Other stars spotted on the ’pink’ carpet were Game of Thrones star Sophie Turner with husband and singer Joe Jonas. The two wore matching colourful outfits and Sophie even put silver glitter in her hair. More shocking costumes were worn by singer Katy Perry who arrived looking like chandelier; actor Jared Leto who carried his own severed fake head; and Lady Gaga who stripped to her underwear on the red carpet. Spider-Man: Far From Home actor Zendaya impressed everyone with her lit-up blue Cinderella dress.