Oil soared past $70 a barrel for the first time in more than a year after an attack on a Saudi Arabian oil facility, stoking fears that it will feed through to fuel prices in India and complicate the central bank’s plan to tame inflation and spur growth.

The late Sunday attack on the Saudi Arabian oil storage tank farm by Yemen’s Houthi rebels further fuelled the rally. Saudi Arabia accounts for about 10% of global crude supply and is the second-largest seller of oil to India. 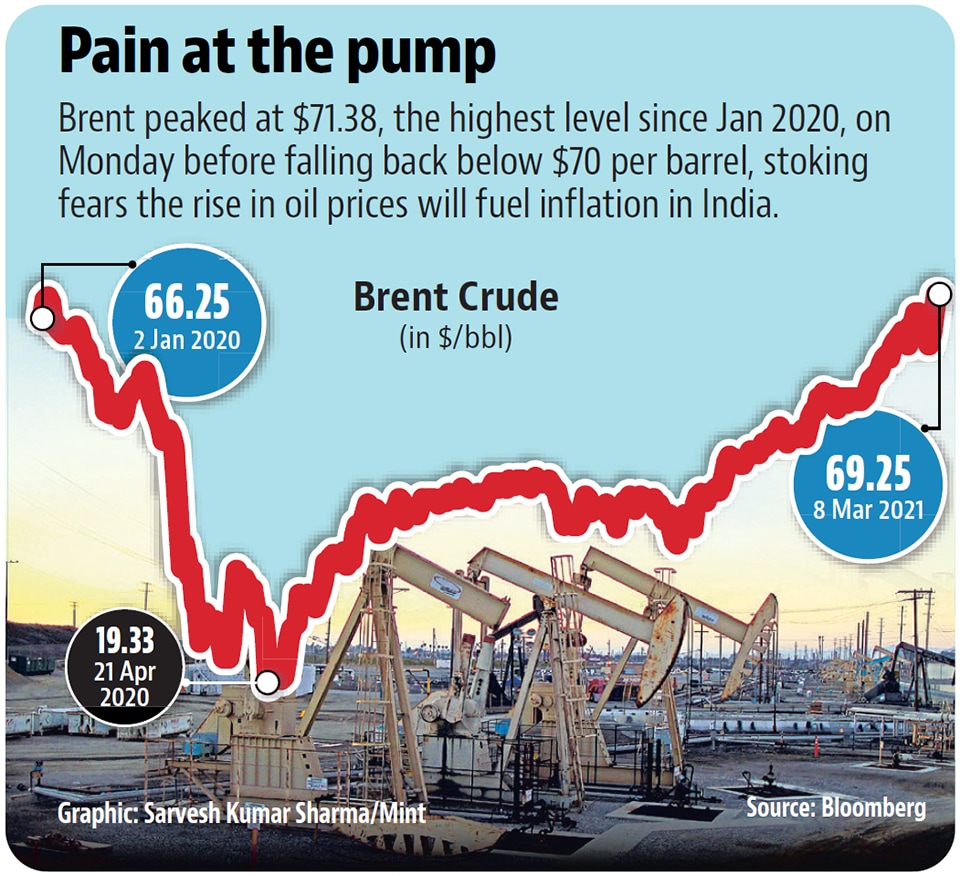 Rising crude prices will add pressure on an economy that’s heavily dependent on imports and has just exited a deep recession.

Lower oil prices in the past year had helped the government collect higher taxes on fuel amid a slump in tax revenues.

Retaining the high taxes without further angering the middle class will become a challenge for the government.

Higher fuel prices are also likely to stoke inflation at a time the central bank is trying to accelerate economic growth by keeping interest rates low.

“Increasing crude oil prices have meant a sharp increase in retail prices of petrol and diesel in the domestic market. Prices of petrol have crossed the psychological Rs.100 a litre mark in some cities, leading to increasing public outcry against the high prices and the inflationary impact of the auto fuels,” said Prashant Vasisht, vice-president of corporate ratings at ICRA Ltd.

While some states such as Assam and Tripura have cut tax on fuel, the central government has resisted a reduction in excise duty rates on auto fuels so far, owing to its tight fiscal position because of the pandemic.

“Given the rising burden on the public, the state-run oil marketing companies may go slow on automatic pass-through of the rise in international oil prices to consumers,” said Vasisht. “The marketing margins of oil marketing companies have been higher than the past long-term averages. However, they may witness pressure in the near term if they pause fuel price changes as per the pricing formula.”

Retail prices of cooking gas have also risen by 43% to Rs.819 a cylinder now from Rs.574 in March last year.

The sharp rise in prices comes ahead of crucial assembly elections in four states and one Union territory, including West Bengal and Tamil Nadu, over the next two months.

Market sentiment also tracked global shares, which were mixed as initial optimism over the US Senate’s passing of a $1.9 trillion stimulus bill gave way to inflation fears.

Moreover, the rupee declined by 23 paise to close at 73.25 against the US dollar, extending its losses for the third session in a row due to rising crude oil prices and strengthening of the American currency in the overseas market.

The dollar, meanwhile, rose to a three-and-a-half month high against a basket of six currencies globally.