This age of the DTC buses has also started reflecting on its operational statistics. In 2015-16, the DTC used to operate 33,497 trips every day, which has now come down to about 30,000 trips on an average per day.
READ FULL STORY
By Sweta Goswami, Hindustan Times, New Delhi

The entire fleet of 3,760 buses run by Delhi Transport Corporation (DTC) has been officially declared “overage” this year, a first in the history of the state transport utility, which was set up in 1971, according to data accessed and analysed by HT.

The data also showed that 99% of the fleet has crossed the technical operational limit for low-floor CNG buses. The DTC categorises a bus as “overage” after a run of more than eight years. As per the procurement contracts under Jawaharlal Nehru National Urban Renewal Mission (JNNURM), the maximum operational life of a low-floor CNG bus is 12 years or 750,000km, whichever is later.

Even if the 2,990 cluster buses, which are run by private operators, are included, Delhi’s current state run buses strength goes up to 6,750 only.

Delhi transport minister and chairperson of DTC Kailash Gahlot said the issue has been extensively discussed in recent board meetings of the corporation. 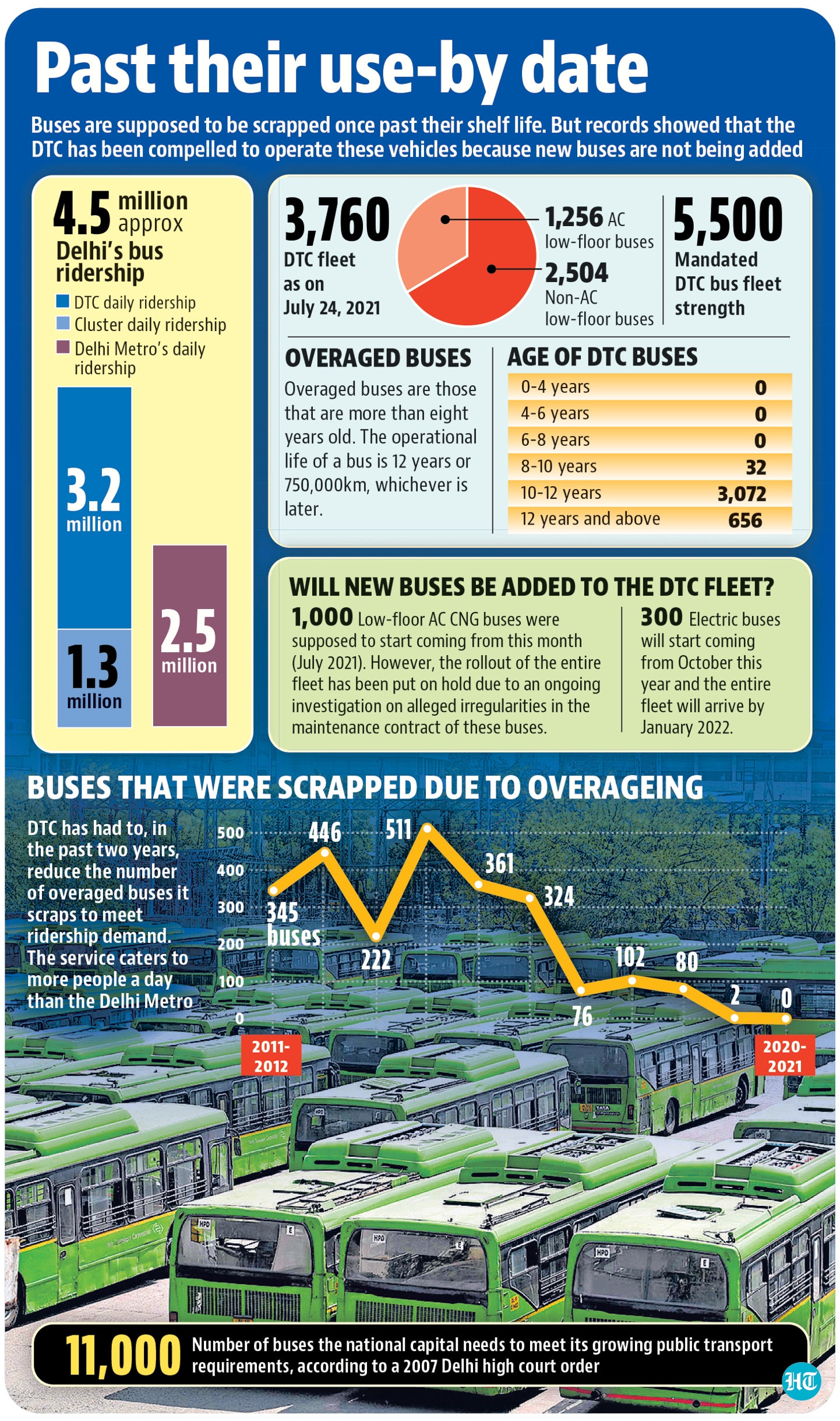 “Yes, it is true, and chief minister Arvind Kejriwal has also expressed concern as our state-run buses are the lifeline of Delhi’s public transport. Our DTC and cluster buses together carry at least one million passengers more than the Delhi Metro every day. So, we planned a revival of the DTC by pumping in 1,300 new buses in the next seven months,” he said.

It has been difficult for the DTC to get a successful tender for procurement of buses. Records seen by HT showed that the last time DTC finalised a tender was in 2008, and buses from that tender kept coming in small batches till October, 2011. After that, the DTC floated five tenders between 2013 and 2019, but none of them could be executed either due to unreasonable comprehensive annual maintenance contract (CAMC) or due to lack of enough bidders. It was finally in 2020 that a tender for 1,000 AC low-floor CNG buses was finalised with two bidders getting the contract in 70:30 ratio.

However, allegations of irregularities in CAMC has indefinitely delayed the acquisition of 1,000 AC low-floor CNG buses. A probe committee appointed by lieutenant governor Anil Baijal has given a clean chit to the DTC over the tendering and procurement of the buses. The three-member panel, however, recommended floating fresh tenders for its AMC over what it described as “procedural lapses” arising out of a “bona fide decision-making process”.

Gahlot said, “The DTC and I personally worked for months to make this tender successful. This was the DTC’s biggest achievement in 12 years as all earlier bus tenders kept failing...We hope that of the 1,300 buses, at least 300 electric buses for which the work order was issued in March this year, is not obstructed. People need more buses and this has been reiterated not just by the Delhi government but also the Supreme Court and high court.”

Once the buses attain their shelf life, they are ideally supposed to be scrapped. However, records showed that because new buses are not being added, DTC has been forced to operate all such buses. No buses have been sent to the scrapyard in the current financial year, and only two buses were scrapped in 2020-21. In 2019-20, 80 buses were withdrawn from operations owing to age-related maintenance problems. Between 2011 and 2017, 368 buses were scrapped on an average annually with 2,209 vehicles being withdrawn during this period.

But running old buses is pushing up maintenance costs.

Vijay Bidhuri, managing director, DTC, said the situation has been so precarious that the corporation urged the state transport authority (STA) to allow its buses to ply till the age of 15 years. “There was no other way but to run them beyond their prescribed age. Fortunately, the STA has now allowed us to operate DTC buses till they attain 15 years. But, this is only a stop-gap arrangement. It has given us 2-3 years maximum to replace our entire fleet. We need to add new buses to DTC’s fleet because our expenditure on maintaining these old buses is also increasing. Even as we are running overaged buses, we cannot compromise on safety and have to keep the buses in their best possible condition, which is an expensive affair,” he said.

This age of the DTC buses has also started reflecting on its operational statistics. In 2015-16, the DTC used to operate 33,497 trips every day, which has now come down to about 30,000 trips on an average per day.

Annual internal audits by the DTC have also shown that an overaged fleet was a key factor in low productivity. Besides, the number of breakdowns have gone up because the entire fleet is composed of low-floor buses as mandated by the high court and Supreme Court to make public transport more accessible to the disabled. Low-floor buses have lower ground clearance, because of which they are more vulnerable to breakdowns, especially where roads are not in good shape or flooded stretches.

Anumita Roychowdhury, CSE’s executive director and in-charge of research and advocacy, said because 100% of DTC’s fleet is “overaged”, the effective increment of Delhi’s bus fleet size has been very small. “Around 700 new buses have been added since 2019 in Delhi, but this is only under the cluster scheme. The DTC continues to operate with old buses, which effectively nullifies the increase in the city’s bus fleet because 56% of it constitutes DTC buses. Clearly, Delhi still needs a lot more buses to match the requirement of 11,000 buses as prescribed in the route rationalisation study by the Delhi government, and also to meet the growing demand,” she said.