As Modern School reaches a milestone on October 20, a look at the institution’s deep-rooted connection to the city and country.

On May 24, 1912, the khazanchi (treasurer) of the Imperial Bank of India, Rai Bahadur Lala Sultan Singh, wrote a letter to his 17-year-old son after touring Cambridge University in England. Remarking that there were about 20 “first-class colleges” there, he wrote: “The sons of rich people mostly come to the university (Cambridge) as it is rather expensive and it is they who take the most prominent part in the affairs of the British Empire. They are not like our rich people who say, parh kar kya karna hai... koi naukri thori karni hai (What is the use of studying… it’s not like one needs to find a job).”

Eight years later, his son, Raghubir Singh, started a school in a haveli in Daryaganj right across the road from freedom fighter Dr MA Ansari’s home. Singh, then in his mid-20s, was clear about what he wanted from the school: it must be co-educational; the girls were to be given the same opportunities as the boys; the arts were as important as the other subjects; training in English was mandatory, so was a rootedness in home-grown, traditional systems of knowledge. But Singh’s agenda was also set: a new generation of Indian leaders, who would take charge of the country some day, had to be built. 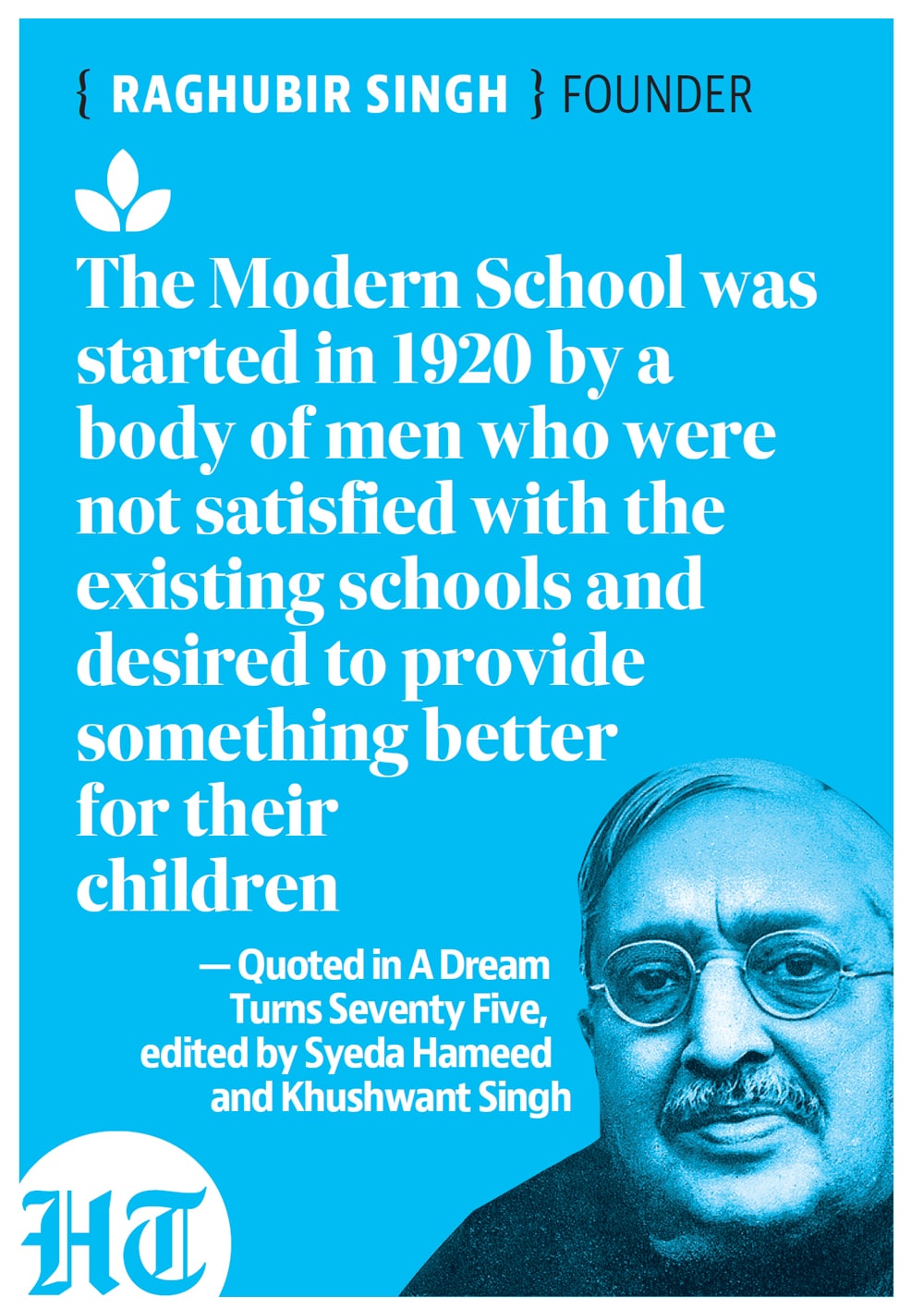 Several noted artists, writers, diplomats, legislators, members of the judiciary, sportspersons and businessmen and women are alumnae of the school, from former West Bengal governor Gopal Krishna Gandhi to from NITI Ayog chief executive officer Amitabh Kant, contemporary artist Nilima Sheikh and Shekhar Kapur, who directed the Oscar winning film Elizabeth, to journalist and former Hindustan Times editor Khushwant Singh. Both the World Cup winning cricket teams had a Modernite: Kirti Azad in 1983, and Gautam Gambhir in 2011. Even former Prime Minister Indira Gandhi studied at the school for a brief period soon after it was first established.

What’s more, the connection between Modern School and the Capital is intricate. Many of the Indian engineers and contractors who worked with Edward Lutyens and Herbert Baker — lead architects of the imperial team tasked to build New Delhi from ground up — supported Raghubir Singh’s quest to build a school.

This included Sobha Singh and Teja Singh Malik — both of whom were later knighted — as well as Baisakha Singh, Narain Singh, and Rai Bahadur Devi Singh, all of whom were responsible for many of the structures on the Central Vista, as well as the laying of the roads and sourcing the material for much of the construction. Another early proponent of school was Sushil Kumar Rudra, then the principal of St Stephen’s College.

The school started with six students; by the end of the first year there were 12. Among them were Raghubir’s three children, Malik’s son and daughter Kaval (the only girl in the first batch), Devi Singh’s two sons, and Sobha Singh’s two boys, including Kushwant Singh. Kamala Bose, formerly the principal of a girls’ high school in Dehradun, was the principal of the new school.

“No location could be imagined more suitable than Delhi so rich in historical associations, and yet — as the hub of the country’s political life, and a notable centre of its intellectual activity — so progressive in its outlook,” Raghubir Singh wrote in his records.

After more than a decade after operating from 24 Daryaganj, the school moved to an exposed red-brick building on Barakhamba Road designed by Charles George Blomfield (who was part of Lutyens’ team) and his brother, Francis.

Between Sultan Singh’s letter of 1912, and the setting up of Modern School in 1920, much happened. The decade was a period of major policy decisions by the British with respect to education, writes Ajay Sharma, author of A History of Educational Institutions in Delhi. For instance, at the Delhi Darbar itself — held in December 1911 to mark the shifting of the capital from Calcutta — “it was announced that Rs 40 lakh would be distributed for the promotion of popular education in India”. When the Capital Committee was formed, a plan was also proposed to create education institutions for people from all around India to receive “instruction in modern subjects”, thus laying the ground for the setting up of Delhi University in 1922.

Thus, private entrepreneurs with means and deep community ties, propelled by the desire to see an independent India, turned to creating institutions.

Indian philanthropists were also imbued with the nationalist spirit, with an idea of a composite India,” said Professor Rakesh Batabayal, who has written The Modern School (1920-2020): A Century of Schooling in India. For instance, Lala Sultan Singh didn’t just advance Rs 5,000 to his son to start Modern School; back in 1902, he had also saved Hindu College from losing its affiliation with Punjab University by housing it in one of his buildings in Kashmere Gate.

“It was in the wake of Mahatma Gandhi’s appeal that Modern School was born. In the same year, certain other institutions were established: National Muslim University of Aligarh (later Jamia Millia Islamia), Gujarat Vidyapith, Bihar Vidyapith… they worked independently of the official system, trying to revive the ideals of the ancient Hindu or Muslim education,” writes former Planning Commission member and Modern School alumna, Syeda Hameed, in A Dream Turns Seventy Five, a book that she co-edited with alumnus Kushwant Singh on the occasion of the 75th anniversary of Modern School.

Yet, as Hameed points out, there was little in the public school mould which was accessible to the common people until Modern School.

“The founder was barely 25-years-old when he started the school, but he visualised that one day, India would be independent. At that point in time, it would require a cadre of people who believed in India for India and also had the necessary education to be able to help in the governance and administration of a newly independent country,” said Ashok Pratap Singh, senior trustee of the school and grandson of Raghubir Singh.

A provision for the arts

“I don’t remember studying at all. My memory is permeated entirely with my participation in theatre and arts. The school taught me the interconnectedness of practice and theory, and this is something that I took with me to the National School of Drama. The pyramid was not built in a way that the exam was on the top,” said Anuradha Kapur, former director of the National School of Drama, who studied in Modern School from 1955 to 1968. She recalled, in particular, the plays that noted Hindi writer and theatre director Ved Vyas — a faculty member who joined in 1948 and went on to become the first principal of the Vasant Vihar school — put up.

Alumnus justice Sanjay Kishan Kaul, who served as a chief justice of the Madras and the Punjab & Haryana high courts before he became a Supreme Court judge, said that he earned his acting chops in Hindustani theatre under Om Shivpuri, a former faculty member of the Barakhamba Road school. Justice Kaul (61) joined as a kindergartener in 1964. In ’76, his final year of school, he played Moliere’s miser in the Hindi adaptation, Kanjoos.

“The Arts did not used to pay well at the time, but the school would pick the best people in the field as members of the faculty. Our principal [MN Kapur] would say, apart from a good academic record, each student should have one hobby and be good in one sport. So it was not unusual for us to stay back and practice for functions. Each student was encouraged to participate,” he said.

One of the first appointees of the school was Sarada Ukil, a proponent of the Bengal School, who went on to design the school’s crest. Ram Kinkar Baij created a sculpture that still rests in the school, and Sukumar Bose painted a mural that adorns the Hall of Religions, the prayer hall of the school, which was inaugurated by Rabindranath Tagore in 1936. All three taught art in the school. Later, well known artist-couple Kanwal and Devayani Krishna, and modernist sculptor Amarnath Sehgal, noted photographer OP Sharma among others, also taught there.

“Modern School offered an education system that would not only make girls and boys competent enough to work wherever they wanted but also awaken them to the need of the times in terms of their participation in the freedom struggle,” said Manju Rajput, principal of Raghubir Singh Junior Modern School.

The push to focus on issues beyond the classroom is strong even today.

Meenakshi Sahni, principal of Modern School Vasant Vihar, says that in 2015, students, parents, alumni and teachers from all branches of the schools took out a march to India Gate to protest against air pollution. “It happened much before this whole debate on air pollution in Delhi had begun. The environment has been one of the key areas we do work on.”

“Our students are representing the country internationally in other games as well including squash, swimming, and golf. We have been judged as one of the best schools in sports,” said Barakhamba Road principal Vijay Datta.

Most alumni have a busy social calendar — from sport competitions to theatrical productions, felicitation ceremonies to dinners — all organised by the Modern School Old Students’ Association (MSOSA). The association was formalised in 1967, but it came into being a decade before, said former president Sunder Hemrajani. The idea was to “bring old Modernites from different walks of lives together and carry on a relationship with the school, develop a bond with the current students. It’s become a part of the school’s legacy”.

Justice Kaul, the chairperson of the Modernites Trust, which provides scholarships to students from economically weak sections and even runs various programmes for retired teachers, admits that “for a day school, such bonding is unusual.” “There is great loyalty to the uniform. The joke went that Modern School students don’t get out of it even when they go home,” he said.