One of three raped minors drop out of school: DCPCR study

Of the 100 minor rape/sexual assault survivors, 33% dropped out of school and only 9% have plans to resume studies, the survey said for which the commission had interviewed 94 girls and 6 boys.
READ FULL STORY
Hindustan Times, Gurugram | By HT Correspondent

One out of every three children, who have faced sexual abuse, drop out of school in the national capital, a study by the Delhi Commission for Protection of Child Rights (DPCPCR) revealed on Tuesday.

Of the 100 minor rape/sexual assault survivors, 33% dropped out of school and only 9% have plans to resume studies, the survey said for which the commission had interviewed 94 girls and 6 boys. The study also showed only 15% of the survivors received compensation from the government which ranged between ₹30,000 and ₹50,000. The Human Development Society (HDS) collaborated in the study, which was aimed at finding out the difficulties and needs of minor victims of rape and sexual assault and the challenges faced by them. 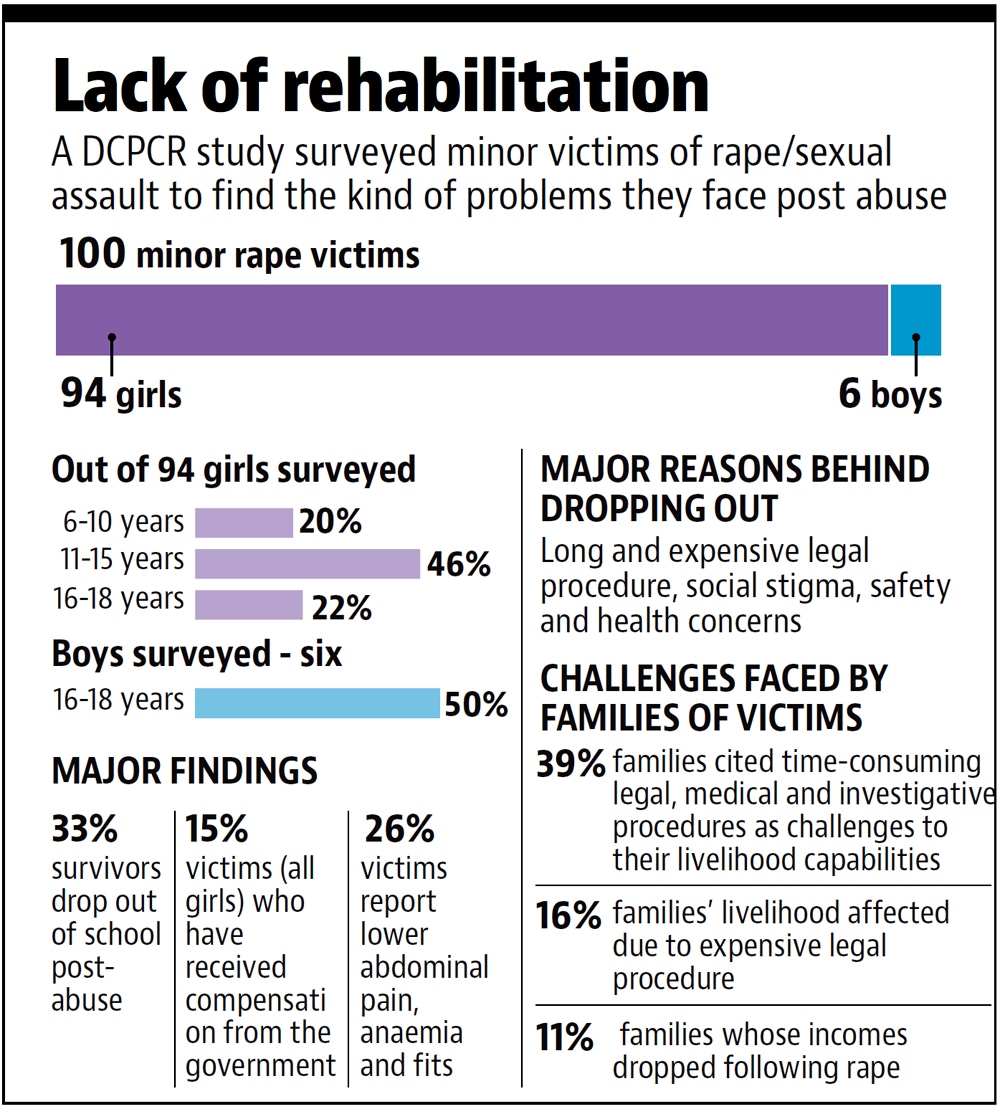 The study found that more than half (55%) of the families of such survivors face different types of challenges in providing education to their children such as low income (57%) and safety and security of children (47%). About 15% noted other challenges such as non-enrolment in school, irregularity due to stay in shelter home, speech disorder, bad health and physical disability. Lack of interest and poor academic performance were seen as challenges by another 15%. Also, it was found that many of the girl survivors showed signs of withdrawal and self-imposed isolation post abuse, which is also a major reason behind dropping out.

“These findings clearly indicate inadequate potential of most of families to access welfare, legal and other services that are essential for the victims. The present scenario is bleak when it comes to providing support and services for rehabilitation and corrective measures need to be taken,” said Jyoti Rathee, member DCPCR.

According to Ramesh Negi, chairperson, DCPCR, “In most cases the survivors are suffering from post-traumatic stress disorder (PTDS), which requires constant support and counselling to overcome. Also, the health complications are serious and the compensation usually given is neither adequate nor timely adding to the stress of both the victims and their families.”

As per data shared by the panel, 932 cases were registered by the Delhi Police under Protection of Children from Sexual Offences (POCSO) Act in 2017-18. Of these, 849 were minor girls while 83 were boys. The 100 survivors interviewed by the commission were of the cases reported in 2017-18.

Smile Clubs and a mobile app

The child rights panel also announced setting up of around 10-15 smile clubs with at least one in each Delhi district, as a pilot project to focus on the rehabilitation of victims. “We are in the process of empanelling NGOs to set up these smile clubs. Even though victims get legal aid post abuse but the overall health and mainstreaming of the victim back in society are left out. The clubs will focus on this including psychological rehabilitation on continuous basis, monitoring education difficulties, health status and facilitating medical care in hospitals, among others,” said Negi.

A mobile application, which could be used by children as well as public at large to report any form of sexual abuse was launched by Deputy chief minister Manish Sisodia, who joined the event.