On Friday, the Election Commission announced dates for the assembly elections in West Bengal, where the BJP is determined to win power. Polls in the state will be held in eight phases from March 27 to April 29.

West Bengal’s political narrative projects a bipolar electoral contest between the ruling Trinamool Congress (TMC) and the Bharatiya Janata Party (BJP),with the Communist Party of India (Marxist), or CPI(M), and its Left Front partners, the Congress and cleric Abbasuddin Siddiqui’s Indian Secular Front trying to emerge as a viable third contender in parts of the state.

On Friday, the Election Commission announced dates for the assembly elections in West Bengal, where the BJP is determined to win power. Polls in the state will be held in eight phases from March 27 to April 29.

The schedule was announced in the backdrop assertions by chief minister Mamata Banerjee that the political battle between her TMC and the BJP was a personal battle as well; she has cited the Central Bureau of Investigation’s (CBI) investigation into a coal smuggling racket in which the agency has questioned her nephew and Lok Sabha MP Abhishek Banerjee’s wife and sister-in-law. “Threats of jail sentence cannot scare us. We have stood before guns in the past. We won’t be scared of fighting rats. I will not surrender as long as I am alive...,” Banerjee said at an event in Kolkata on January 21.

To oust her government, the BJP is on a war footing. Prime Minister Narendra Modi has visited Bengal thrice in 30 days, followed by Union home minister Amit Shah, BJP president J P Nadda and over 30 Union ministers and senior BJP leaders from other states who Banerjee calls “outsiders with no roots in Bengal.” The party is organising over a dozen events every day.

Bengal BJP spokesperson and convenor of the party’s Kolkata zone election committee, Debjit Sarkar, said, “This election is about getting relief from the misrule, anarchy and nepotism established by the TMC since 2011. This poll is about building a golden Bengal and establish democracy. We hope holding the polls in several phases will help counter the electoral malpractices the TMC has expertised in.”

To trace the growth of the BJP vis-à-vis that of the TMC’s, political experts often look back to 2009. In the 2009 Lok Sabha elections, when the TMC was not in power, the Left Front secured 43.3% votes but won only 15 seats. In comparison, 19 seats went to the TMC although Mamata Banerjee had a lower vote share of 31.18%. In that election, the BJP secured only 6.14% vote share and one seat. 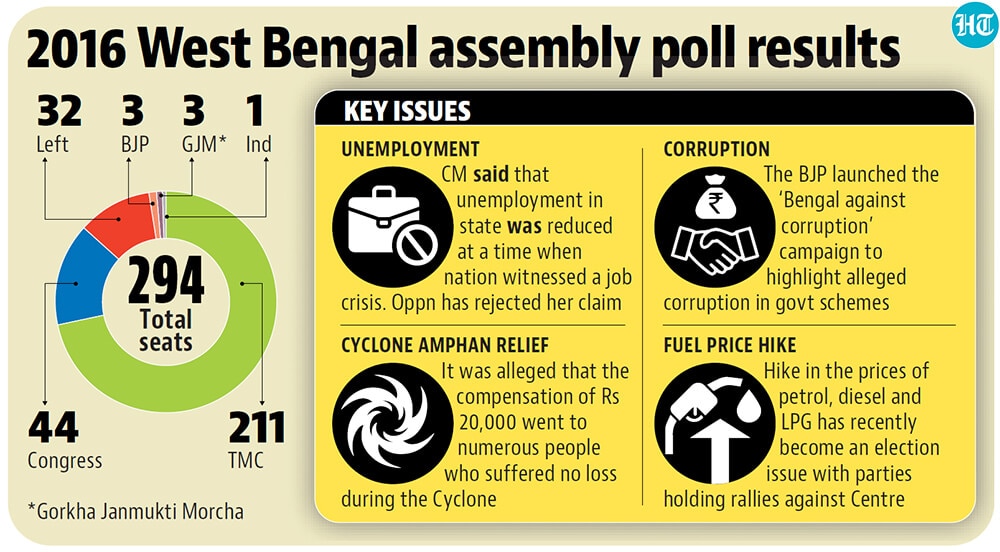 The BJP has drastically improved its position since then, winning two Lok Sabha seats in 2014 and 18 in 2019. In terms of the assembly segments, the BJP is already ahead of the others in 122 assembly seats in 2021 and the TMC is leading in 163.

The most impressive achievement of the BJP in the last election was its penetration into regions with a substantial tribal presence, such as the districts of Purulia, Bankura, West Midnapore and also parts of north Bengal where it managed to win seven of eight Lok Sabha seats.

The BJP’s success in north Bengal and the south Bengal districts of Malda, Nadia and Hooghly is seen as a sign of its popularity among Hindus who are either descendants of refugees from Bangladesh or who crossed the border into India to escape religious persecution.

The same reason applies to the Dalit Matua community that helped the BJP win the Bongaon Lok Sabha seat in North 24 Parganas district. In the same district, the support of Hindi-speaking people from Bihar and other states helped the saffron camp win the Barrackpore Lok Sabha seat as well.

Politicians from across the spectrums concede that religion, caste and creed have been never so important in any Bengal election in the past as they are in the upcoming contest.

Bengal Congress president Adhir Ranjan Chowdhury said, “Only a multi-phase polling can stop electoral malpractices we have seen in the past.”

CPI(M) politburo member Md Salim also questioned the multi-phase polling. “This was jointly decided by the TMC and the BJP who are partners. How come everybody knew in advance that polls will be held in multiple phases?” Indian Secular Front leader Abbasuddin Siddiqui threw a fresh challenge at Banerjee, saying a member from of his family will contest the Nandigram seat (in East Midnapore district) that she decided to contest after it was vacated by her aide-turned-adversary, BJP’s Suvendu Adhikari.

The most important role, poll contenders say, is going to be played by Muslims.

According to the 2011 census, Bengal’s population stood at 91.3 million. It was projected to reach 101.9 million in 2021 and around 30% of this population comprises Muslims.