With IAF retiring its MiG-27s, the Kazakhstan Air Force will be the only one in the world to use the aircraft.

The Indian Air Force (IAF) will on Friday phase out the last of its MiG-27 jets at a ceremony to be staged at the Jodhpur air force station, 35 years after it inducted the ground attack fighters. With the MiG-27 flying into the sunset, the air force will have no variable-geometry fighters -- with swing-wing capabilities -- in its inventory. 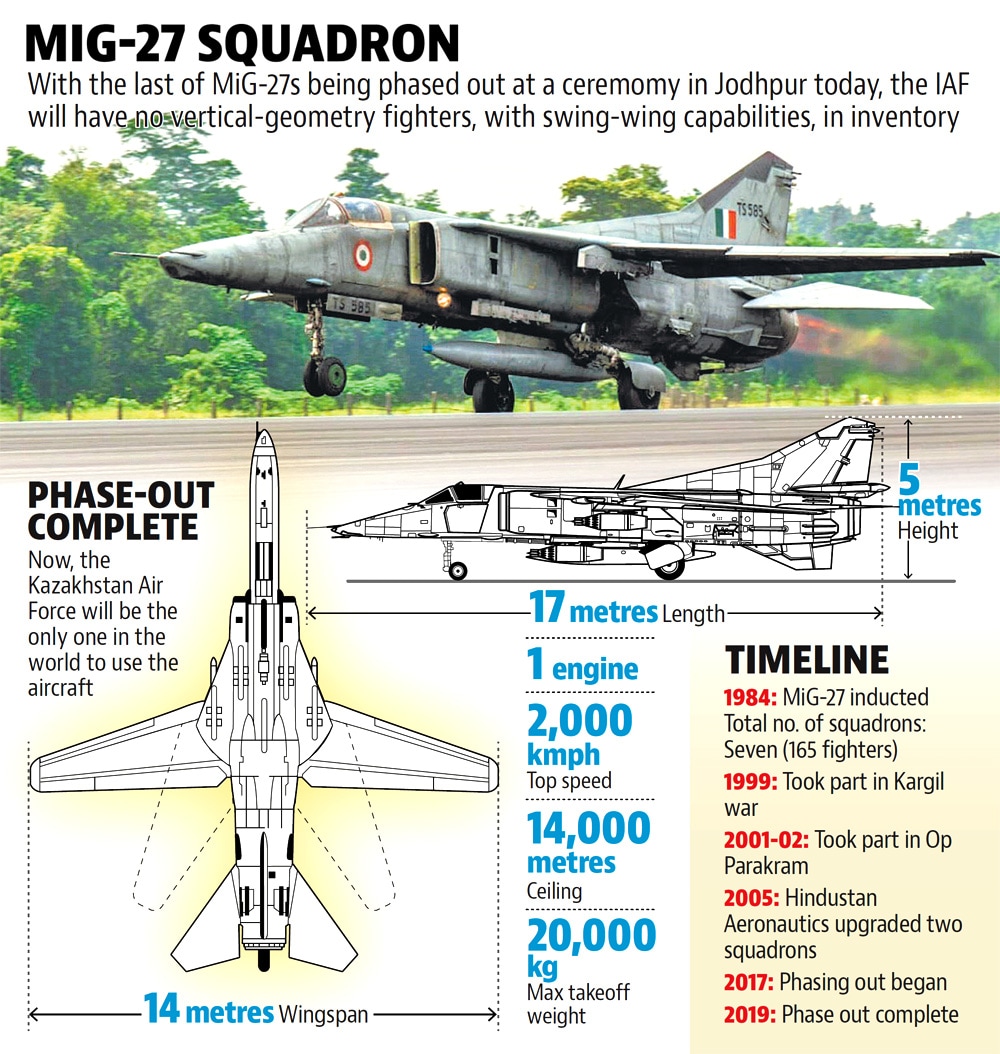 With IAF retiring its MiG-27s, the Kazakhstan Air Force will be the only one in the world to use the aircraft. “These aircraft have made immense contribution to the nation, both during peace and war. The fleet earned its glory in the historic Kargil conflict when it delivered rockets and bombs with accuracy on enemy positions,” the defence ministry said in a statement released in Jaipur on Thursday.

Several MiG-27 pilots HT spoke to said the single-engine fighters were used for the first time to attack targets at high altitude during the 1999 Kargil war with Pakistan. Then flight lieutenant K Nachiketa was taken prisoner of war during the Kargil war after his MiG-27 went down.

“It was an experiment as the fighters had never struck targets at high altitudes. The MiG-27s were successful during Kargil and helped build pressure on the infiltrators. The fighters bombed out a lot of targets,” said Air Marshal KK Nohwar (retd), director general, Centre for Air Power Studies. He commanded a MiG-27 squadron in the early 1990s and has flown more than 400 hours on the swing-wing fighters. The MiG-27s could swing their wings from 16 degrees to 72 degrees depending on the mission -- flying at 45-degree sweep, making a getaway after delivering payloads at 72 degrees and taking off and landing at 16 degrees. A swing wing is important for aircraft with supersonic capabilities because such aircraft also have to sometimes fly at subsonic speeds. A swept wing reduces drag and offers a streamlined shape during supersonic flights. At subsonic cruising speeds, it could be unswept. However, subsequent platforms, with fly-by-wire abilities, made swing-wing aircraft , which were heavier and more complex, redundant.

“At 72-degree sweep, the MiG-27s could strike targets and swiftly exit the combat zone. In that wing position, the fighter looked like an arrowhead,” said Nohwar. The IAF operated 165 MiG-27 fighters, around 40 of which were upgraded by state-owned Hindustan Aeronautics Limited 2005 onwards. The phasing out began a few years ago. The Number 29 Squadron in Jodhpur is the only air force unit operating the upgraded MiG-27s. The safety record has come into question over the past two decades with IAF losing a dozen jets to accidents. “The MiG-27 swing-wing fighter aircraft has been the backbone of ground attack fleet of IAF. The upgraded variant of this last swing-wing fleet has been the pride of IAF since 2006. All the other variants such as MiG-23 BN and MiG-23 MF and the pure MiG-27 have already retired from the IAF,” a ministry spokesperson said. He added that fleet took part in Operation Parakram, the military’s largest mobilisation after the 1971 Indo-Pak war, in 2001-02. HAL gave the aircraft an avionics upgrade, superior navigation systems and improved targeting accuracy with the integration of Israeli and Russian technology. A serving IAF officer and a MiG-27 pilot said the phasing out of the fighters would be an important part of the country’s military aviation history.