Slowly but surely, air pollution is becoming a politically salient issue, at least in the national capital. Advertisements featuring the Delhi chief minister claiming a 25% reduction in five years have been followed by an inevitable push back from the Opposition on who deserves credit. Air quality may have finally become an election issue! In July, the Union environment minister had claimed improved air between 2016 to 2018.

It is important, however, to tread with caution and for governments to understand that they must adopt a systematic and transparent process to track air quality improvements over the years.

The difficulty in credibly tracking air quality arises from problems with the underlying data. One set of data relies on manual monitoring, and has been the basis of submissions to Parliament. Another set is based on continuous and automated monitoring, which is more reliable, but incomplete. We discuss the use and pitfalls of each of these below.

The first is the Central Pollution Control Board (CPCB) data submitted in the Parliament that come from the manual monitoring stations of the National Air Quality Monitoring Programme (NAMP). Chart 1 illustrates the annual averages of PM 2.5 (the main pollutant) for Delhi, using data submitted to the Parliament for 2014-2018, supplemented for 2012 and 2013 by information from CPCB’s 2013-14 annual report. 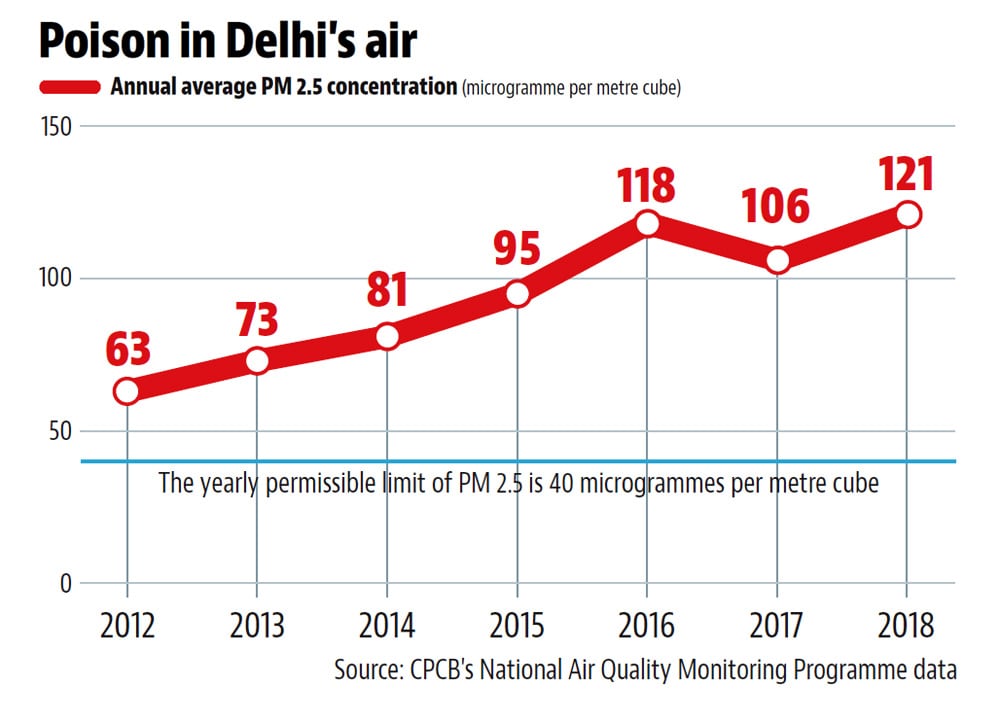 Contrary to a reduction, PM2.5 levels have nearly doubled from 2012 to 2018. However, the data used to compute annual NAMP averages is not available publicly, and are therefore hard to verify, and readings are taken infrequently. Therefore, this is unlikely to be a robust basis for tracking Delhi’s air quality.

The parallel continuous monitoring network has more official monitoring stations, greater transparency, and much greater frequency of measurement. However, here the challenge for comparisons across years is to ensure continuous unbroken data from a consistent set of monitors, because air quality levels can vary substantially across a city like Delhi, and over the course of the year. Publicly available data has several data gaps that make like-for-like comparisons very difficult. This is precisely the challenge in Delhi, as can be seen from Chart 2. Even for a recent period like 2016-2018, these data issues inhibit any straightforward claims on air quality improvements. For earlier years, the number of monitors with reliable data are paltry. In 2011, we would have to rely on one monitor – at ITO. Between, 2012-2014, we have 1-3 reliable monitors, but often with additional issues such as entire months missing. If we had to compare ITO data in 2011 with 2018, PM2.5 levels see a modest 12% reduction. But can we confidently make strong claims on air quality improvement on the basis of such scarce information? Unambiguously, no.

On the positive side, Delhi’s monitoring network had become more robust in 2018, and will serve as a good basis for comparison in the future. With the National Clean Air Programme, the monitoring network in Delhi and 121 other cities will be expanded further, and cities have a 20-30% reduction target to achieve by 2024. However, without a well-defined assessment process established up front, we risk future debate about progress achieved. Such a process needs three components.

One, an assessment method that specifies monitors to consider, reliability criteria, and statistics (annual average, extreme events etc) to use. Two, transparency in official reporting with analysis steps outlined, and all underlying data being publicly accessible. Three, results must be replicable, so that any interested citizen should be able to repeat the analysis with the data and find the same results if the same steps are followed.

Agencies such as CPCB have stated that air quality levels have improved in the last few years. As residents of Delhi, we hope that the air has indeed become cleaner, and urge the government to use reliable regulatory data available to them to assess and report this in a systematic, transparent, and replicable manner. This is not an issue around which we should allow lingering doubts and guesswork.