Analysis: BSP gained more than SP from their grand alliance

The only beneficiary of the SP-BSP alliance in Uttar Pradesh has been the BSP, which increased its seat tally from zero to 10 between 2014 and 2019.

The Samajwadi Party (SP)-Bahujan Samaj Party (BSP) alliance in Uttar Pradesh was perceived to be a major threat to the Bharatiya Janata Party (BJP) and the biggest game-changer of the 2019 Lok Sabha elections. The combined vote share of the BSP and the SP was 41.8% in the 2014 Lok Sabha elections, compared to the 43.3% of the BJP and its ally Apna Dal (AD). Adding the 2014 vote shares of the SP and the BSP would have reduced the BJP-AD tally of 73 seats to 37 seats.

The 2019 election results have shown that Narendra Modi’s chemistry prevailed over the arithmetic of the BSP-SP alliance. The BJP lost only nine seats compared to its 2014 tally, primarily because it managed to increase its 2014 vote share by 7.2 percentage points in the 2019 elections.

The only beneficiary of the SP-BSP alliance in Uttar Pradesh has been the BSP, which increased its seat tally from zero to 10 between 2014 and 2019.

Also read: Giriraj Singh gets panned for Iftar taunt, gets earful from Amit Shah too

This increase has happened with an almost identical vote share for the BSP in Uttar Pradesh.

The SP’s seat tally remained the same, while the BJP and the Congress lost nine and one seat respectively in the state compared to 2014.

Ironic as it may sound, it is the BSP which is now suggesting that it wants to end the grand alliance experiment.

The party has announced that it will contest the bypolls for 11 assembly constituencies in Uttar Pradesh alone. “We can’t ignore political compulsions. In the results of Lok Sabha elections in Uttar Pradesh, base vote of Samajwadi Party, the Yadav community, didn’t support the party. Even strong contenders of SP were defeated,” Maywati, the BSP president, said in a statement on Tuesday.

How credible are the BSP’s claims of SP’s core voters not supporting it during the 2019 polls? There is no way to ascertain whether voters from a particular caste group have voted for a party or not.

An HT analysis shows that both the SP and the BSP have performed equally badly in preserving their 2014 vote shares in 2019 and the BSP’s increase in seats could have been a result of BSP getting relatively safer seats in the seat-sharing formula. Here’s why.

The BSP and the SP contested 38 and 37 parliamentary constituencies (PCs) in Uttar Pradesh in the 2019 elections. This number was 80 and 78 in the 2014 polls. Of the 38 PCs which the BSP contested, the median change in the alliance vote share was a 2.8 percentage points decline compared to the 2014 vote share of the SP and the BSP.

This median change was a 2.1 percentage points decline for the 37 PCs contested by the SP. Using median as the average helps us capture the middle value in a distribution and helps isolate extreme values at either ends. 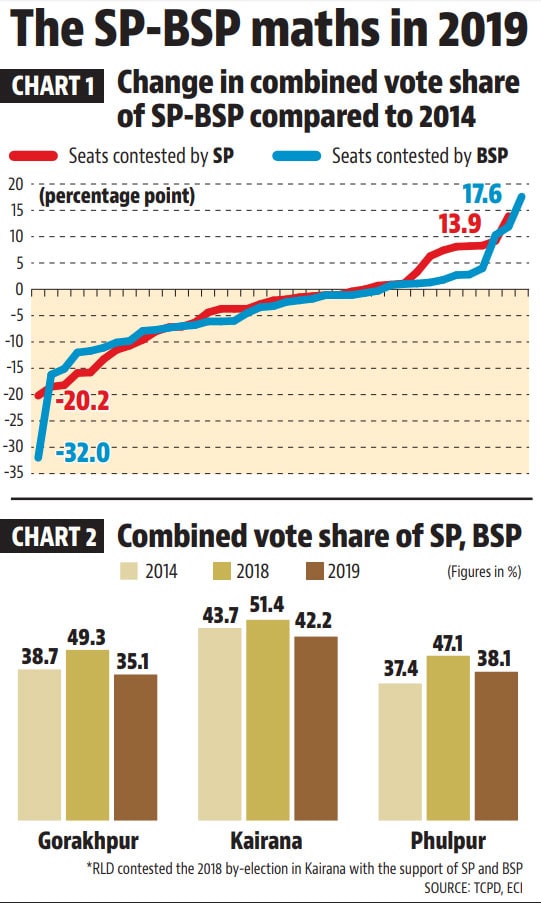 How did BSP do better in terms of winning seats compared to SP in Uttar Pradesh? One of the reasons could be the seat-sharing arrangement of the two parties, which gave BSP a higher share of seats where the combined vote share of the two parties was ahead of the BJP.

To be sure, the BSP was also better at retaining the seats where the alliance would have been ahead in 2014. It managed to win 39% of the 23 PCs where the combined vote share of the SP and the BSP was more than that of the BJP.

This number was just 28% for the SP. This suggests that perhaps the SP was less successful in exploiting the alliance to its advantage than the BSP.

To be sure, comparing 2014 and 2019 vote shares of the SP and the BSP does not capture the entire political story in Uttar Pradesh.

For example, the BSP has won the Saharanpur parliamentary constituency in 2019, where the combined vote share of the SP and the BSP was less than that of the BJP in the 2014 elections. This victory is perhaps the result of consolidation of Muslim votes, which led to Congress’s Imran Masood, being pushed to a distant third position in 2019. Similarly, the grand alliance lost Gorakhpur, Phulpur and Kairana in the 2019 elections.

These three PCs had elected BJP MPs in 2014, but the grand alliance won each of them in bypolls held in 2018, which generated a lot of hopes for the SP and the BSP.

The sharp reversal in bypoll and 2019 election results in these three PCs suggest that it is chemistry more than arithmetic which led to the poor performance of the SP-BSP alliance in Uttar Pradesh.