Chandrayaan 2 has been described as the most complex mission ever undertaken by the Indian Space Research Organisation (ISRO).

In just a few hours from now India’s second lunar mission-- Chandrayaan 2’s lander will attempt to touchdown on the Moon’s South Polar region making the country only the fourth nation to land a spacecraft on the lunar surface till date. The touchdown of the ‘Vikram’ lander is scheduled between 1.30 am and 2.30 am on Saturday, followed by the rollout of rover ‘Pragyan’ between 5.30 am and 6.30 am. Chandrayaan 2 has been described as the most complex mission ever undertaken by the Indian Space Research Organisation (ISRO).

Here are the ten points summarising India’s feat on moon:

1.The lander of Chandrayaan 2 named after the pioneer of India’s space programme, physicist Dr Vikram Sarabhai, will land on a “completely unexplored” region on the lunar surface on Saturday. Craters on the Moon’s South Pole have been untouched by sunlight for billions of years and will therefore provide undisturbed records of the origin of the solar system.

3. India will become only the fourth nation after the United States, Russia and China to land a spacecraft on the Moon. 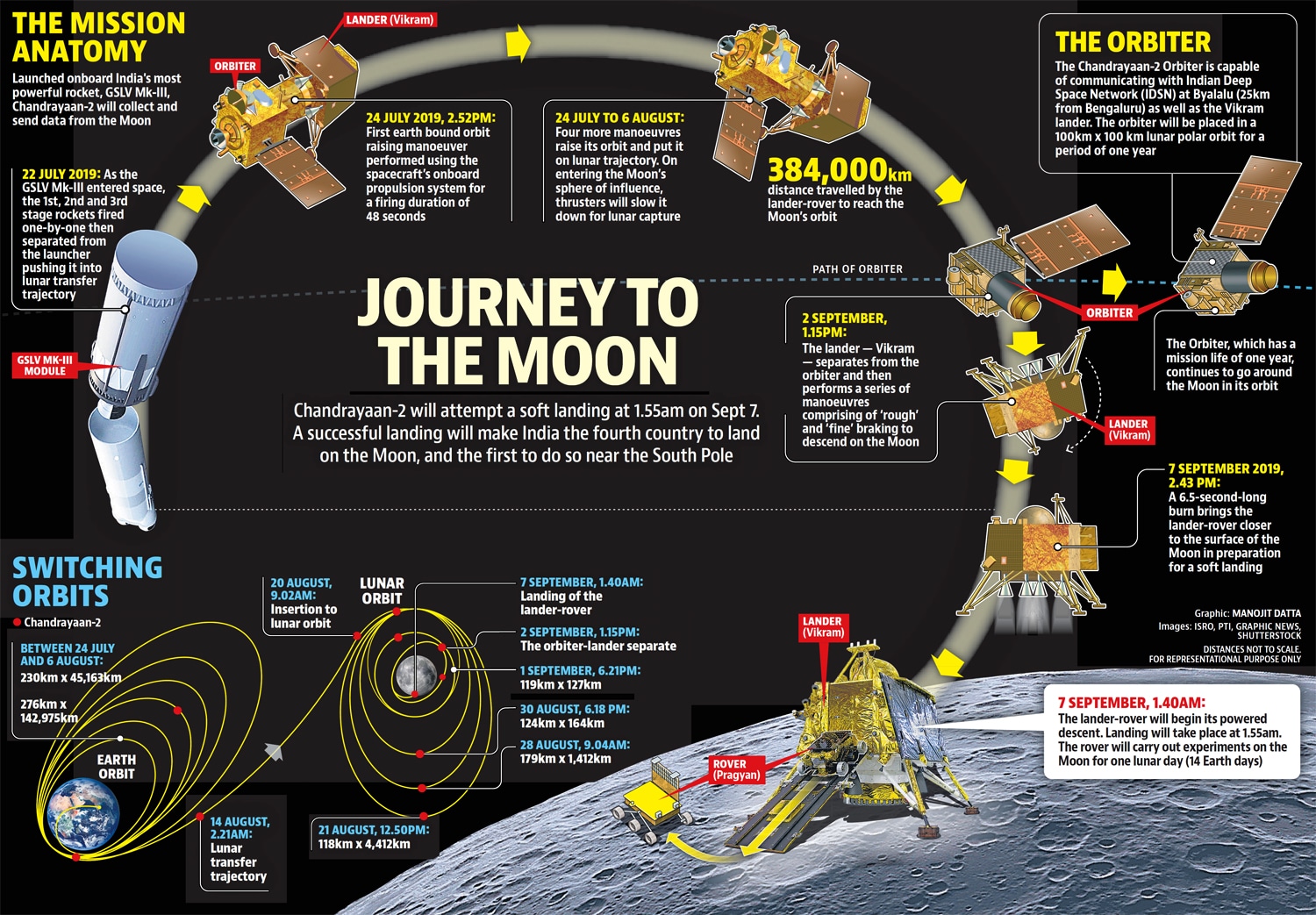 4. The lunar rover that will emerge from the spaceship will help scientists understand the origin and evolution of the Moon better after studying the area’s topography and minerals.

5. The last time humans were on the Moon was in 1972 when the US Apollo 17 mission took Eugene Cernan, Harrison Schmitt and Ronald Evans - and five mice Fe, Fi, Fo, Fum, and Phooey -- there and back, according to news agency AFP.

6. The Indian spacecraft carries an orbiter, the Vikram lander and a rover, all almost entirely designed and made in India.

7.If Chandrayaan-2 is successful, it could be the beginning of cheaper space missions, at a time when private players are tapping the race to space and attempting to make space exploration cheaper and profitable.

8.Prime Minister Narendra Modi accompanied by a team of schoolchildren will witness the historic landing live from the Indian Space Research Organisation’s headquarters in Bengaluru.

9. All moon landings have happened within 30 to 40 degrees north or south of the lunar equator. India is looking at being the first to land 70 degrees south .

10. Originally scheduled for July 15, Chandrayaan 2’s launch was aborted due to a technical snag at the eleventh hour before take-off. After fixing the problem in about a week, India’s second lunar mission was launched from Sriharikota on board the GSLV Mk III on July 22 at 2.43 pm.