The challenges facing the economy have transformed drastically in less than ten years. India has ended up with a demand-side problem within less than a decade of supply-side bottlenecks bringing down growth and pushing up inflation.
Share Via
Copy Link
Hindustan Times, New Delhi | ByRoshan Kishore

Before the global financial crisis hit the US economy in 2008, which soon converted itself into a global economic slowdown, the Indian economy had been growing at 8% (in constant dollar terms) for five consecutive years. At a time when the Reserve Bank of India (RBI) has projected India’s GDP growth to be 5% for the current fiscal year, and the economy has been losing growth momentum for six consecutive quarters, the pre-crisis economic performance seems like a dream run.

Back then, however, most people believed that the best was yet to come for the Indian economy. In the years India was growing at 8%, the Chinese economy was accelerating at double digit rates. Putting the economy in a sustained double digit trajectory was the cherished policy goal, even after the global economic crisis had disrupted the global economy.

“The first challenge before us is to quickly revert to the high GDP growth path of 9% and then find the means to cross the ‘double digit growth barrier”, the then finance minister Pranab Mukherjee said in his budget speech in 2010.

Such targets seem quite unrealistic today. Growth rates have gone down globally in the post-crisis world. The world economy has not been able to achieve its pre-crisis growth trajectory even a decade after the crisis. China, which was growing in double digits, grew at just 6% in 2018. India’s GDP growth in 2018-19 (in constant rupees) was 6.8%, the lowest since 2014-15. Most institutional and private forecasts, including that of the RBI, see the Indian economy growing at 5%, or perhaps even less in 2019-20. 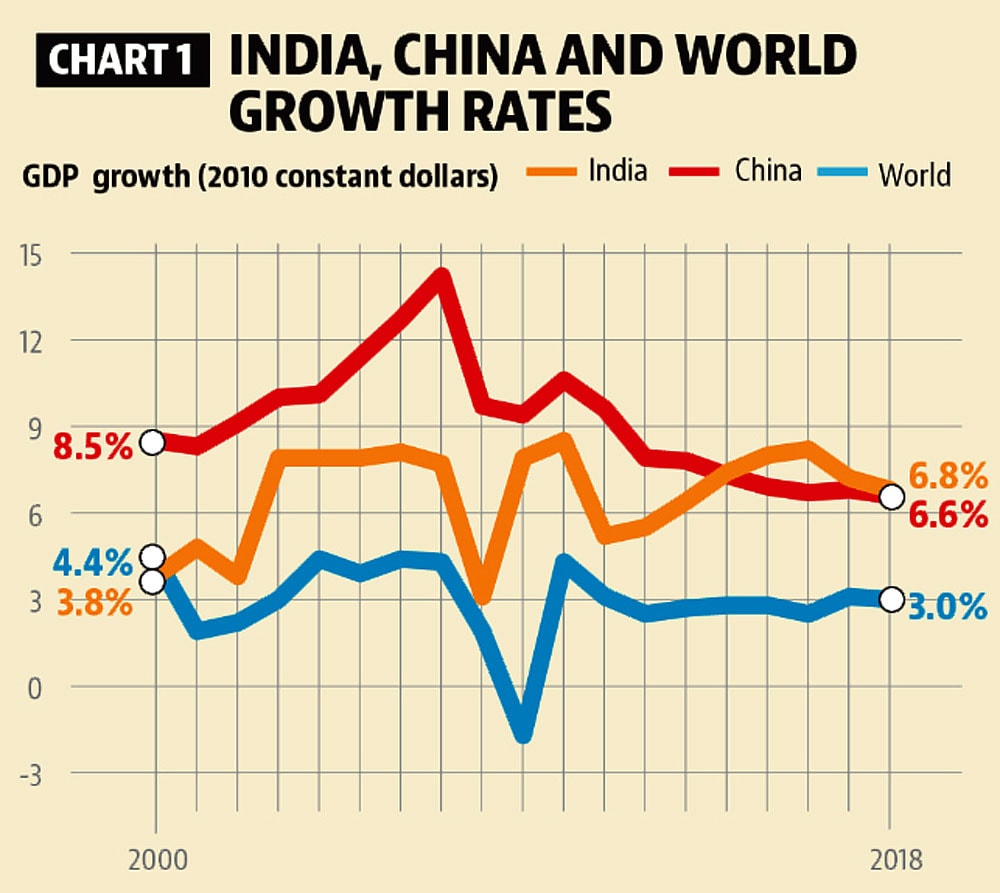 Even the government seems to have moderated its growth expectations for the Indian economy. This year’s Economic Survey, for example, says that India needs to sustain a real GDP growth rate of 8% in order to become a $5 trillion economy by 2024-25.

These stylised facts about the last decade raise a fundamental question about the Indian economy. Should India reconcile itself to the fact that it can never achieve the kind of economic growth it aspired for less than a decade ago? Answering this question requires a holistic assessment of how things have changed both within and outside the Indian economy.

To be sure, the recent deceleration in GDP growth is not unprecedented in India. If the Indian economy ends up with a 5% growth in 2019-20, it will be similar to how it performed in the beginning of the decade. GDP growth was 5.2% and 5.5% in 2011-12 and 2012-13. However, there is a significant difference in the low growth phase at the beginning of the decade and the one we are facing today. This difference is inflation. The low growth phase during the beginning of the current decade was accompanied by double digit inflation. Notwithstanding the recent spike, inflation rates today are less than half of what they were eight-nine years ago. The difference is even starker if one looks at core inflation i.e. inflation without food and fuel. This also means that the basic constraint facing the economy has moved from a supply side one to a demand side one. The main reason for high inflation in an economy is its inability to meet the demand for goods and services being used for economic activity. The reverse holds true when inflation starts declining, when economic agents; both consumers and producers (who also buy raw materials, etc) are not buying enough to clear the supply in the market. Core inflation trends are a better metric of the supply versus demand side constraint in an economy as it is immune from seasonal shocks to agricultural production, such as the current onion price spike due to crop destruction, and exogenous shocks such as crude oil prices.

How did India end up with a demand side problem to growth within less than a decade of supply side bottlenecks bringing down growth and pushing up inflation? This is the most important economic story that has played out in the last decade.

Three factors have played a major role in this.

Export markets are not growing as fast as they used to. Annual export growth in dollar terms in the last decade was mostly above the 20% mark, it has more than halved for most parts of the present decade. This has almost killed an important growth engine for the Indian economy. 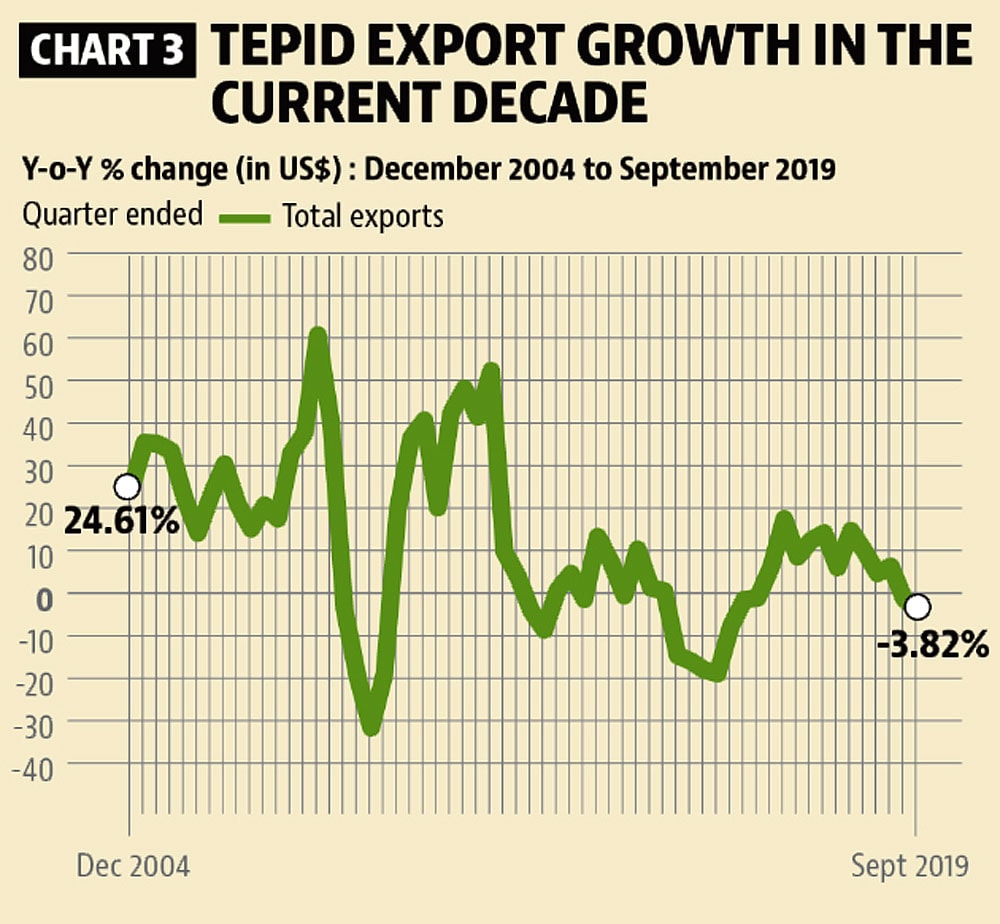 Many entrepreneurs had overleveraged themselves in the hope that the pre-crisis boom would last forever. When the crisis punctured these hopes, these borrowers and their lenders; primarily banks, had a huge crisis on their hands, which created a vicious cycle of sorts. Already saddled with debt, the entrepreneurs could not borrow to invest more, and with their capital locked up in bad debt, the banks found it difficult to lend to even worthy borrowers. This is also referred to as the Twin Balance Sheet crisis in the Indian economy. While the primary trigger for the crisis was ‘irrational exuberance’, poor governance structures in banks, which created incentives for unscrupulous financial practices, also compounded this problem.

At a time when these headwinds were being generated in the Indian economy, political economy took a significant turn in India. In 2014, the Congress-led United Progressive Alliance (UPA) government lost power to the Bharatiya Janata Party (BJP). The latter had exploited high inflation (as discussed above) and allegations of corruption against the UPA government to the hilt in its election campaign. So it was only natural that these two issues were crucial in driving its policy agenda. The BJP-led government adopted inflation targeting as the guiding principle of monetary policy and was particularly keen to control food prices, as can be seen by meagre increases in Minimum Support Prices for large part of the first Narendra Modi government.

In 2016, the government announced demonetisation to purge unaccounted income stored in cash. While almost all of the money came back to the financial system, the policy inflicted a massive disruption to economic activity, especially in the cash-dependent informal economy. Even as the economy was recovering from this shock, the government rolled out the Goods and Services Tax (GST) in July 2017, which significantly increased the cost of doing business for informal and small businesses. As of now, the GST does not seem to have delivered on its promise of augmenting tax revenues. The Centre’s GST collections missed their target by Rs 1 lakh crore in 2018-19.

Both these policies, however, dealt a big blow to the economy, which was slowly recovering from its supply side troubles which emerged earlier in the decade. This is best captured by the RBI’s Consumer Confidence Surveys (CCS), which are conducted in 13 major cities in the country. The CCS shows that net perception on general economic situation and employment have gone downhill in the post-demonetisation phase. This eventually has also brought down demand, which can be seen from the decline in non-essential spending metric in the CCS. For India to make a recovery, the first pre-requisite is a policy realisation that reviving domestic aggregate demand in the economy is a bigger short-term challenge than controlling inflation or adhering to fiscal targets. Unless this happens, the ghosts of past stagflation and potential political gains from being perceived as tough on corruption would continue to drive policy in a direction where the Indian economy might be stuck with a recessionary environment