The biggest reason for this is the employment-income mismatch in agriculture. While the share of agriculture in India’s GDP has been coming down, its share of employment has been relatively constant.

Everybody agrees that employment generation is India’s biggest political-economy challenge. It is likely to be one of the main issues in the 2019 parliamentary elections. But not many understand the nuances involved. India’s job problem is not that people do not have jobs. It is about lack of well-paying jobs.

Agriculture still employs more than 40% of India’s workforce. For industry and services, the relative share of income has been greater than one in this period (See chart below). The annual employment share numbers used in these calculations are based on International Labour Organisation’s estimations. The biggest takeaway from these figures is that even after 25 years, economic reforms have not been able to address the biggest structural inequality in India’s job-market. 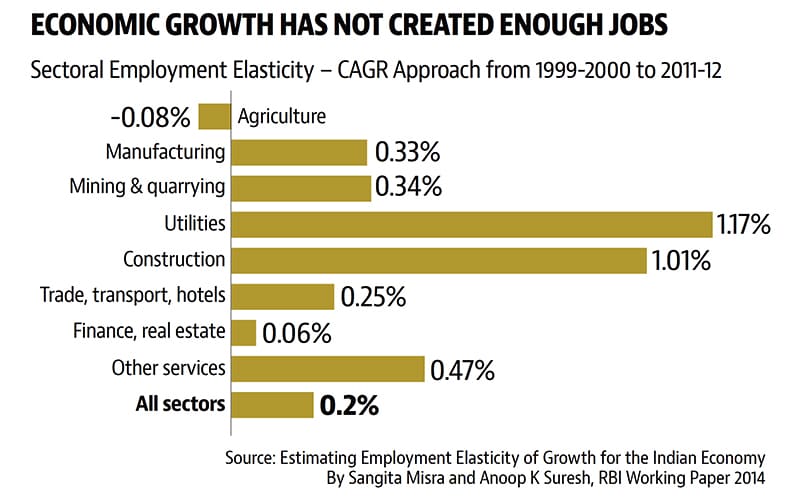 A 2014 Reserve Bank of India (RBI) working paper gave sector-wise estimates of employment elasticity for the Indian economy between 1999-00 and 2011-12. The overall employment elasticity for the Indian economy during this period was 0.2. This means that rate of growth of increase in employment was one-fifth the rate at which GDP increased during this period. The term jobless growth in the great Indian employment debate has its origins in these statistics.

To be sure, there are significant sector-wise divergences in employment elasticity during this period (See chart below). The value is negative for agriculture, which signifies a welcome shift of workers away from agriculture without compromising agricultural growth. The only sectors where the value is greater than one are construction and utilities. Given the fact that construction sector has seen the biggest growth in employment in this period, this should be a welcome trend. However, statistics from the KLEM (Capital with a K, Labour, Energy, Material) database released by the RBI earlier this year shows a disturbing trend on this count. Construction has been experiencing a fall in value added per worker and is headed towards convergence with the corresponding values in agriculture. 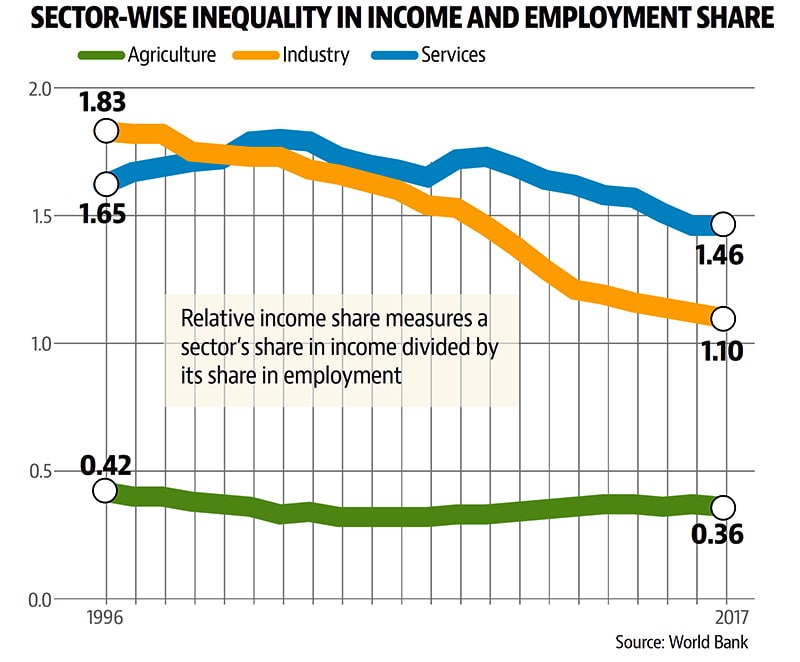 This author had argued in an earlier piece that such a development can weaken the ability of the construction sector to gainfully employ the agricultural workforce. This can worsen the sector-wise relative income inequality which has been discussed above.

With construction reaching its limits to accommodate the agricultural workforce, what are the other options? There are no easy answers to this question. In fact, some of the commonly peddled answers are not useful. Three of these are worth highlighting here.

Self-employment is often cited as the solution to India’s job-shortage. Ironical as it may sound, self-employment is actually a part of the problem. According to the latest economic census, which was conducted between January 2013 and April 2014, the average jobs created by an economic establishment in India was just 2.2. Only 30% of these economic establishments employed six or more people. While these figures should not be used to negate the presence of a large (in absolute terms) formal sector workforce, they capture the dominance of informal sector low income petty production employment in the Indian economy. Statistics from International Labour Organisation’s recently released India Wage Report give a useful context to these figures. Only 74 million out of the 402 million workers in India had regular/salaried jobs in 2011-12. 206 million were self-employed, and 121 million were wage labourers dependent on casual work.

While much of India’s low-paying job problems can be attributed to lack of enough well-paying jobs, we are also slowly but steadily heading towards a situation where lack of qualified workers for well-paying jobs is emerging as an important constraint.

Industry-surveys lamenting the poor employability of India’s engineering graduates are common knowledge now. Technological innovations in the field of artificial intelligence and increasing automation are likely to eat into existing relatively low-skilled formal sector jobs. We will need to significantly enhance the skill-set of our workforce to be able to maintain even the current pace of job-creation in the days to come. While headline numbers on educational enrolment show improvement, statistics on even elementary learning outcomes are extremely disappointing. According to the latest Annual Status of Education Report (ASER) learning outcome surveys conducted by not-for-profit Pratham, less than half of class VIII students could do a simple division in 2016. These statistics underline the misplaced optimism around hopes of India exploiting the knowledge economy route to overcome its employment challenge. And last but not the least is the issue relating to the job-creating abilities of the public sector. Economic reforms have often been associated with a decline in public sector employment in the Indian economy. While this could be true in the case of public sector jobs in core-economic activities, it need not be the case in activities which deal with provision of public goods.

India has a huge deficit in terms of public provision of social facilities such as health and education. Even in areas such as policing and administering of justice, which are unlikely to be outsourced to the private sector, we lag many countries. For example, India had just 135 police personnel per lakh people in 2013 (latest year for which data is available) according to statistics from the United Nations Office on Drugs and Crime. These figures were much higher for advanced countries (United Kingdom: 318) and even emerging market peers such as Brazil (262). Few will disagree that our police force is understaffed.

A significant expansion of employment in these sectors can easily be undertaken with an increase in government spending on wages and training. While bulk of this money has to come from additional revenue receipts, it is worth asking whether there is a case for restructuring of government expenditure to increase its employment creation potential. For example, the state-owned airline Air India loses more than ?5000 crore every year. Were this public money to be used for running primary health centres or polytechnic institutes, how many more present/future jobs could have been created? This is not to argue for wholesale disinvestment of public sector units, but there is definitely a case for prioritising government spending so that it is spent on sustainable and egalitarian job-creation.

This is the first in a five-part series on India’s employment challenge. The next part will examine whether the Indian economy added 12.8 million jobs in 2017.