Did the Indian economy create nearly 13 million jobs in 2017?

While a final conclusion on employment growth should wait for 2017-18 NSSO data, rosy estimates based on selective assumptions do not inspire much confidence .

In a study prepared as a background report for the Prime Minister’s Economic Advisory Council, economists Surjit Bhalla and Tirthatanmoy Das have claimed that the Indian economy created around 12.8 million jobs (by principal status) in 2017. The authors also claim that net job creation between 2013 and 2017 in India was 22.1 million, which is much better than the creation of 11 million jobs between 2004-05 and 2011-12. This suggests the present government has done a better job on the employment front than its predecessor.

These findings are in sharp contrast to statistics from private sources such as the Centre for Monitoring Indian Economy (CMIE), which shows the increase in employment between 2016 and 2017 to be just 1.4 million. Given the centrality of the job-debate in the run-up to the 2019 general elections, such a divergence in employment estimates is intriguing.

To be sure, neither of these estimates will be considered as the final word in the great Indian employment debate. All credible employment related studies in India rely on employment-unemployment surveys (EUS) conducted by the National Sample Survey Office (NSSO). Since the latest available survey was conducted in 2011-12, there is no reliable way to evaluate job-creation under the present government. Bhalla and Das themselves admit that they “now anxiously wait for the confirmation (or rejection) of our estimates from the NSSO survey for 2017-18”. This caveat notwithstanding, we believe that their conclusion is based on the selective use of data and unjustified assumptions. 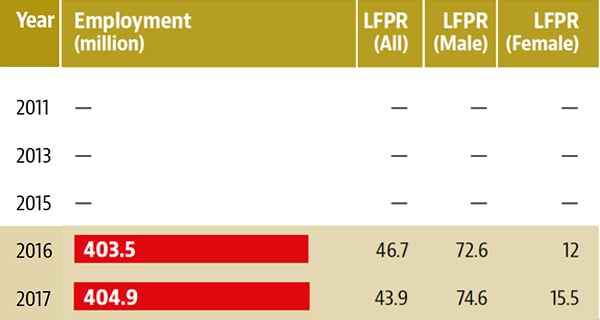 Since there is not much debate on population estimates thanks to census trends, employment estimates depend more on what the LFPR and UR ratios are at a given point of time.

Although the NSSO estimates of LFPR and UR are available only till 2011-12, annual employment-unemployment surveys conducted by the Labour Bureau give LFPR and UR ratios till 2015. These surveys are not as informative or authoritative as the NSSO surveys, but do provide basic labour statistics.

How did Bhalla and Das arrive at the LFPR figures? They do this by assuming the rate of change in LFPR between 2014 and 2016 to be the same as what it was between 2013 and 2014. For 2016 and 2017, LFPR values are assumed to be constant. Interestingly, Bhalla and Das selectively use the CMIE data to justify their method. They cite a decline in CMIE’s UR as a proof of improvement in economic conditions but refuse to engage with the declining LFPR in the same database.

To be sure, CMIE’s LFPR for women is much lower than the figures reported by previous NSSO and Labour Bureau surveys. However, this does not imply that the LFPR values used by Bhalla and Das for 2016 and 2017 are necessarily accurate. Assuming an unchanging LFPR during a period that has seen policy measures such as demonetisation and GST is problematic. Even if the approximation of the LFPR is wrong by as little as two percentage points, this can translate into differences in estimated employment of as high as 20 million.

Unlike the LFPR, the actual UR used for calculations is not even discussed by Bhalla and Das. Based on their reported workforce for 2017 (464.3 million) and the estimated labour force of 482.6 million for the same year, the implied unemployment rate comes to 3.8%. This is much lower than 4.5% that CMIE survey finds.

Bhalla and Das try to bolster their main conclusion by offering supporting evidence for employment creation in two different ways. First, by bringing in data from other sources such as the Labour Bureau’s Quarterly Employment Survey (QES) and the Employee Provident Fund Organisation (EPFO) and second by pointing to job generation potential of various government schemes.

The estimation of new jobs in EPFO data is tricky and has been discussed widely following the study earlier this year by Pulak Ghosh and Soumya Kanti Ghosh which estimated that 7 million jobs were added during 2017. The method employed by this study as well as the appropriateness of using this type of data to estimate job creation have been widely criticized. Bhalla and Das try to improve on the analysis by calculating the number of new provident fund accounts opened for workers aged 18-21 years.

The authors assume that 80% of workers in this age bracket are first-time workers. Again this assumption is not justified. They arrive at a figure of 1.8 million new jobs in this sector, in this age group. If true, this is certainly good news for these particular workers. But since we do not know how many jobs were created or destroyed in the rest of the economy, this number does not help us much in gauging the overall employment climate. Unlike nationally representative household surveys, or even enterprise surveys, this method does not give us net new jobs created.

As for the QES data, the authors themselves note this survey covers only around 20 million workers and is not a valid indicator of employment for the entire economy. But, having noted this they go on to assume that the rate of job creation in this data (2.85% in 2017) can be applied to the entire non-farm workforce of 350 million giving an increase in employment of 10 million. This is a completely unfounded assumption and the authors make no attempt to justify it. As for various government schemes, the authors’ efforts are far from rigorous. For example, when discussing the MUDRA loan scheme , the authors assert that an INR 10 lakh loan can be assumed to create half a job and hence the 8 million newly disbursed loans in 2017-18 must have created 4 million jobs. Similarly, an increase in construction activity is taken as a proxy for increased employment in this sector. While all of this may be true, it also may not. The short point is, none of these arguments can give concrete evidence vis-à-vis employment generation or the lack of it in the economy.

The study also offers a new definition of LFPR by asserting that those who are enrolled in school or college should also be considered a part of the labour force. But it is not clear what is achieved by such a redefinition. Perhaps the authors wish to say that recently observed reductions in the LFPR should serve as a warning sign that those who are withdrawing from the labour force now to attend educational institutions, will soon be added to the pool of those looking for jobs. But they do not say it explicitly. One point on which Bhalla and Das are in line with the emerging scholarship on the Indian labour market is that the decline in the rate of growth of population is reducing the number of young people being added to the labour force each year. This reduces the pressure to create new jobs. But in this regard, we should remember that India still has a structural transition to complete. Thus providing jobs only for new entrants is not the challenge on the employment front. Jobs need to be created to meet the needs of those leaving agriculture, whose number is likely to be as large as, or larger than the new entrants. This is missing from their analysis.

While the authors do make some technical contributions such as developing a comparable definition of employment between NSS, LB, and CMIE, this does not absolve them of the fact that their main conclusion of strong employment growth in 2017, relies on cherry-picking of numbers or questionable assumptions.

It should be pointed out that a strong job growth scenario seems unlikely given continued low GDP growth, weakness in investment, and effects of shocks such as GST and demonetisation. But we, alongside the authors, await the new results from the next EUS by the NSSO for a resolution of the matter.