At least 10 have been reported dead, eight injured and over two dozen are feared trapped in rubble after a 100-year-old building in Mumbai’s Dongri area collapsed on Tuesday. The collapse was reported at 11:40 am in the morning and the officials have said that nearly 40-50 people are feared to be trapped. Three teams of National Disaster Response Force (NDRF) and fire tenders were rushed to the spot to carry out the rescue operations which are underway.Confirming that the building is 100 years old, Chief Minister of Maharashtra Devendra Fadnavis said that the state government has ordered an investigation into the building collapse.Follow highlights here:

Search operations likely to continue over the night

The rescue operation is still underway. Firemen on the spot have said that search operation is likely to continue through the night as they have been clearing the debris manually as a JCB machine cannot enter the spot due to narrow lanes.

BMC disaster management cell has confirmed that at least 10 people have died today after a 100-year-old building came crumbling down in Mumbai’s Dongri. The count of injured people is at eight. The search operations are currently underway.

The death toll in a building collapse in Mumbai’s Dongri reached four, while nine have been reported injured. This is a second such collapse around Mumbai in less than ten days.

Condoling the loss of lives, Congress general secretary Priyanka Gandhi Vadra said, “I pray for the well-being of the people trapped inside the collapsed four-storey building. My condolences are with the families. Congress workers are requested to help in the rescue operation. This is the third incident which has recently happened. Why was the action not taken on time?” she said.

The death toll in a building collapse in Mumbai’s Dongri reached four, while nine have been reported injured. This is a second such collapse around Mumbai in less than ten days.

Collapse of building in Mumbai’s Dongri is anguishing: PM Modi

Prime Minister Narendra Modi tweeted on the Mumbai building collapse incident and said, “Collapse of a building in Mumbai’s Dongri is anguishing. My condolences to the families of those who lost their lives. I hope the injured recover soon. Maharashtra Government, NDRF and local authorities are working on rescue operations and assisting those in need.”

Collapse of a building in Mumbai’s Dongri is anguishing. My condolences to the families of those who lost their lives. I hope the injured recover soon. Maharashtra Government, NDRF and local authorities are working on rescue operations & assisting those in need: PM @narendramodi

The Dongri building collapse is really unfortunate. I have been in touch with Mayor & MC, relief work is on. Prayers for people trapped in the debris. I sincerely request residents of the building tht are declared dilapidated by @mybmc to please evacuate, not risk their lives.

The death toll in a building collapse in Mumbai’s Dongri reached three, while nine have been reported injured. This is a second such collapse around Mumbai in less than ten days. While ten people have been admitted in JJ Hospital, one child has been discharged from Habib hospital.

The search rescure operations are underway.

Milind Deora and Bhai Jagtap arrive at the spot

Congress leader Milind Deora who arrived at the spot where four-storey residential building collapsed in congested Dongri area on Tuesday afternoon said, “This year the CM did not take the review meeting which takes places every year before monsoon for dilapidated buildings. We urge the CM to conduct this meeting. Simply suspending 2-3 officers will not do.”

Confusion prevails over ownership of collapsed building in Mumbai

While Congress legislator Bhai Jagtap has alleged that residents had been complaining to MHADA (Maharashtra Housing and Area Development Authority) to take prompt measures as the building was very old and in a dilapidated state, a top MHADA office-bearer denied that the building belonged to the authority: PTI

Compensation to be announced after cause is known: Devendra Fadnavis

This was an illegal building: Radha Krishna Vikhepatil

Minister of Housing of Maharashtra, Radha Krishna Vikhepatil, said “The situation is very grave. Our efforts are concentrated towards saving maximum lives. This was an illegal building. We are looking into all aspects of the illegality, and who is to b held responsible. The nearby buildings have been vacated.”

Best of medical care is being given to all victims: Girish Mahajan

Maharashtra Water Resources Minister, Girish Mahajan, said, “There are a lot of challenges in the rescue operations, such as narrow lanes, no place for machinery to enter and evacuate debris. The locals are helping a lot by carrying injured to ambulances or evacuating debris. This is a 100 year old building. A notice was sent to the building in 2017, as it was found delapidated. BMC has more details and will be given out shortly. The best of medical care is being given to all victims.”

Mumbai Police Commissioner Sanjay Barve and DCP, Zone 1, Abhishek Trimukhe arrived at the site where a building collapsed in Dongri, today. 2 people have died and 6 people have been injured in the incident ,so far.

Maharashtra: Mumbai Police Commissioner Sanjay Barve and DCP, Zone 1, Abhishek Trimukhe arrive at the site where a building collapsed in Dongri, today. 2 people have died & 6 people have been injured in the incident ,so far. pic.twitter.com/bOKpzC5wwE

Ashwini Joshi, Additional Municipal Commissioner, said, “The BMC had informed MHADA about the building. MHADA then issued a notice in 2017. It’s a cess building. A structural audit was carried out in 2017 and the building was declared as C1 (extremely dangerous).”

‘They were asked to vacate their building’: Locals recall

Abdul Gaffar shaikh (spectacled man in white kurta) lives in nearby Kasai building, adjoining to the building that collapsed. They were asked to vacate their building. Their building experienced vibrations when the other building collapsed. 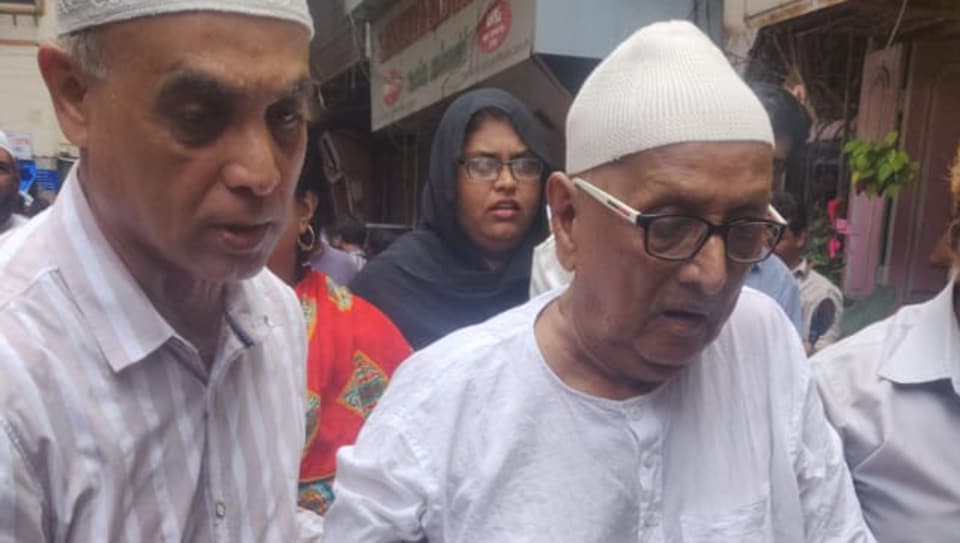 Senior officer of Fire Brigade: If I could take a JCB inside, by now all debris would be cleared

A senior officer of the Mumbai Fire Brigade said, “Access is a very big challenge for us at this time. The lanes are narrow, so we cannot take any machinery inside. We are manually doing all work, clearing debris, cutting iron girders. Since these are Lal old buildings that were renovated at some point, they have been supported with iron rods around the structure of the building. This is proving rescue challenging, and is very problematic for those stuck in the debris. If I could take a JCB inside, by now all debris would be cleared.”

The G+4 building ‘Kesarbai’ situated near Tandel street, behind Abdul Hamid Shah Dargah, Dongri collapsed approximately around 11:40 am today. Relatives of those affected are seen waiting outside the JJ hospital, Mumbai. 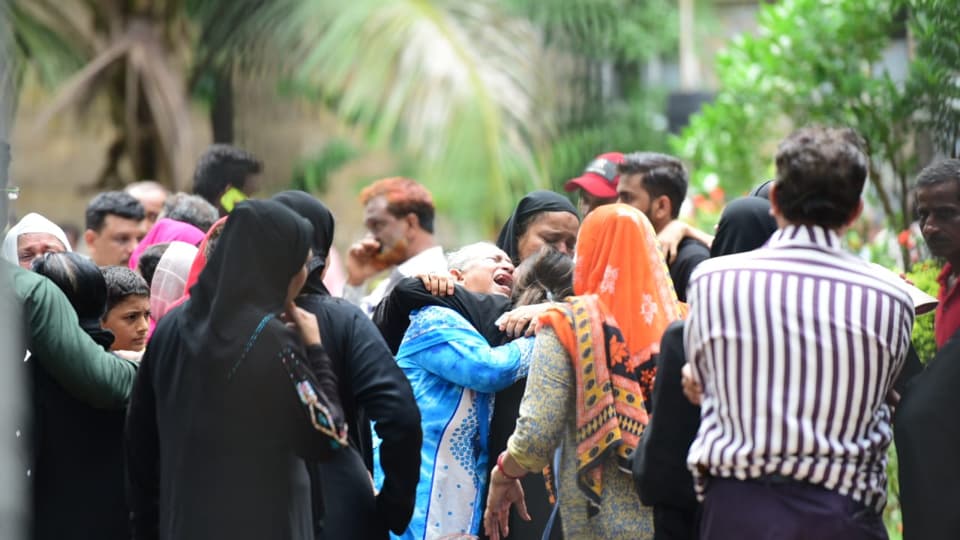 MBRRB Chairman Vinod Ghosalkar: Will investigate why the redevelopment work was not initiated

“This is a serious matter and we will investigate why the redevelopment work was not initiated, what caused the delays and take appropriate action against those responsible,” Ghosalkar told IANS.

Investigation will be done: Devendra Fadnavis

Maharashtra CM Devendra Fadnavis on Dongri building collapse: The entire focus is on rescuing the people trapped. Investigation will be done.

Maharashtra CM Devendra Fadnavis on Dongri building collapse: As per the initial information I have received, around 15 families are feared trapped in the collapse. The building is around 100 yrs old. The entire focus is on rescuing the people trapped. Investigation will be done. pic.twitter.com/ApIVqmNLMb

Child rescued has been admitted to hospital and is stable

A child rescued from the building collapse site in Dongri, he has been admitted to hospital and is stable, reports news agency ANI.

Mumbai: A child rescued from the building collapse site in Dongri, he has been admitted to hospital and is stable pic.twitter.com/LawktNSdR7

It was not in the list of dangerous buildings: Devendra Fadnavis:

It was a 100 year old building. It was not in the list of dangerous buildings. Developer was appointed for redevelopment. We will probe if there was any lapse on part of developer.

Will take action against those responsible for lapses: MHADA

The Maharashtra Housing and Area Development Authority (MHADA), which had given the building that collapsed in Mumbai on Tuesday to a private builder for re-development, said action would be taken against those responsible for any lacunae.

MHADA Chairman Uday Samant said the building, located in Dongri area, was under their jurisdiction but given to a private builder for re-development: PTI

Fire brigade, Mumbai Police and civic officials rushed to the site but the constricted lanes made it difficult to access the area, reduced to a mass of rubble, twisted concrete and broken wires.

Scores of locals joined in the effort, forming a human chain to help in removing the debris brick by brick and picking up slabs of concrete to locate those buried.

Ambulances could not reach the site and had to be parked around 50 metres away: PTI

Legislator Bhai Jagtap: Residents had been complaining to MHADA for a long time

Legislator Bhai Jagtap said residents had been complaining to MHADA to take prompt measures as the building was very old and in a dilapidated state for a long time.

The ‘Kesarbai’ building, located in a bustling narrow lane in Tandel Street of Dongri area of south Mumbai, crashed around 11.40 am, a BMC disaster management cell official said: PTI

Sniffer dogs have been brought to the spot by National Disaster Response Force (NDRF) team.

An eyewitness said the building collapse felt like a quake. The building was owned by the Maharashtra Housing and Area Development Authority (MHADA) and its officials reached the site to assess the situation. Two teams of the National Disaster Response Force were also deployed to help rescue those trapped, reports news agency PTI.

Close to 14-15 families trapped under debris

The building, Kesarbai, which is a ground plus four-storey building situated in Dongri area in Mumbai, collapsed at around 11:30 am on Tuesday. According to news reports, close to 14-15 families are believed to be trapped under the debris.

Ten ambulances on the spot in Dongri

Rescue operation continues as more people are feared trapped. At present, there are ten ambulances on spot, informed the BMC disaster management cell.

As a caution, Mumbai traffic police have created a green corridor at JJ hospital in Mumbai central for movement of ambulances.

During the rescue operation, the BMC disaster managed rescued three people from the spot, including a child. In the incident, two people lost their lives.

Rescue operation underway at the site where G+4 building collapsed

Police and civic body staff are present at the site. The adjoining buildings,which are in a dilapidated condition, have been vacated by the Mumbai fire brigade.

A four-storey building collapsed in Mumbai’s Dongri area on Tuesday. At least 40 to 50 people are feared to be trapped, the officials said. Locals reported the incident at 11:40 am as fire tenders and a team of National Disaster Response Force (NDRF) were rushed to Tandel street in Abdul Hamid Durga area.