ADVERTISEMENT
Home / India News / Narendra Modi’s speech in Parliament: Reading between the lines and beyond the numbers

Narendra Modi’s speech in Parliament: Reading between the lines and beyond the numbers

Statistics suggest that the growing negativity vis-à-vis the Narendra Modi government might be a bottom-up phenomenon rather than a top-down creation by a few opposition leaders.

These statistics form the core of Modi’s counter-attack against the opposition. While the present government is trying to improve economic dynamism by enhancing infrastructure and welfare spending and bringing in a better regulatory framework, the opposition is trying to create an atmosphere of despair, Modi argued. It is therefore appropriate that an analysis examines three sub-categories of this larger narrative rather than each and every statistic given in the speech.

Modi’s claims of achieving much bigger targets in road/rail construction etc. point towards greater capital spending by his government. As the name suggests, capital spending refers to expenditure on activities which lead to creation of assets. Such assets have the potential of helping economic growth in future as well. Spending in infrastructure related products can also create incentives for private investment.

Statistics from Centre for Monitoring Indian Economy’s (CMIE) capex database suggests that the present government has not been able to sustain its initial investment push. Annual growth in new project announcements and projects completed (in value terms) by the public sector did show a recovery in the first two years of Modi government, but it has been going down since then (See Chart 1). To be sure, public sector would include both central and state governments. However, given the fact that the BJP has come in power in more and more states after the 2014 elections, a large part of state government spending can also be attributed to the party. It needs to be kept in mind that annual growth in gross fixed capital formation (GFCF) went down for five consecutive quarters from December 2015 to March 2017 (See Chart 2). The share of private sector in capital formation is much bigger than the government. Tracking overall investment activity is therefore a much better indicator of how effective a government’s economic management is. There has been some revival in GFCF in the first half of this fiscal year. A sustained recovery on this front would have to deal with emerging headwinds from increasing interest rates and rising inflation. Had the cycle turned earlier, it would have benefitted from a more favourable environment. Successive disruptions from demonetisation and teething issues in implementation of Goods and Services Tax are a big reason for the delay in this recovery. Even chief economic advisor Arvind Subramanian admitted that these two policy decisions led to India losing out from exploiting the gains of global economic recovery.

To be fair, not all of the blame for sluggish investment lies with this government. The problem of accumulated bad loans has been a major obstacle in revival of private investment in India. Banks do not have enough funds to lend and companies who have not repaid these loans are not in a position to borrow money. Modi rightly pointed out in his speech that the bad loan crisis is a legacy issue for his government. What is not right is his attempt to put the entire blame for this crisis on corruption under the previous government.

A lot of bad loans were a result of over-optimistic lending and borrowing decisions by banks and borrowers. These were based on expectations of economic boom during United Progressive Alliance government lasting forever. With the onset of the global economic crisis in 2008, these expectations ran aground.

Former RBI governor Raghuram Rajan had criticised the tendency to see the entire bad loan crisis as a result of corruption in a 2016 speech given in Bengaluru. The speech says, “I am not saying that there was no malfeasance..I am saying that, typically, there were factors other than malfeasance at play, and a number of genuine committed entrepreneurs are in trouble, as are banks that made reasonable business decisions given what they knew then.”

Also, it was the RBI, not the government (which Modi suggested in this speech) which initiated Asset Quality Review in 2015 and forced the banks to transparently declare much higher levels of bad debts than they had been doing earlier. The share of non-performing assets in total advances of banks shows a big rise after this process was started (See Chart 3). 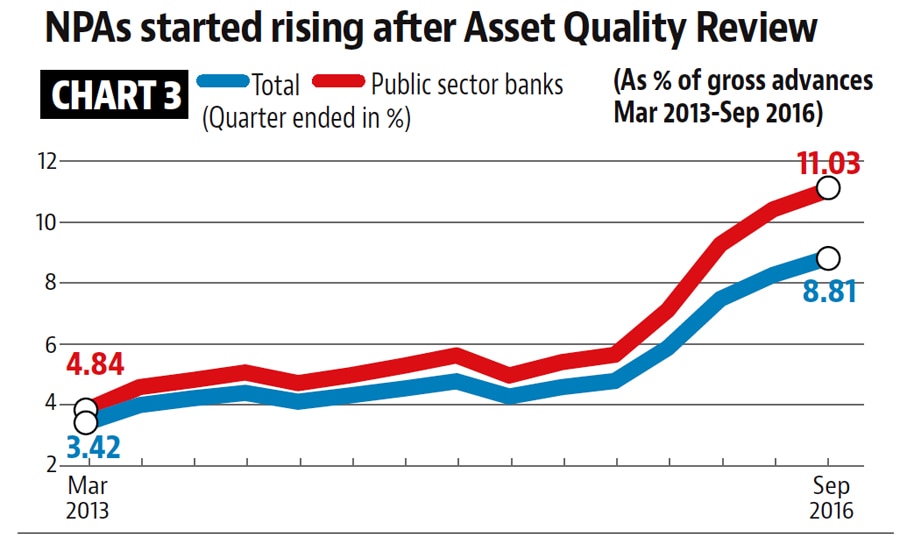 There is no denying the fact that the present government has successfully implemented schemes which promote welfare and better inclusion. Jan Dhan Yojna has helped in near universalisation of access to banking services. Ujjwala Yojna has given cheap cooking gas connections for millions of poor households in the country. However it is also true that these schemes cannot ensure a permanent stream of income to their beneficiaries. In other words, there is no substitute for rapid employment growth when it comes to delivering on the employment front.

It is no surprise that the biggest debate on this government’s economic performance is focused on employment generation. Lack of credible employment data has also contributed to muddying of waters on the issue. National Sample Survey Office figures on employment, which is the main source of job data in India, will not be available until 2019. It is naïve to assume that politics over jobs would wait for such figures. The government seems to be losing the public debate on the issue as of now. Consumer confidence surveys conducted by the RBI show that more and more people have been getting pessimistic about their present and future employment prospects in the recent period (See chart 4). Things were looking up before the government announced demonetisation. These statistics are supported by findings of other surveys as well. Mood of the Nation survey conducted by the CSDS-Lokniti suggests that employment has gained in importance as a political issue for voters. The share of people who believe that the promise of Acche Din has not materialised under Narendra Modi’s government has almost doubled between May 2017 and January 2018, the survey showed.

These statistics suggest that the growing negativity vis-à-vis the government might be a bottom-up phenomenon rather than a top-down creation by a few opposition leaders.