The Union government has said that these 20 million doses will be sent to states based on how many people they have in the 18-44 age group in order to ensure doses are distributed in an equitable manner, but some states have complained that their allocation is inadequate.
READ FULL STORY
By HT Correspondent, Hindustan Times, New Delhi

State governments across India will altogether be given 20 million doses to inoculate their 18-44 age group population from the roughly 85 million vaccines doses expected to be produced this month, according to a formula shared by the Union government with the Supreme Court, in which the Centre said it has fixed quotas even for doses that states need to directly procure from vaccine makers.

The Union government has said that these 20 million doses will be sent to states based on how many people they have in the 18-44 age group in order to ensure doses are distributed in an equitable manner, but some states have complained that their allocation is inadequate. 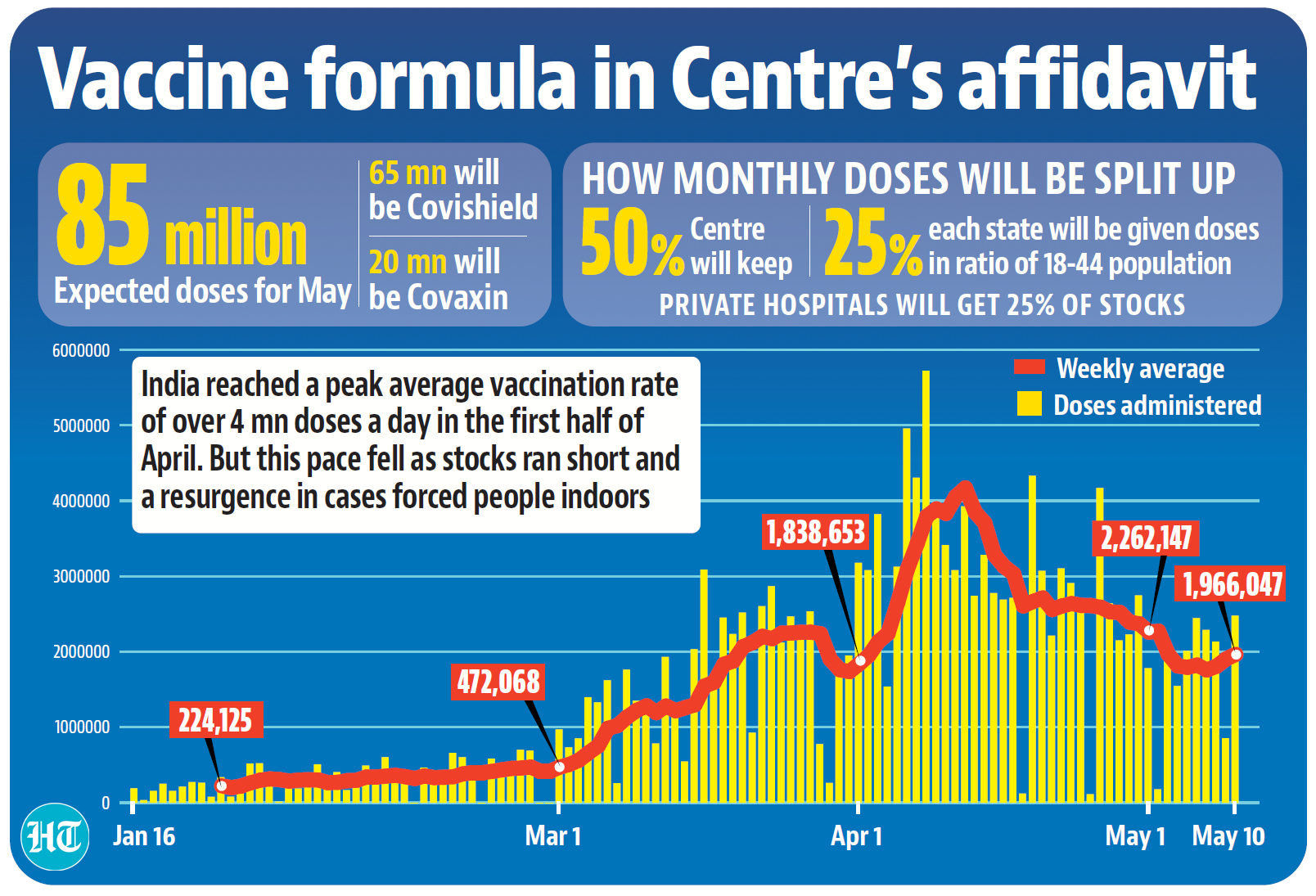 “It is submitted that though the states are procuring vaccines from the manufacturers, the central government has, in consultation with the vaccine manufacturers, determined the pro-rata population of each state in the age group of 18-44 (years) and each state will procure only that quantity so that there is no disparity in availability of vaccines between the states inter-se, either based upon difference in their bargaining power or otherwise,” said the Centre’s response to the Supreme Court filed over the weekend.

The affidavit listed the allocation for the month of May, and added that this supply pertained only to the doses states were directly procuring, with a separate formula is in place for how the Centre distributes the doses it acquires from the vaccine makers.

India’s coronavirus vaccination drive follows two tracks: the Union government offers free doses meant for those 45 years of age and above; then there is the acquisition by state governments and private hospitals to give doses for any group they choose to cater to.

The Union government has made it mandatory for vaccine makers in India – at present, the two shots being used widely are both made in India – to keep 50% of their doses for the central supply, while the remaining will be evenly split between private procurers and state governments.

The 20 million doses allocated this month for direct acquisition by state governments are the only ones to be offered for free for those under the age of 45. The rest, ostensibly another 20 million, will be shots that will be paid for. India has roughly 595 million people between the ages of 18 and 44, according to the government’s Technical Group of Population Projections.

Out of the 50% quota allotted to each state, the division is made evenly. In other words, from out of the 50% allotted to the state, half will go to the state’s public channel [calculated on pro-rata basis based upon the population of age group of 18-44 years] and the balance will go to the private sector based upon the contracts between private sector and vaccine manufacturers, according to the Centre’s affidavit, which was in compliance with a Supreme Court order to spell out the vaccination policy.

“In vaccinating the 18-44 category, the central government’s role is to ensure equitable vaccine distribution among states; it should not be the case that a bulk of doses reaches only a particular state, and another one that needs more is left waiting. Since all states need vaccines, we have to see to it that all states get it, and to ensure that the Centre regularly discusses with states and advises accordingly,” said Lav Agarwal, joint secretary, Union health ministry. Agarwal did not clarify how the pro-rata population estimate was calculated.

The Union government’s affidavit said that it expects vaccine production to go up in the next couple of months, with Bharat Biotech producing up to 55 million doses by July and Sputnik V’s manufacturers contributing 12 million by the same month. While the government did not give a figure for the scale-up in Covishield’s production by SII, the company’s CEO said during media interviews that the monthly capacity was set to go up to 100 million by July.

In recent days, several states have raised concerns over the shortage of vaccines. Maharashtra health minister Rajesh Tope said on Tuesday the state will need to suspend the drive for those under the age of 45 and divert some of the doses from this category for the older age groups in order to meet the second dose demand.

Watch | Covid update: WHO classifies ‘variant of concern’; Delhi runs out of Covaxin?﻿

In Delhi, Aam Aadmi Party MLA Atishi said 125 centres where Covaxin was being given to the under-45 age group will be shut since the city has run out of doses. Later, at a press conference, Delhi’s deputy chief minister Manish Sisodia accused the Centre of creating a shortage and “forcing” state governments to invite global tenders.

At least nine states have said they will float global tenders for Covid-19 vaccines.

According to data compiled by science analytics company Airfinity, several vaccine makers have already committed supplies equalling or exceeding their projected production for the year. Among the prominent vaccine makers that still have capacity are Pfizer-BioNTech (800 million doses), Novavax (300 million doses) and Gamaleya Institute (1.43 billion doses).

Moderna, Johnson & Johnson and AstraZeneca appear to have already done deals for more than what they are expected to produce through the year.

Union health ministry officials said the focus of the vaccination drive from its perspective remained on the over-45 group since they were most vulnerable to Covid-19. States have been urged to “ensure all beneficiaries who have taken the first dose are prioritised for the second doses”, the ministry said on Tuesday following a meeting with states.

At an aggregate level, this number appears to be inadequate if India were to regain its peak vaccination rate of around 4 million doses a day seen in mid-April. In the most recent seven-day period, however, as supplies ran short and a resurgent wave of infections forced people indoors, this number has come down to about 2 million.

At specific levels, too, the allotments made by the Union government suggested states will not be able to sustain the pace of vaccinations in the 18-44 age group. According to the Delhi government, in the 10 days since the drive began, 365,262 people in the younger age group have been given doses (including those by private hospitals).

The Centre’s allotment for Delhi government for the month of May stood at 360,530. Even if an equal number was to be augmented by private hospitals, as per the rate seen till May 10, the shots for those in the 18-44 group for the month may run out by the third week, and overall vaccination throughout May is likely to fall short of the projected 1 million doses.

According to the Co-WIN dashboard, 173.7 million doses of coronavirus vaccines have been administered to people in India, of which 136.5 million are first doses. Among these, 18.9 million have been given to people younger than the age of 45.

“Even though effectiveness of vaccines in disrupting transmission cycle is still not fully known, we do know that it reduces disease severity, and that will eventually also help in breaking the transmission cycle. The more vaccine, especially make in India ones, are available, better it is for the Covid-19 vaccination programme,” said Dr K Srinath Reddy, founder, Public Health Foundation of India