The relative cost of turning out is affected primarily by party organizations. Good party organizations have polling booth workers who go to the homes of supporters and assist them in coming to vote, working around employment and housework.

The relative cost of turning out is affected primarily by party organizations. Good party organizations have polling booth workers who go to the homes of supporters and assist them in coming to vote, working around employment and housework.

Party operatives can also use threats — of negative consequences for supporters who do not turn out or non-supporters who do — to affect the relative cost of turning up to vote. One should expect an incumbent party like the BJP that has strengthened its grip on political financing and developed an effective media strategy to particularly reap the reward of increased turnout among supporters. 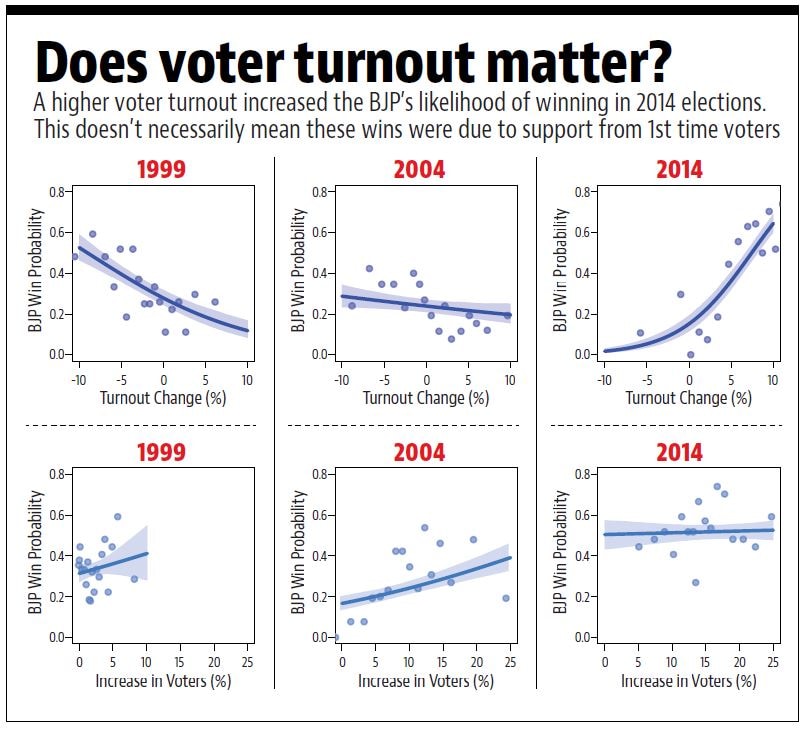 The relative benefit of turnout can be affected by the strength of duty a citizen feels to vote or the relative “attachment” a voter feels to a candidate or a party, as compared to other options on the ballot. For instance, voters might be more willing to come out and vote for the BJP due to the charisma of Narendra Modi — but that charisma hasn’t really changed between 2014 and 2019. Alternatively, voters may come to polls because they are upset with the recent performance of government — e.g., due to demonetization or rural distress — and thus see a clearer benefit in voting the BJP out of power. One should then expect regional parties and the Congress to benefit from “anti-incumbency” of the BJP. These theories, then, predict different relationships between voter turnout. The party organization approach suggests that the greater the turnout change in the constituency, the greater the electoral chances for the BJP. The voter accountability approach suggests the opposite — the greater the turnout change in the constituency, the worse it is for BJP’s electoral prospects.

Using data provided by the Trivedi Centre for Political Data (TCPD) at Ashoka University, we looked at the turnout changes in three national elections, as compared to the previous election — 1999 (vs. 1998), 2004 (vs. 1999) and 2014 (vs. 2009) — and the impact of this on the probability of the BJP winning. (Unfortunately, turnouts in 2004 and 2009 can’t be compared due to a change in constituency boundaries).

The top 3 panels of the figure plot the probability of BJP winning, i.e., its strike rate, against the turnout change in at the constituency level in 1999, 2004, and 2014 using a statistical method known as binary logistic regression.

It is often argued that turnout changes are capturing the energy of young voters. However this might not be the case always. Increase in young voters is a bigger function of the new voters which are added to the electoral roll between two elections, as a higher turnout could be a result of just more older voters coming to vote.

The bottom 3 panels consider the relationship between change in the number of voters at the constituency level compared to the previous election and the BJP’s strike rate in 1999, 2004, and 2014. There is a discernible negative relationship between turnout change and the probability of the BJP winning in 1999 and 2004, when the BJP was the incumbent. And there is noticeable positive relationship between turnout change and BJP’s strike rate in 2014, when the BJP was the opposition. Thus, turnout change is associated with anti-incumbency in all 3 elections (and the association is strong enough that academics would classify it as a “statistically significant relationship” in each election). The general trend, thus, provides evidence for the voter accountability approach. By contrast, no discernible relationship is observed, with the exception of 2004, for new voters and the BJP’s strike rate (even in 2014). This may seem surprising to election analysts, as most surveys showed young voters as more supportive of the BJP in 2014.

But it is important to note that young voters do not turn out as much, canceling out their effects on the election outcome. For instance, in 2014 there is a negative relationship between the percentage of new voters and the turnout change.

But will this election follow the trends of the past? The BJP has built a formidable party machine that is effective at mobilizing voters; perhaps it can reverse the usual trend. On the other hand, many voters express frustration at the economic performance of the government over the past 5 years. It is again a battle between party organization and voter accountability. In a few weeks, we’ll know what wins out.