Polling was held Tuesday for 72 assembly constituencies as part of the second and last phase of elections in Chhattisgarh. The first phase of elections in 18 Maoist-affected assembly constituencies was held on November 12 amid tight security and sporadic incidents of violence.Eight Maoists were killed and five jawans of the Commando Battalion for Resolute Action (CoBRA) were injured in two separate encounters during the first phase of polling. Election officials recorded more than 70% turnout on November 12. For more on Chhattisgarh assembly elections 2018, click here.The BJP, which has been ruling the state for 15 years, and the Congress have been traditional rivals in Chhattisgarh. This time, however, former chief minister Ajit Jogi’s newly floated outfit Janata Congress Chhattisgarh and Mayawati’s BSP have joined hands, turning the elections into a three-cornered fight.Reach highlights here:-

71.93% voter turnout in phase 2 of Chhattisgarh assembly polls till 6pm, says Election Commission at press conference in New Delhi. This would make the overall turnout in the election 74.17% against 77.42% in the 2013 state election. The figure is provisional, says the poll panel.

Polling for the second and final phase of Chhattisgarh elections entailing 72 constituencies spread across 19 districts officially ended at 5pm. However, booths will close after people still standing in queues have voted.

EVMs & VVPATs being sealed at polling station in Baloda Bazar's Simga after the second phase of voting for #ChhattisgarhElections2018 concludes. Voting still underway at the polling booths where voters are in the queue pic.twitter.com/RYR0CAoZgu

64.8 % voter turnout till 5 pm in the second phase of Chhattisgarh polls, reports ANI.

58.47 % voting recorded till 4 pm in the second phase of voting in Chhattisgarh.

Cong leaders do not sit together even in a chopper: Raman Singh

The Congress leadership remains divided. There have been so many reports about a fight between the Congress leadership in Chhattisgarh. There are many factions, and several chief ministerial aspirants... the divide is so deep that their leaders do not even sit together in a helicopter: Raman Singh

Cong got sympathy votes in Bastar in 2013 after Maoist attack: Raman Singh

There was sympathy for the Congress after its top leadership was killed in a Maoist attack in Jhiram valley in Bastar months before the 2013 election. The Congress won eight out of 12 seats in the Bastar region. There is no such factor this time. Moreover, we have done a lot for the welfare of tribals: Raman Singh.

BSP took a little over 4% votes in the 2013 elections. We expect that the Ajit Jogi-BSP alliance will pocket 5-6% votes this time... we know Jogi will hurt the BJP in some seats. But the nature of their support base makes us conclude that he will hurt the Congress more: Raman Singh in exclusive interview with HT.

This time, we have been more careful about candidate selection and have made only those changes that we felt were required: Raman Singh in exclusive interview with HT.

No anti-incumbency against govt: Raman Singh

Anti-incumbency works against a government that fails to live up to the expectation of people. If you compare what Chhattisgarh was 15 years back and where it stands now, you will realise that there is a positive mood for the BJP. There is no anti-incumbency: Raman Singh in exclusive interview with HT.

45.2 % turnout recorded till 2:55 pm in the second phase of polling in Chhattisgarh, reports ANI.

Satnam sect leader Baldas has limited appeal, and he will not have much impact... former CM Ajit Jogi, who also has considerable influence among Satnami voters, is also in the fray. He has an alliance with the BSP and is eating into the Congress’s vote share: Raman Singh, in exclusive interview with HT.

An improvement in BSP’s performance over the 2013 elections when it won one seat in Chhattisgarh will, for one, firmly establish her potential to damage the Congress in states where it has a reasonable chance, say political analysts..

Mayawati has much in stake in Chhattisgarh

If the Mayawati-Jogi alliance does pay off in Chhattisgarh, it would considerably boost her ability to negotiate a better deal from her allies in Uttar Pradesh, and beyond in 2019, say political experts.

Political analysts say Mayawati is attempting a repeat of Karnataka in Chhattisgarh, hoping to emerge as kingmaker along with Ajit Jogi in case both the Congress and the BJP fall short of majority.

BSP had been in talks with the Congress for an alliance, but it broke after the latter turned down Mayawati’s demand for about a dozen seats.

The Ajit Jogi-BSP combine has fielded about a dozen rebels from the Congress and BJP.

In the 2013 election, the BSP had fielded its candidates in all 90 seats and won more than 5.5 lakh votes with a share of 4.4 per cent, but had one just one seat in the state. This time, it is looking to make more gains in alliance with Ajit Jogi’s Janata Congress Chhattisgarh.

444 out of a total of 19,336 polling booths have been identified as sensitive, and security has been tightened in these areas.

25 per cent voting have been recorded till 12.30pm in the second phase of Chhattisgarh assembly elections, say election officials

Ajit Jogi is hoping to capitalise on the BSP’s core support among scheduled caste voters of Bilaspur division, which accounts for 24 assembly seats, out of which 12 are with the BJP, 11 with the Congress and 1 with the BSP, to upset poll calculations, say party insiders and political analysts.

The 72 seats that are voting today are spread across Raipur, Durg, Bilaspur and Sarguja divisions. With Ajit Jogi allying with the BSP, nearly 20 seats in Chhattisgarh are witnessing a triangular contest. 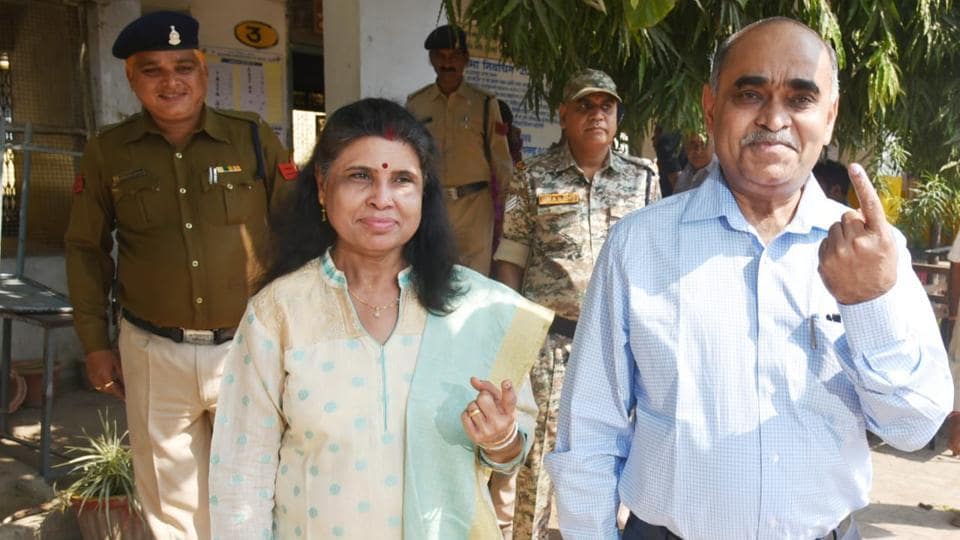 Technical snags in EVMs in some places

There were reports of technical snags in electronic voting machines (EVMs) at some places and corrective measures were taken, an election official told PTI.

There are 19 women among the total 1,079 candidates, who are trying their luck in this phase of the elections. 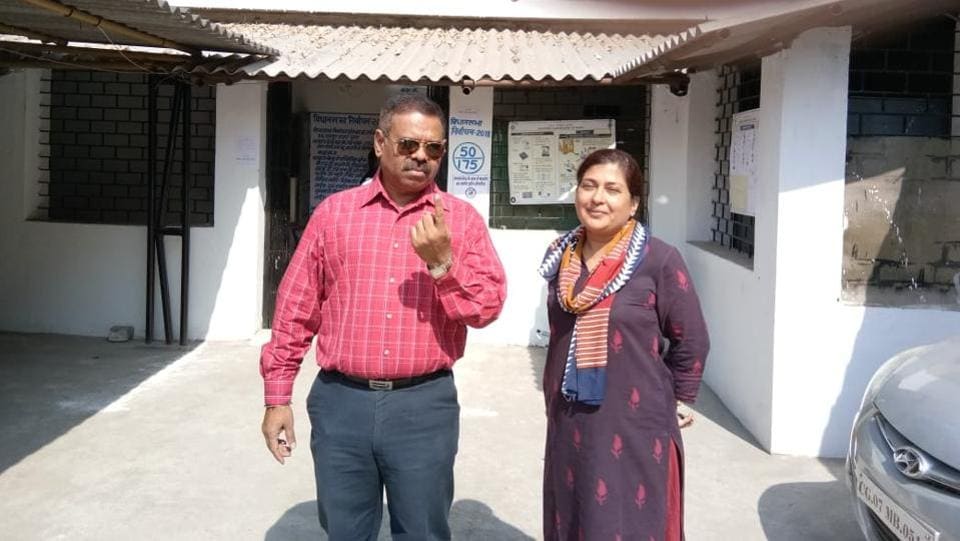 Elaborate security arrangements in place, including deployment of helicopters and drones. Polling being held in over 19,000 polling booths. Over 1,00,000 security personnel positioned.

Seats with highest and lowest number of candidates

An electorate of over 1.5 crore, including over 77 lakh male and over 76 lakh female voters, are eligible to vote. There are nearly 1,000 voters from the third gender.

AAP trying its luck in 66 seats

Seat sharing between BSP and JCC

While the Mayawati-led Bahujan Samaj Party (BSP) is in the fray in 25 seats, its ally and former CM Ajit Jogi’s Janata Congress Chhattisgarh (JCC) is vying in 46 seats. 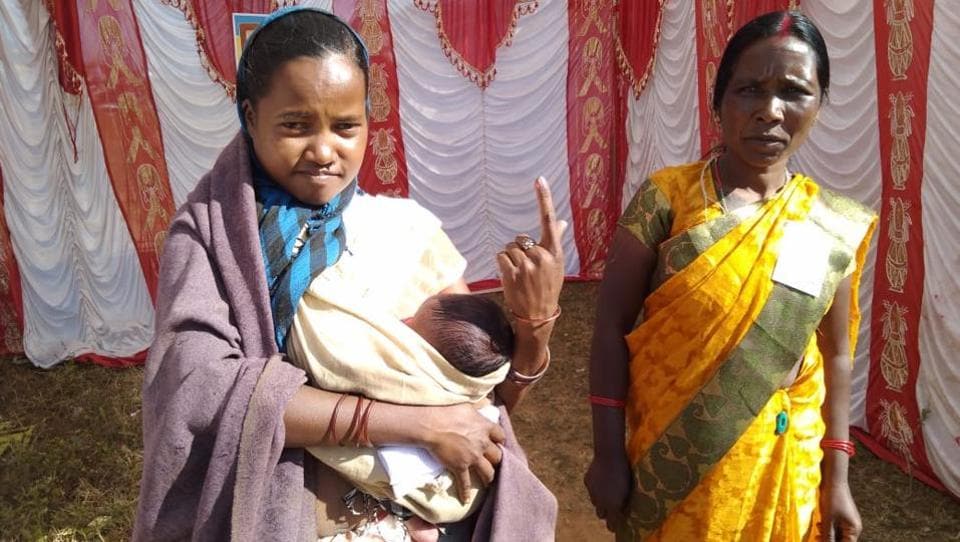 A woman with her newborn went to cast her vote in Jashpur district. The baby was born yesterday.
11:24 am IST

A delegation of Congress leaders led by PL Punia meet the Election Commission in Delhi over alleged attempts to misuse and tamper EVMs in Chhattisgarh, reports ANI.

A delegation of Congress leaders led by PL Punia meet the Election Commission in Delhi over alleging attempts to misuse and tamper EVMs in #Chhattisgarh. pic.twitter.com/6HFnHbS0SA 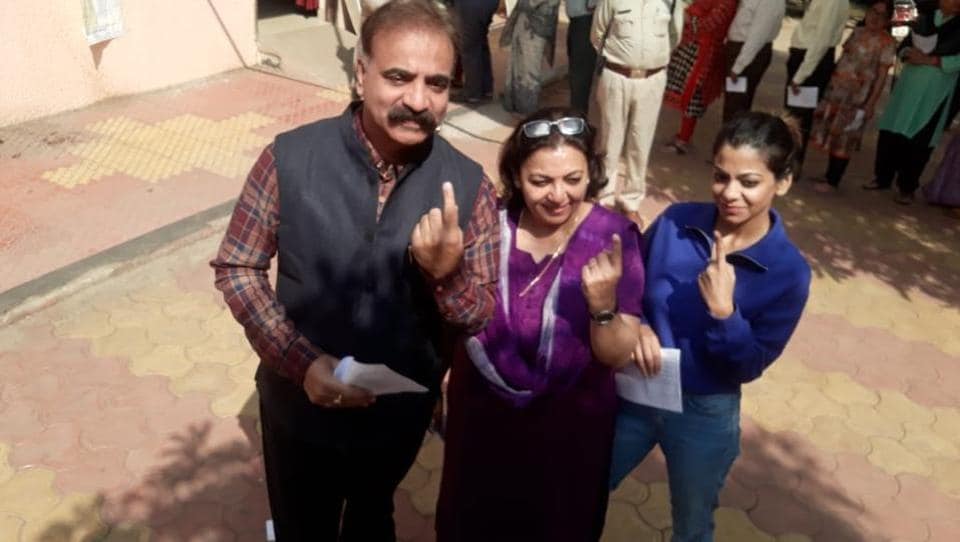 Your vote is your voice. I urge all the voters of Chhattisgarh to come out and cast their vote. Your vote will decide the future of Chhattisgarh: Union minister Rajyavardhan Rathore.

12.54 per cent voting recorded till 10 am, say election officials. 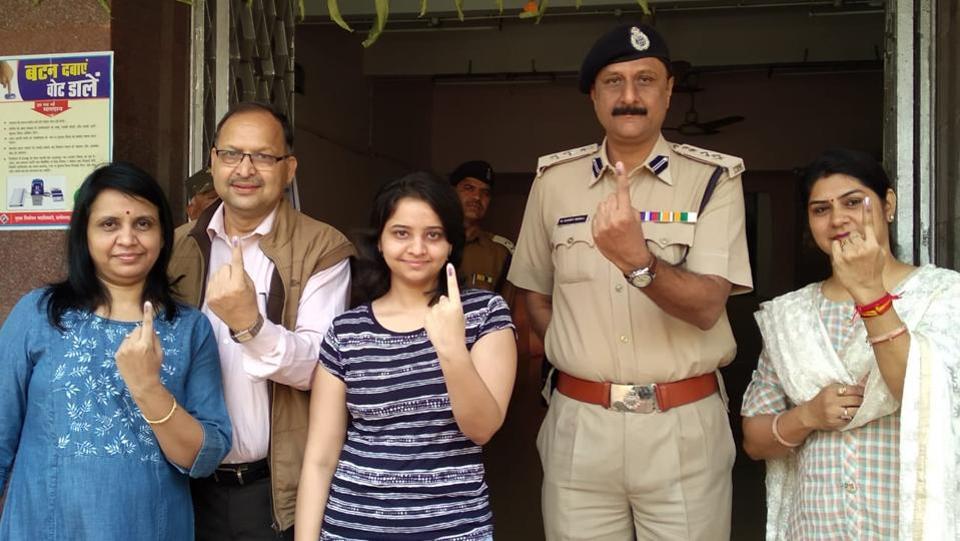 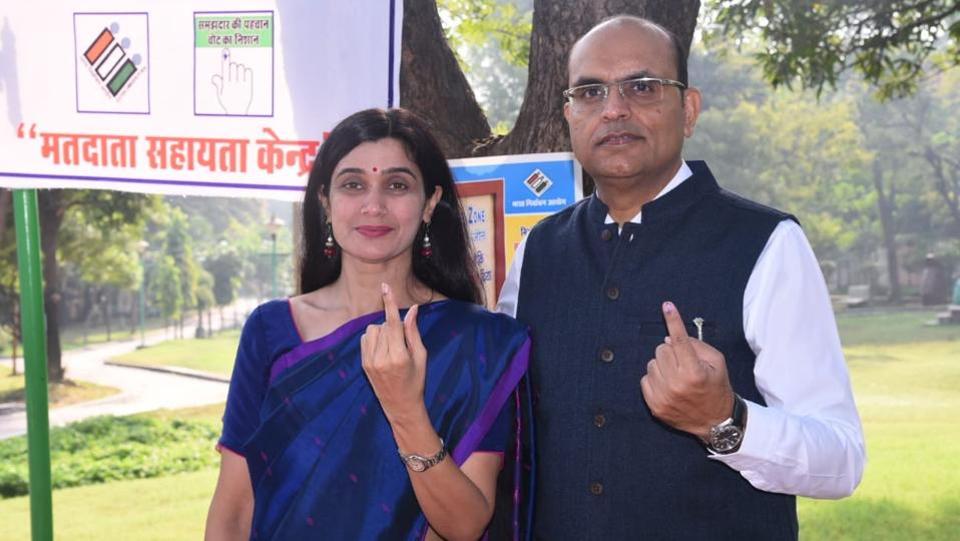 As per election commission, 46 of the 72 seats going to polls today are general, nine are reserved for SCs and 17 reserved for STs. In the 2013 elections, BJP had won 43 seats while Congress had won 27. One seat each was won by BSP and an independent. 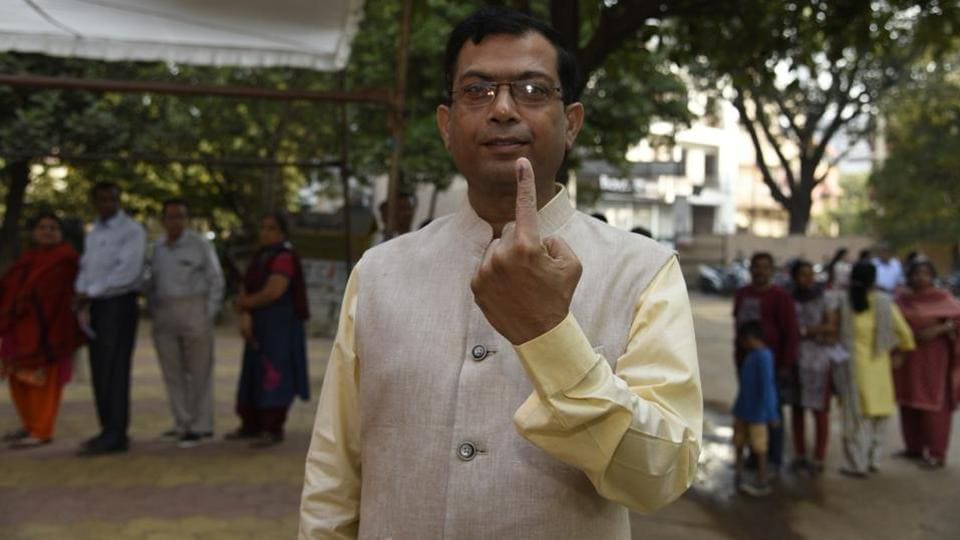 In a tweet, Prime Minister Narendra Modi requested voters of Chhattisgarh to participate in large numbers in “the festival of democracy”.

Visuals from a polling booth in Raipur rural 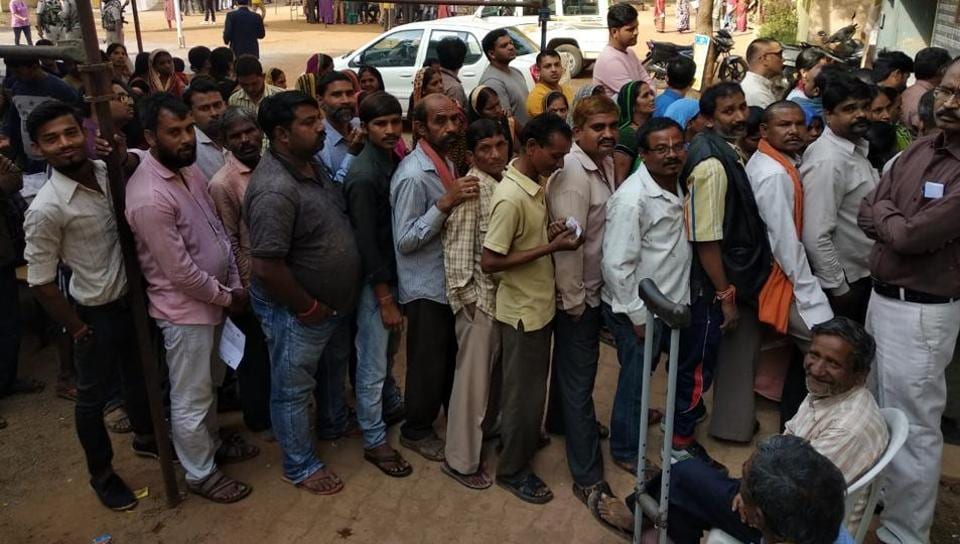 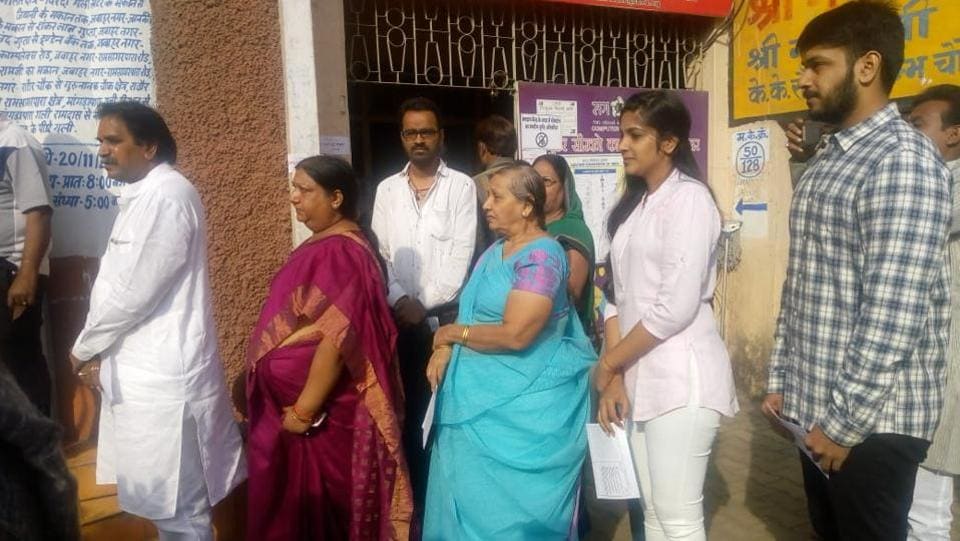 PWD minister Rajesh Munat (in white kurta) queues up along with family to cast vote.
9:40 am IST 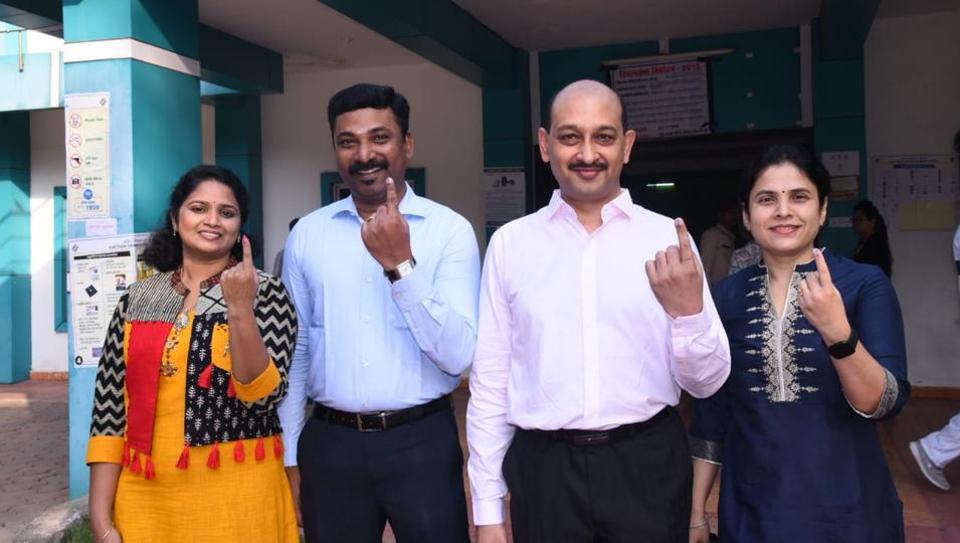 Mahasamund SP votes along with family 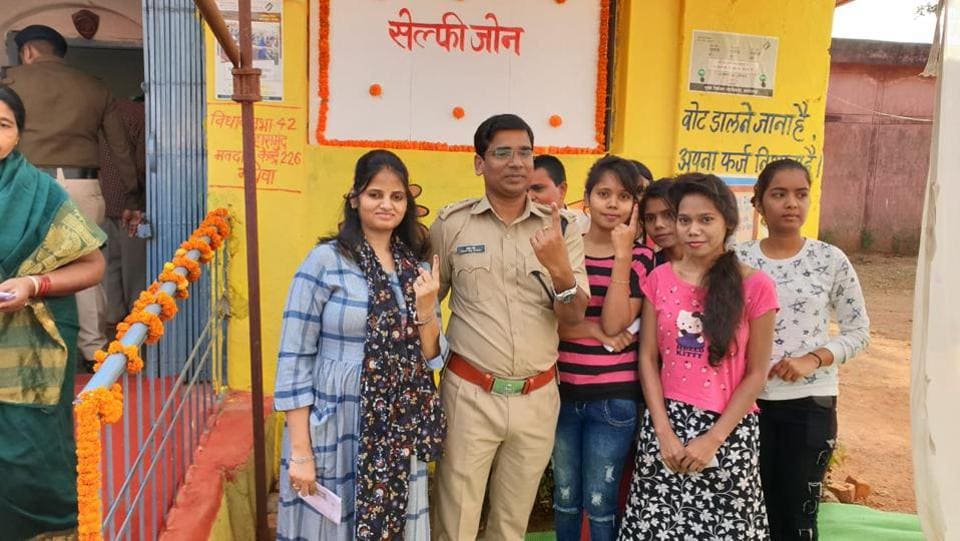 Superintendent of Police, Mahasamund, votes along with his family in a selfie zone outside a polling booth.
9:18 am IST

At least 1,00,000 security personnel, including 607 companies of paramilitary forces, are manning the elections.

1,079 candidates are trying their luck today, including nine cabinet ministers, leader of opposition TS Singhdeo and state Congress chief Bhupesh Baghel. Apart from Ajit Jogi, his wife Renu and daughter-in-law Richa are also in the fray.

Ajit Jogi is banking on the Satnami community and scheduled castes who hold influence in 58 of the 72 seats in Chhattisgarh, say political analysts.

There is a great sense of dissatisfaction with the BJP, and the Congress will win two-thirds of more seats: Leader of Opposition in the assembly TS Singh Deo tells HT.

The Congress leadership is divided in Chhattisgarh, and the Ajit Jogi-BSP alliance will hurt them more: Chhattisgarh CM Raman Singh tells HT in an exclusive interview.

Polling has begun for the 72 assembly constituencies as part of the second and last phase of elections in Chhattisgarh.

The first phase of elections in 18 Maoist-affected assembly constituencies was held on November 12 amid tight security and sporadic incidents of violence.

Voting has begun for the second and final phase of polling on 72 seats. Visuals from a polling booth in Ambikapur #ChhattisgarhElections2018 pic.twitter.com/FybsqIZN17

Voting has begun for the second phase of polling on 72 seats in 19 districts of the state. Visuals from Pendra in Bilaspur #ChhattisgarhElections2018 pic.twitter.com/PGIWYJTMys

Security has been tightened in the state with deployment of over one lakh security personnel in lieu of Maoist attacks.

Ahead of the voting, mock polling was conducted at a polling station in Surguja’s Ambikapur.

Chhattisgarh: Mock polling being conducted at a polling station in Surguja's Ambikapur. Voting for the second phase of #ChhattisgarhElections2018 will begin at 8 am today. 72 constituencies spread across 19 districts are undergoing polling today. pic.twitter.com/UuBjhXawAx

Voting for 72 assembly constituencies to begin at 8 am

Polling for the 72 assembly constituencies as part of the second and last phase of elections in Chhattisgarh will begin at 8 am continue till 5 pm.

Chhattisgarh: Visuals from a polling station in Durg district's Patan. Voting for the 72 constituencies in second phase of #ChhattisgarhElections2018 will be conducted today, polling will begin at 8 am. pic.twitter.com/xeuUCsgsfV