Despite ban, crackers make their presence felt in Delhi

delhi news
Firecrackers have been banned in entirety by the Delhi government, and an older ban by National Green Tribunal (and endorsed by the Supreme Court) bans the sale and use of ones made with barium-based formulations in the National Capital Region (NCR)
Share Via
Copy Link
BySoumya Pillai and Karn Pratap Singh, Hindustan Times, New Delhi

In spite of a ban on the sale and use of firecrackers, a black market has sprung up in various parts of the national Capital, a spot check by HT correspondents found, in what could allow people to violate the restrictions on Diwali and trigger an air pollution crisis.

In at least six localities, HT’s correspondents were told by people ranging from local shop owners to auto-rickshaw drivers that they could help procure firecrackers and deliver them at the doorstep to minimise the risk of being caught. In two of these places, the people allowed the stocks to be inspected for purchase.

Firecrackers have been banned in entirety by the Delhi government, and an older ban by National Green Tribunal (and endorsed by the Supreme Court) bans the sale and use of ones made with barium-based formulations in the National Capital Region (NCR). The ones without barium are known as green firecrackers, but their certification and veracity has been difficult to determine.

In the week leading to Diwali, which is on Thursday, both types of firecrackers were available at multiple spots that HT visited: Kabir Nagar, Rohini, Ghazipur, Bhalswa, Tilak Nagar, and Munirka.

In Kabir Nagar, an auto driver offered to get boxes of green varieties of “anar, phuljhari, and rockets” for a commission. The price quoted by the driver for two boxes each anar (flowerpots), two boxes of phuljhari (sparkles) and one box of rockets eventually came to ₹4,580 and the driver insisted on upfront payment. “I can deliver it to your house but you will have to pay the full amount in cash right away,” the driver said, asking not to be identified, before showing some samples.

In Rajouri Garden, two men approached HT’s correspondents after they made enquiries about where firecrackers could be bought. The two made their way to a small grocery store where the shopkeeper said the items will be home delivered “the next day” with an option of paying later. The shopkeeper showed some samples and a handwritten rate card, but was not able to say if the firecrackers that he would deliver were of the “green” variety. The samples shown were in green packaging but did not carry any verifiable barcode comes with the CSIR-National Environmental Engineering Research Institute (Neeri) certification for green firecrackers.

“What is Diwali without a few crackers? The government has completely finished Diwali,” he said.

Delhi chief minister Arvind Kejriwal on September 15 announced a complete ban on firecrackers till January 1, citing the annual deterioration of air quality crisis that happens during winter. On Tuesday, the air quality index entered the red ‘very poor’ zone for the first time and an analysis by government experts said that even if 50% of the amount of firecrackers burst in 2019 is used this year, air pollution levels will shoot up to ‘severe’. 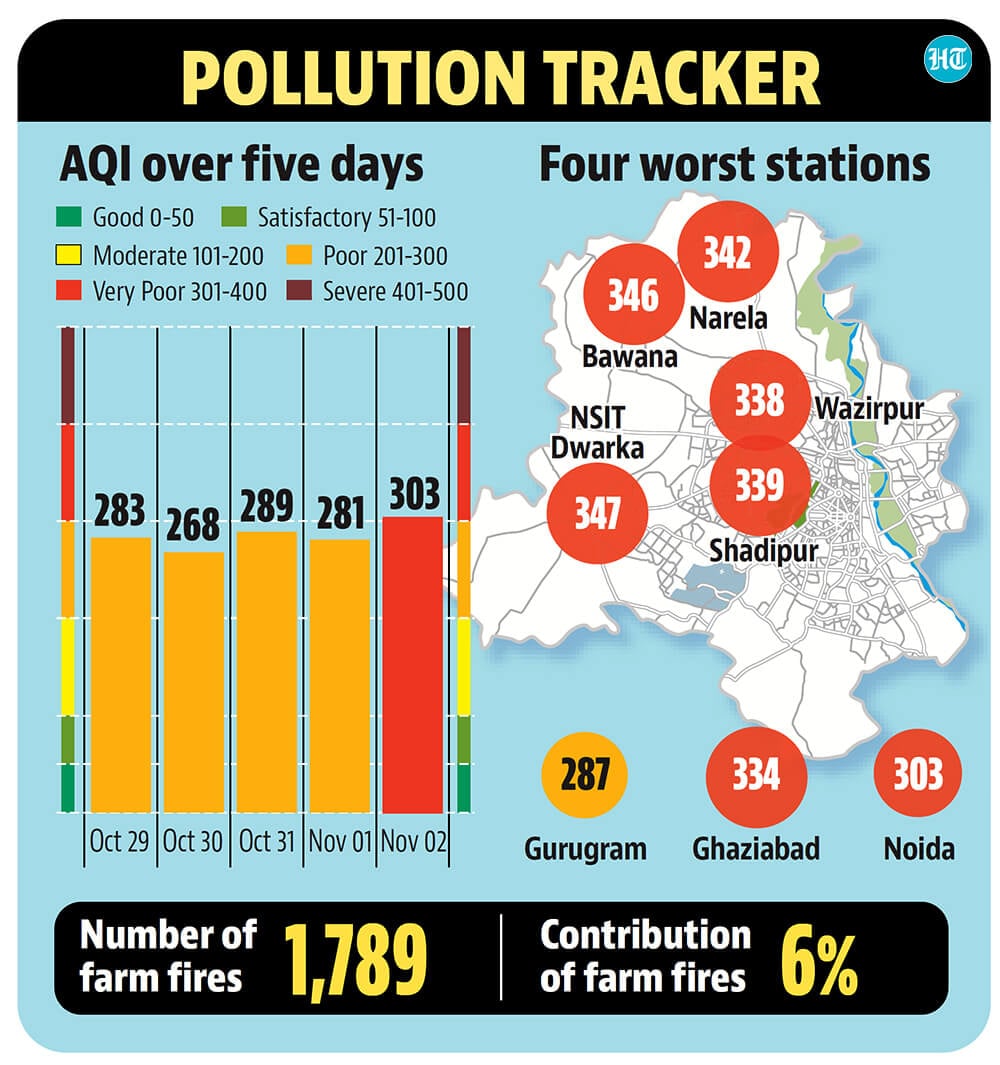 The ban on all firecrackers has been opposed by traders. A group of over 50 licensed firecracker sellers moved the Delhi high court against the ban on Monday, although their plea was turned down. Justice Sanjeev Sachdeva, while hearing the plea by traders seeking permission to sell the so-called green firecrackers in line with the NGT order, was told by the Delhi government its officials have seized over 11,000 kg of firecrackers till October 24 this year.

“We are keeping a close watch on the instances sale, storage and use of crackers. But it has come to our notice that cracker bursting is being reported in some parts of the city over the last two weeks. The problem is that Delhi is a small city and because of its porous borders with Haryana and Uttar Pradesh, it becomes easier for people to get access to these banned items. Since there are no such bans in these states, implementation of the ban in Delhi becomes a little challenging,” said a senior environment department official, asking not to be named.

A seller at the Gold Star Patakha Godam in Gurugram said that the sale of green firecrackers was allowed in Haryana. “We are not doing anything illegal. Firecrackers are allowed here. If someone from Delhi is buying from here, that becomes their problem and the problem of the authorities there,” he said, asking not to be named.

Delhi Police officers said that their action was largely dependent on intelligence inputs, manual checking of legal as well as illegal shops and warehouses, and of vehicles crossing in from Delhi’s borders.

“We have the list of permanent as well as temporary firecracker vendors because they either hold licences or apply for one before Diwali. Keeping a vigil on them or their stocks is easy. But when people run an illegal business just during the festival, it becomes difficult. The only way we can catch such new players is either through intelligence inputs or manual checking. Checking every individual at the border is a tedious task,” said a senior police officer, who did not want to be named.

According to police officers, all police personnel on duty across the city have been directed to enforce the ban and carry out a “massive crackdown” on people involved in the illegal sale and use of crackers.

“We have held several meetings with market welfare associations and shopkeepers to update them about the guidelines on crackers and the legal actions they may face if found violating the orders. Apart from the regular policing, police personnel in plain clothes are also carrying out surprise checks,” said Sagar Singh Kalsi, deputy commissioner of police (north), adding that 17 people have been arrested in seven cases in which nearly 1,700 banned crackers have been seized by the north district police.

“We have seen over the last few years that Delhi’s first big smog spell happens right after Diwali and this is primarily because of cracker bursting. The government has been implementing a ban but the impact will only come with large-scale public awareness and enforcement,” she said, before adding that unless a ban is implemented in NCR towns, illegal trade and firecracker bursting instances are likely to continue..

Resident Welfare Associations (RWA) also agreed that the sale and purchase of firecrackers were happening discreetly in their areas.

“The sale and purchase are definitely happening, but these bans should not be imposed because ultimately the religious sentiments of people are involved. What the government can do is educate people about the impact of bursting firecrackers and how it adversely affects our health. Ultimately, we are all dying breathing this polluted air. Once that awareness comes, people will stop bursting crackers themselves,” said BS Vohra, president of East Delhi RWAs Joint Front.