The railways is also looking at creating a separate bypass for freight trains to reduce the load on tracks that ferry passengers.

The rail ministry has set the wheels in motion to revive and integrate Delhi’s 43-year-old ring rail system with the Metro in a bid to give the Capital a comprehensive suburban network that will unclog the city’s roads, railway minister Piyush Goyal said.

Goyal added the integrated network, coupled with Metro interchanges, can make “50% cars go off the roads”. He said that a study had been ordered to work out what would be needed to make this project work.

The railways is also looking at creating a separate bypass for freight trains to reduce the load on tracks that ferry passengers. “Delhi being in the heart of country, four railways come through Delhi. So the whole Delhi network is clogged like crazy. (With the bypass), whichever train that doesn’t have to come to Delhi will bypass it,” the minister said.

Delhi has 35 km of ring rail network that criss-crosses the 231-km Metro network at several locations. But due to lack of planning, the link between the Metro and rail systems has not been established. 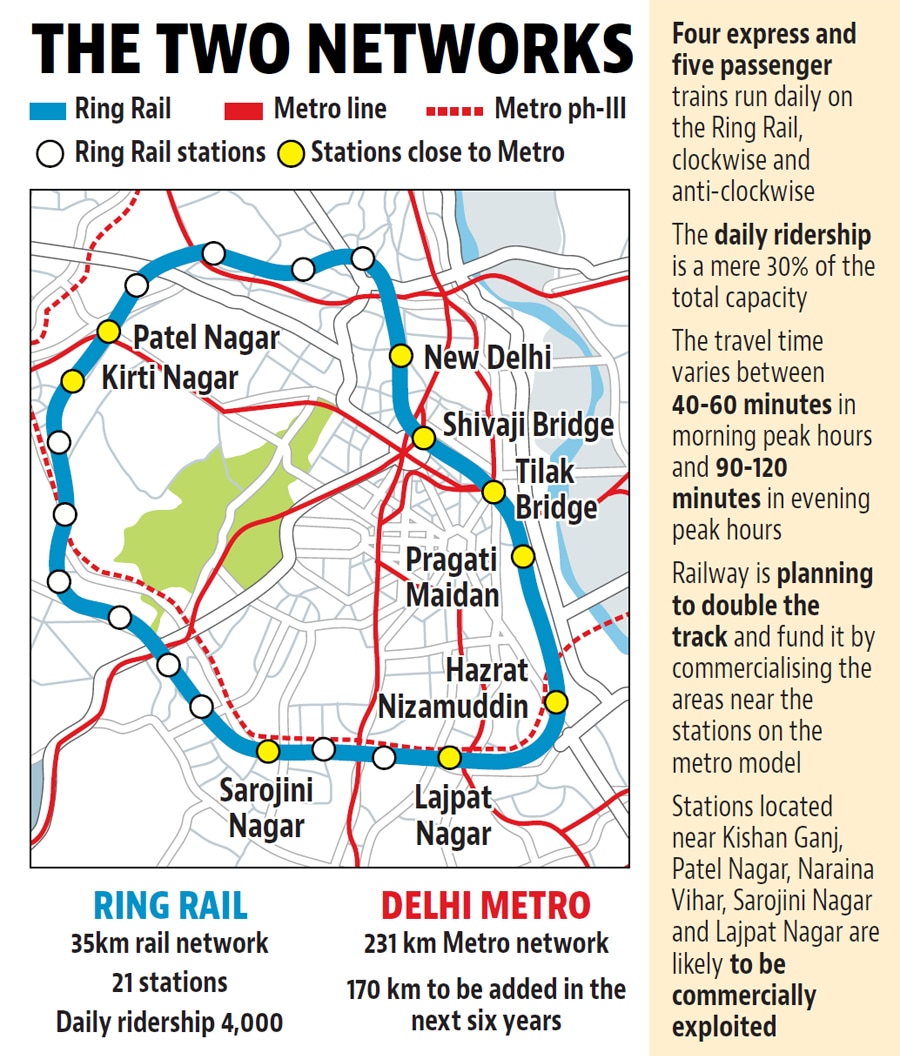 “My officers are already deputed to study a plan for Delhi built around the (suburban) ring railway. Metro interchanges will be there (on top of this). Metro has been a boon for Delhi. Suburban railway, coupled with Metro interchanges, can make literally 50% cars go off roads,” Goyal said.

All seven members of Parliament from Delhi recently met the railway minister and demanded redevelopment and decongestion of the city’s railway stations and suggested that a suburban network could improve connectivity. “We requested the minister to have AC coaches in the suburban railway to attract commuters and improve the existing network. The decongestion of areas around stations was also taken up to make it accessible,” said Maheish Girri, the BJP MP from East Delhi.

According to a senior railway official, a feasibility study has been commissioned to look at the best plan suited for Delhi.

“The study will suggest whether we need to build new lines or linkages to connect the Metro and ring rail systems with each other. We are most probably looking at linkages and interchanges with the Metro system,” said the official, who asked not to be named.

The minister and the official did not give details of the estimated cost of the project.

The ring rail system was constructed in 1975 for carrying goods, and started running passenger trains during the 1982 Asian Games.

The study will also focus on existing and proposed Master Plans and land-use planning along the ring rail routes. “For the revival of ring railway, we need to assess the requirement for additional land for tracks and stations, approach roads and integration facilities,” another railway officer added.

“A suburban rail network is important for any city as the average speed is faster than the Metro system. When the ring rail system was built in Delhi, it was expected to carry a bulk of commuters. But stations have not been properly integrated with the road and the Metro networks. If revived, it will supplement the Delhi Metro and new lines can be built depending on the requirement,” said CB Rao, former director (projects) of the Delhi Metro who has also worked with the Indian Railways as its chief track engineer.

Experts say proper integration with other modes of transport and awareness about the service will be key to ring rail’s revival. “The system is there waiting to be utilised. Delhi’s Metro stations are landmarks in themselves but no one knows about ring rail stations as they are not visible. If these things are done, it will give a much-needed boost to not only ring rail but to the entire Delhi transport system,” said Ryan Christopher Sequeira, deputy manager of transport planning at the Delhi Integrated Multi-Modal Transit System.

Modi and Trump’s speeches went beyond the transactional | HT Editorial