A coalition headed by the BJP and an alliance of six parties stitched together by the opposition Congress will square off against each other as well as the new political groups.

Assam looks set for a three-cornered contest in the coming assembly elections, in which alliances led by the two largest national parties will take on fledgling groups that have added a regional dimension to the race for power.

Elections to the 126 assembly seats in Assam will be held in three phases. The first phase of polling would be on March 27 for 47 seats, second on April 1 for 39 seats, and third on April 6 for 40 seats. Counting of votes will take place on May 2.

A coalition headed by the BJP and an alliance of six parties stitched together by the opposition Congress will square off against each other as well as the new political groups.

Prominent among the new parties are the Assam Jatiya Parishad (AJP) and Raijor Dal (RD), both of which are offshoots of the violent anti-CAA protests that rocked the state in December 2019 and claimed five lives in police firing. The legislation, which seeks to fast-track grant of Indian citizenship to persecuted Hindu, Buddhist, Sikhs, Jain, Parsi and Christian minorities from Muslim-majority Bangladesh, Afghanistan, and Pakistan, has raised concerns among many indigenous groups in Assam of an influx of illegal immigrants from Bangladesh. 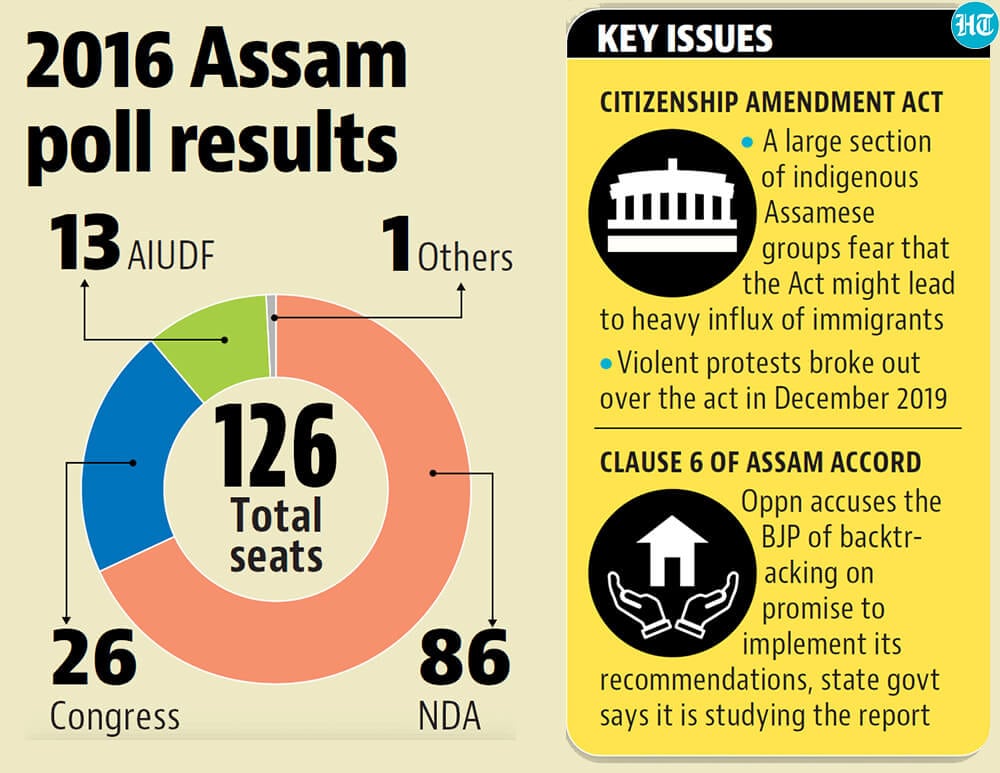 The ruling BJP is banking on winning another term on the strength of its social welfare schemes and infrastructure projects. The new regional parties as well as the Congress are taking a rigidly anti-CAA stance, which they hope would sway voters.

Although seat-sharing talks among these fronts are underway, run-up to the announcement of the poll schedule has already been marked by many rallies across the state.

“The new parties as well as the Congress-led alliance could play spoilsport for the ruling BJP and its alliance partners. A lot would depend on how seat-sharing arrangements are worked out by all parties...,” said Akhil Ranjan Dutta, a professor of political science at Gauhati University.