Home / India News / 2020: A year of great volatility in commodity and financial markets

2020: A year of great volatility in commodity and financial markets

As the global economy moved between bouts of pessimism and optimism in a pandemic-ravaged year, driven by developments on the virus and vaccine fronts and the policy response to the pandemic, expectations and markets also suffered great volatility.
Share Via
Copy Link
Hindustan Times, New Delhi | ByHT Correspondent

2020 saw perhaps the most bizarre economic event in the history of modern capitalism when the price of the futures contract for West Texas Intermediate (WTI) crude, the benchmark for US crude oil prices, turned negative on April 21. To be sure, WTI crude falling below zero that day had a technical aspect to it. “The price plunge was partly due to the way oil is traded. A futures contract is for 1,000 barrels of crude, delivered into Cushing, where energy companies own storage tanks with roughly 76 million barrels of capacity. Each contract trades for a month, with the May contract due to expire on Tuesday (April 22). Investors holding May contracts didn’t want to take delivery of the oil and incur storage costs, and in the end had to pay people to take it off their hands”, a Reuters story explained. This otherwise bizarre event is also the best illustration of the importance of future expectations in a lot of transactions in commodity and financial markets in today’s world.

As the global economy moved between bouts of pessimism and optimism in a pandemic-ravaged year, driven by developments on the virus and vaccine fronts and the policy response to the pandemic, expectations and markets also suffered great volatility. Here are four charts which capture these swings.

US Energy Information Administration (EIA) has daily data on Brent crude prices since May 20, 1987. An HT analysis of this data shows that 2020 saw the highest intra-year variation – the minimum and maximum daily price in a year – of 670.3% in oil prices during this period. This is more than twice the second highest intra-year fluctuation of 326.8%, which happened in 2008, the year when the global financial crisis broke out. 2020 also saw the highest number of instances when inter-day movement in Brent crude prices was more than 5%. To be sure, the EIA data excludes the period of the oil-shock of 1973, when oil prices jumped in a big way. The BSE Sensex, India’s benchmark stock market index, suffered its biggest ever inter-day fall of 13.15% on March 23, a day before Prime Minister Narendra Modi announced a nationwide lockdown. The Sensex fell from its previous day’s close of 29,915.96 to 25,981.24, the lowest value since 26 December, 2016. The year 2020 included 3 trading sessions -- 12, 16 and 23 March that saw among the top 10 biggest inter-day falls in the index history. Daily BSE indices are available from April 3, 1979 on the BSE’s website.

The largest inter-day gain in BSE was seen on 18 May 2009 when it rose by 17.34%. For 2020, the highest inter-day rise was on 7 April 2020 when the index values gained 8.97% which was also the 10th highest historically. Apart from these two instances of high inter-day increases, all the other top 10 biggest inter-day gains for the BSE Sensex are from 1992 or earlier years. 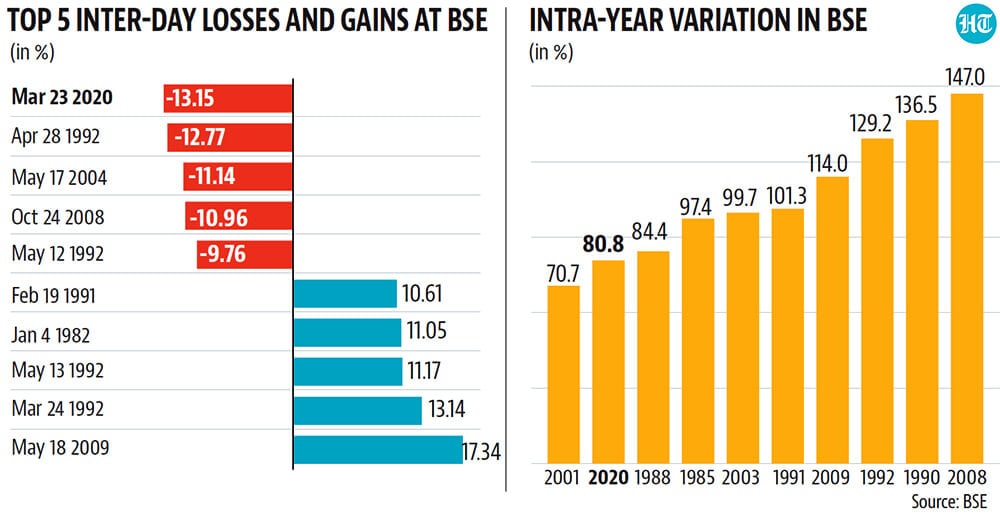 There were nine days in 2020, when the inter-day change in the BSE Sensex was 5% or more. The most volatile year on this count was 2008, the year of the global financial crisis. A comparison of intra-year variation of high and low values at the BSE puts 2020 at the ninth rank, with 2008 topping the charts once again.

Volatility in US Stock markets

Bloomberg has daily data for the Dow Jones Industrial Average (DJIA), US’s primary equity index, since 30 January 1895. The DJIA suffered its fourth highest inter-day fall of 12.9% on March 16 this year. It is the biggest inter-day fall since the Black Monday crash of 19 October 1987, when it fell by 22.61% which was also its biggest inter-day fall in the history of the DJIA. Like in India, equity markets recovered quickly in the US as well. The DJIA closed at 30,303.37 on 17 December 2020, its highest ever value. If one were to look at the intra-year variation in the DJIA’s values, 2020 is ranked 11th. However, except in 2008, all other years of higher intra-year variation happened before the Second World War.

While commodity and financial markets are driven by speculation to a large extent, not all of the volatility in 2020 can be blamed on profit-driven speculation. The Global Economic Policy Uncertainty Index, which quantifies newspaper coverage of policy-related economic uncertainty, reached an all-time high of 423.84 in May this year. This suggests that the uncertainty in markets and policy-making circles perhaps fed into each other. While it has come down significantly since then, the latest available value for October, 2020 was still higher than what it was in the end of 2019 or beginning of 2020. 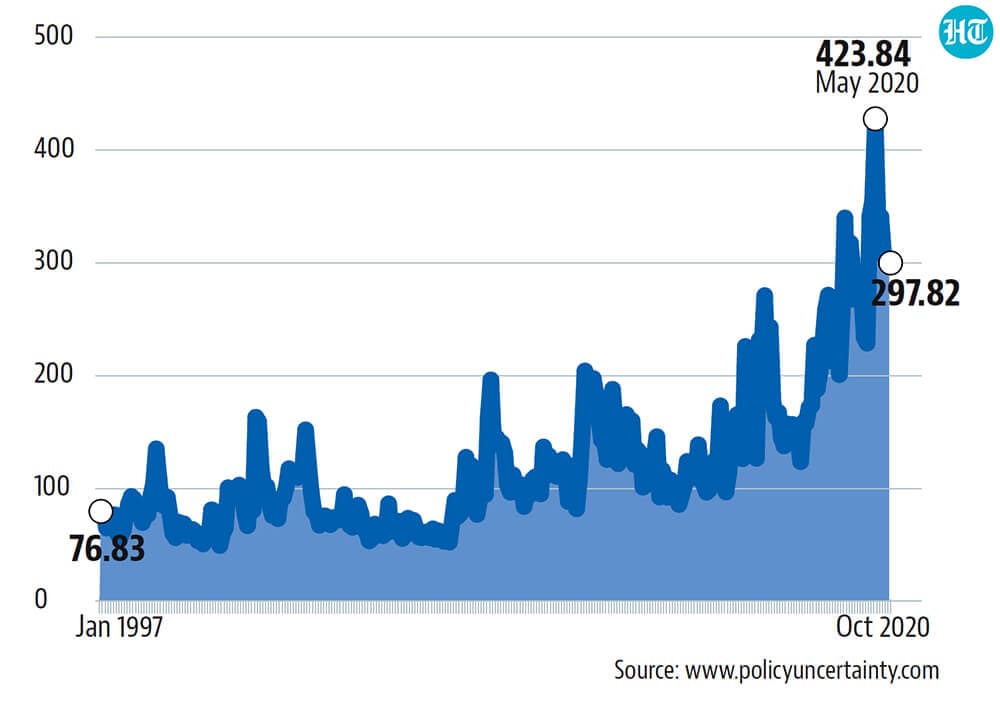