It was not immediately clear what proportion of the seroprevalence was due to vaccination or a past infection.

For every 100 people in Delhi, 97 have some level of antibodies that react with Sars-CoV-2 because they have had an infection or a vaccine dose, the latest serological survey suggests, according to preliminary results released by the government on Thursday.

Experts said the findings are consistent with two significant factors: Delhi had a devastating wave of infections in April-May that appeared to leave very few people uninfected, and the city’s cases have not risen even though almost all activities have opened up and the public appears not to be adhering to Covid-safe behaviour such as wearing masks and maintaining distance.

“The report of the sixth sero-survey has come in and the overall positivity was found to be 97%. In all the 11 districts, the positivity was over 90%. This shows that a huge proportion of the people in Delhi have had the infection and many others have been vaccinated. This report is very positive,” said Delhi health minister Satyendar Jain. 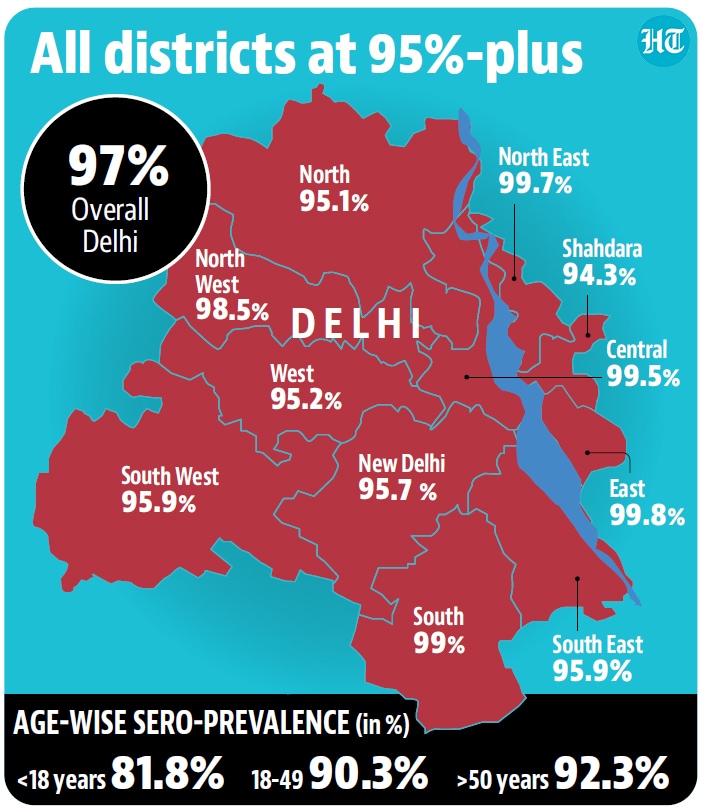 Herd immunity is when enough people have adequate protection from immunity so that an infectious disease stops spreading to vulnerable people. But experts say there are several unknowns, such as how long antibodies will remain protective, and the evolution of the virus, which can mutate to become more resistant.

It was not immediately clear what proportion of the seroprevalence was due to vaccination or a past infection. But a proxy can be considered in the seroprevalence seen among children, who are not yet eligible for vaccines. The report found that a little over 80% of the samples taken from children were positive for antibodies – this proportion would have been the result of a natural exposure to the virus.

The seroprevalence in the latest round is a jump of 41 percentage points from the fifth survey, the sampling for which was only partial and took place before the April-May wave of infection.

A lot has changed since then.

Between April 15 and October 28, the Capital recorded 655,614 infections. In mid-April, a total of 2.1 million doses were administered to people in Delhi. As on Thursday, 20.3 million doses have been administered, and 86% of the 15 million adult population eligible to take a shot has received at least one dose.

“This result was completely expected after the huge wave of infection this year. The number of cases that have dropped drastically over the last few months is not because people suddenly started following Covid-appropriate behaviour — if we go out, we will see many are not following it still — but because of a high exposure to the virus in the population,” said Dr Sanjay K Rai, head of the department of community medicine at AIIMS.

Rai added that the findings give some basis to lift curbs further. “A severe third wave is unlikely in Delhi. Yes, there will be fluctuations in the number of cases, if we are recording 30 today, it might go up to 300. But it will not be like any of the previous waves. This is a good result and we should now try and go towards normalcy. If not now, when?” he said, while adding that there must be close monitoring for any new variant.

The latest survey was based on samples taken from 28,000 people. “The kits that are used for sero survey just detect the presence of antibodies against the virus – it cannot tell the difference between antibodies due to a previous infection or immunisation. However, neutralising antibody levels will be tested for a proportion of the samples, which will give us some idea as to what proportion of the people might have had natural infection and what proportion developed antibodies through vaccination,” said Dr Pragya Sharma, who leads the sero-surveillance study and is the professor of community medicine at Maulana Azad Medical College.

A report with the results of neutralising antibody levels as well as about vaccine hesitancy or eagerness among people in Delhi will be submitted after Diwali, according to an official from Delhi’s health department.

The sero prevalence is also slightly higher among the women –90.1% compared to 88.2% among men. These figures don’t average up to the overall seropositivity of 97% because it is yet to be adjusted for the sensitivity of the testing kits.

The district-wise sero-prevalence has already been weighted according to the age and gender constitution of the people living in the district as well as the sensitivity of the kits.

“Sero-conversion or developing antibodies after vaccination depends on the body’s immune mechanism. In some people with compromised immune system or chronic illnesses, the antibodies might not be developed. However, what we have seen is that there isn’t a significant difference in the number of persons who developed antibodies after receiving Covaxin or Covishield, meaning both the vaccine offer comparable protection,” said Dr Sharma.