Agriculture crisis: Farmers finding it difficult to recover their cost of production

Demonetisation and the Goods and Service Tax disrupted economic activity in the informal sector, which seems to have left a lasting effect on food prices.

Doubling farmer incomes was a key promise made by the Narendra Modi led government after it assumed power. As its tenure comes to an end, farm distress has emerged the biggest headache for the Bharatiya Janata Party’s (BJP) 2019 campaign. For a government which takes a lot of pride in having maintained India’s status as the fastest growing economy in the world intact, the contours of the current farm crisis are radically different from issues in the rest of the economy. This is because the problem is rooted in prices and not production growth.

Gross Value Added (GVA) in agriculture has grown at more than 3% since 2016-17. The 2014-15 and 2015-16 growth rates were lower because these were drought years. Yet the farm distress narrative has gained in momentum. The reason becomes clear when one looks at food inflation statistics -- it has continuously declined from double digit figures under the last phase of United Progressive Alliance (UPA) II government and has entered negative territory in the recent period. Put otherwise, food prices have fallen. A healthy production growth accompanied by a crash in prices has dealt a body blow to the viability of agriculture as an economic activity. Anecdotal accounts from across the country suggest that far from incomes doubling, farmers are finding it more and more difficult to even recover their cost of production.

The problem of viability 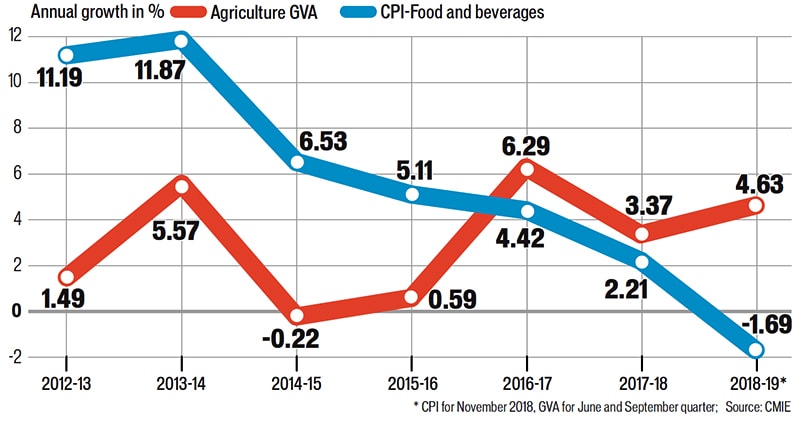 A multitude of factors has contributed to this situation. India adopted inflation targeting as the anchor of its monetary policy under the present government. Food items are the biggest component of the Consumer Price Index basket. Global food prices have been declining. Demonetisation and the Goods and Service Tax disrupted economic activity in the informal sector, which seems to have left a lasting effect on food prices. To be sure, the government has tried to undo the damage by announcing a significant hike in Minimum Support Prices earlier this year, but this has not arrested the deflation in farm prices so far. The implications of the viability crisis in agriculture are far from over.