Disagreeing with govt is not sedition, says SC

It is not seditious to have views different from the government, the Supreme Court said on Wednesday as it junked a petition that sought action against former Jammu & Kashmir chief minister Farooq Abdullah for his comments on the scrapping of Article 370 and the bifurcation of the state into two Union territories.

The apex court maintained that “dissent” is a form of free speech and expression, and that these rights are protected under the Constitution — comments that come at a time when governments and law enforcement agencies around the country have been quick to slap sedition charges against critics. 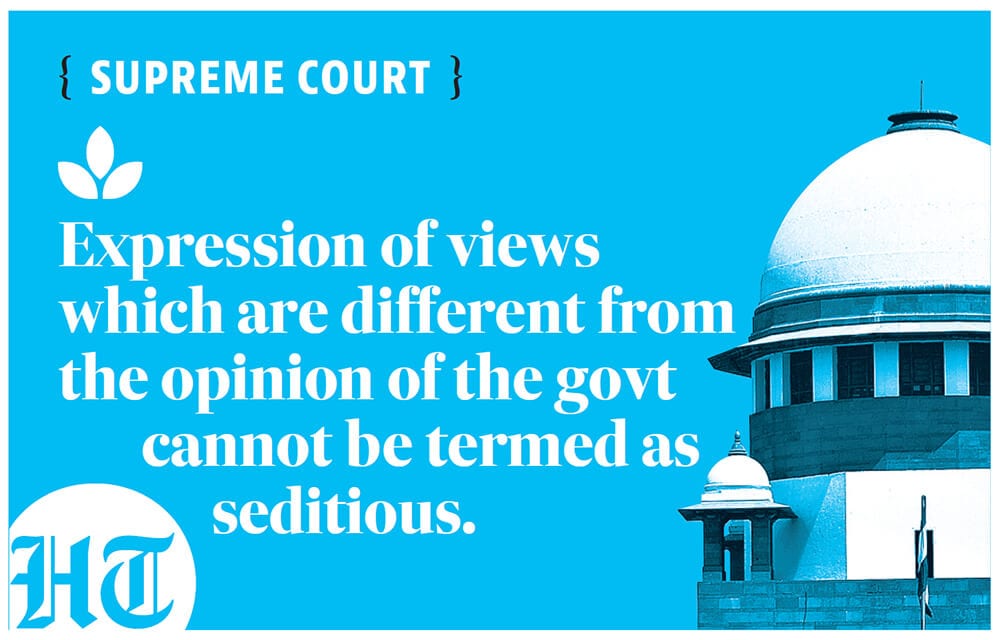 “Expression of views which are different from the opinion of the government cannot be termed as seditious. It cannot become sedition only because one has a different view,” emphasised the bench, comprising Justice Sanjay Kishan Kaul and Justice Hemant Gupta.

India’s sedition law has an interesting past — it was introduced by the British in 1870, decided to be dropped from the Constitution in 1948 after discussions of the Constituent Assembly. The word “sedition” disappeared from the Constitution when it was adopted on November 26, 1949 and Article 19(1)(a) gave absolute freedom of speech and expression. However, section 124A stayed in the Indian Penal Code. In 1951, Jawaharlal Nehru brought in the first amendment of the Constitution to limit the freedom under Article 19(1)(a) and enacted Article 19(2) to empower the State put curbs in the form of “reasonable restrictions” on right to free speech.

In 1962, in Kedar Nath Singh Vs State of Bihar, a constitution bench of the top court upheld the validity of the sedition law under the IPC and also defined the scope of sedition. It held that Section 124A only penalised words that reveal an intent or tendency to disturb law and order or that seem to incite violence. This definition has been taken as precedent for all matters pertaining to Section 124A since.

“Just because you dissent from the views of the government, will it become sedition?” the bench asked the lawyer for the petitioners, Rajat Sharma and Neh Srivastava. Vadodara-based Sharma is secretary and trustee of organisation “Vishwa Guru India Vision of Sardar Patel” while Srivastava is a social activist from Uttar Pradesh’s Ghaziabad.

The court also imposed a fine of ₹50,000 on the petitioners for filing what it termed a “frivolous” petition.

“What kind of a petition is this? People must be penalised for filing such petitions,” commented the bench after the petitioners’ counsel failed to substantiate the claim that Abdullah called for support from China and Pakistan against negation of Article 370, which did away with the special status granted to J&K and its citizens.

“Since the statement of Farooq Abdullah is anti-national and seditious, government of India should be directed to take appropriate action, declaring him an undeserving candidate as a member of parliament,” stated the petition, citing certain statements made by Abdullah on a national TV channel. The petition had cited a statement by BJP spokesperson Sambit Patra as a chief ground. It relied upon some media reports to quote Patra as claiming that Abdullah had delivered a speech seeking China’s help in restoring Article 370. But this averment could not be corroborated by the petitioners’ lawyer Shiv Sagar Tiwary even as the bench asked repeatedly as to when and where Abdullah issued the alleged statement.

On February 23, a Delhi court, while granting bail to climate activist Disha Ravi raised serious questions about the Delhi Police’s invocation of the sedition charge.

According to the data from the National Crime Records Bureau (NCRB), uploaded on its website, cases of sedition and under the stringent UAPA for terror cases showed a rise in 2019, but only 3% of the sedition cases resulted in conviction.

The Ministry of Home Affairs, in a written reply on February 10, informed the Rajya Sabha that of the 96 people arrested for sedition in 2019, only two were convicted and 29 acquitted. Investigations and trials are ongoing in the rest.

Former Supreme Court judge Justice Deepak Gupta told HT: “The law on sedition is widely misused... The law should either be abolished or be made non-cognizable, as it was prior to 1974, so that only the State should be competent to file such a complaint, that too after scrutiny or sanction by a senior officer.”

Retired in May 2020, justice Gupta added: “In 1962, the Supreme Court in Kedar Nath Singh case read down Section 124A to say it applies only if there is incitement to violence. This is a necessary ingredient for applying sedition. But magistrates across the country seem to be unaware of this or are ignoring it. I hope the Supreme Court lays down guidelines soon in an appropriate case to prevent misuse of this provision.”

Senior advocate Rakesh Dwivedi told HT: “It will lead to a dictatorship if sedition charges are slapped for criticising a government. I fully support the views of the bench. Mere criticism of government or its policy, howsoever strong it may be, cannot amount to sedition... A charge under sedition can be invoked only when certain acts incite violence or seeks overthrowing a democratically elected government through violent means.”