In the 10th round of negotiations with a 41-member delegation representing farm unions on Wednesday, the Union government offered to suspend the three pieces of legislation in its most far-reaching proposal yet.
READ FULL STORY
By Zia Haq, New Delhi

Farm unions protesting three new agricultural laws have rejected the Union government’s offer to put the legislation in abeyance for at least one-and-a-half years — a decision that has deepened the crisis just when it appeared that a 56-day-long agitation by tens of thousands of farmers on the Capital’s borders could finally be resolved.

In the 10th round of negotiations with a 41-member delegation representing farm unions on Wednesday, the Union government offered to suspend the three pieces of legislation in its most far-reaching proposal yet.

But the farmers, instead of agreeing to meet the government midway, hardened their already rigid position on Thursday, saying they will not budge from their demand for a complete repeal of the laws.

After several rounds of internal discussions over the government offer, the Samyukta Kisan Morcha, the platform of farm unions leading the agitation, said on Thursday evening that the farmers had unanimously rejected the proposal.

“The proposal to suspend the laws is not acceptable because our demand is a repeal of the laws,” said Darshan Pal, a senior leader of the agitation.

A statement put out by the unions said a full general body meeting of the Samyukt Kisan Morcha was held on Thursday. “The proposal put forth by the government yesterday, was rejected. A full repeal of three central farm acts and enacting a legislation for remunerative MSP [minimum support price] for all farmers were reiterated as the pending demands of the movement,” the statement said.

In Wednesday’s talks, the government said that it would move an affidavit before the Supreme Court stating it’s decision to put the laws in abeyance till a solution to farmers’ demands was found. To discuss the issues raised by farmers, which includes a law guaranteeing assured prices for their produce, the government had also told farm unions that it proposed to set up a committee of representatives as well as experts who should be nominated both by farm unions and the government to examine “all agitation-related issues”.

The move was hailed by experts as a step back by the government, and they expected farmers to reciprocate. The farm unions, too, said they would discuss the government’s fresh offer, sparking hopes of a resolution. But Thursday’s inflexible position by the farmers now leaves few options to resolve the crisis.

Rakesh Tikait, the leader of Bharatiya Kisan Union (Tikait faction) said the full general body of the farm unions felt that accepting the government’s proposal would defeat the purpose of the agitation. “We will attend the talks with the Centre tomorrow where we will tell them that their proposal is not acceptable,” he said.

The government has pushed a set of agricultural laws to ease restrictions in farm trade, allow traders to stockpile large quantities of food stocks for future sales and lay down a national framework for contract farming based on written agreements. 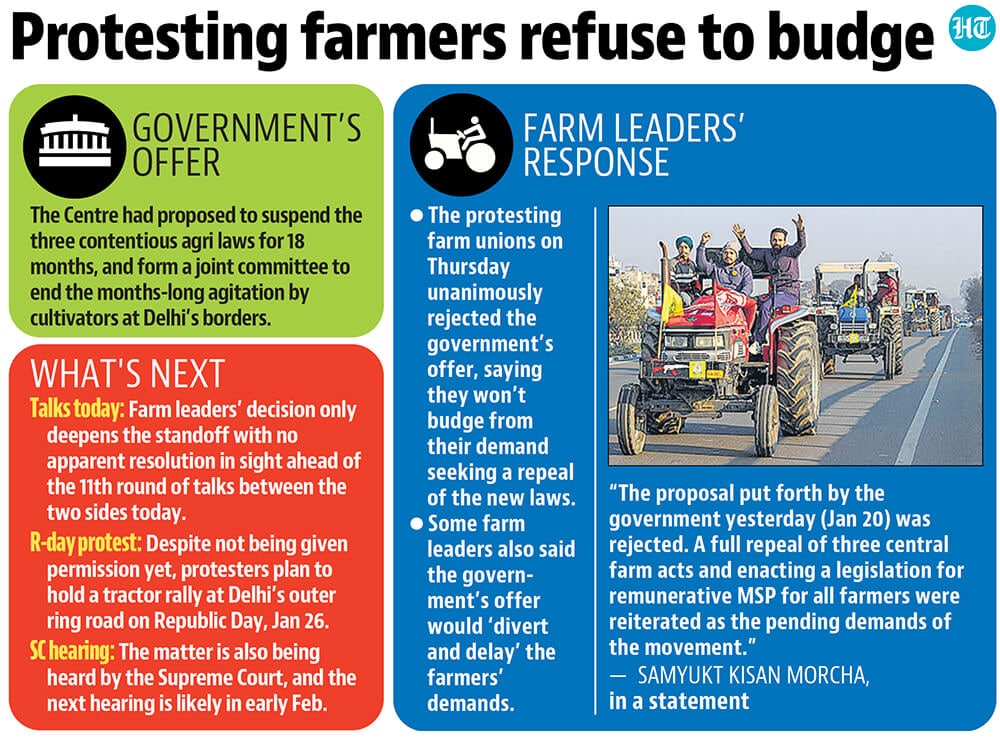 Farmers staging a massive protest on several of Delhi’s border points say the laws will erode their bargaining power and leave them at the mercy of big corporations. They have demanded a full repeal of the three agricultural laws and have also sought a legal guarantee of assured prices for farm produce.

On January 12, after two days of deliberation, the Supreme Court suspended the pro-reforms farm laws until further order. The bench dealing with the case — headed by Chief Justice of India SA Bobde — also appointed a committee to look into farmers’ grievances over the laws.

Agriculture minister Narendra Singh Tomar on Wednesday said the Supreme Court had put the laws in abeyance for a short time. “Our proposal is to put the laws on hold for a full year-and-a half or even more till a solution is found.”

Tomar added that if farmers were to accept the proposal in principle, then it would begin work on setting up the committee and its modalities, saying the laws would be suspended so that a committee could find a settlement.

“The farm unions have closed the option of any possibility of amendments. They want status quo. That is why they have showed no flexibility in dealing with the government,” said Abhinav Saikia, an agronomist with farm startup IndAgro.

There are some other farm unions that are in support of the new laws.

“The government seems to have conceded a lot of ground with several proposals it has made so far, from diluting the laws’ provisions to putting them on hold, but the latest stand of farmers have brought matters to a standstill. We don’t want a repeal,” said Anil Bijoria, the leader of Haryana Farmers’ Producer Association, a pro-reform farm organisation.

“The government has said that farmers can ask for anything other than repeal. The government now has to decide between repealing the laws or see a more intense agitation,” said RS Mani, a retired faculty at the Tamil Nadu Agricultural University.