Forces lured into a ‘U-shaped’ attack in Chhattisgarh

In a “U-shaped ambush”, there is only one escape route which is also the entry point, an official explained.
READ FULL STORY
By Ritesh Mishra, Raipur

Maoists carried out a “U-type” ambush in Chhattisgarh’s Bijapur district after luring security personnel into a trap with the input of the possible presence of a top Maoist commander, officials familiar with the matter said on Sunday.

Also Read | Up to 20 Maoists killed in gunbattle: Officials

The Maoist operation was led by commander of battalion number-1 Madvi Hidma — forces have been looking for him for years — who gathered at least 300 armed cadres in a fortnight and vacated the three villages that were the site of the gunfight, officials aware of the details of the encounter said, adding that Hidma was trying to lure the forces into the Terrem jungle area for 17 days.

“The security personnel were caught unawares and were at a disadvantageous position. The Maoists planned a U-type ambush. At a particular area, there were hills on two sides and when Maoists started firing, the security forces tried to return. The Maoists encircled them,” said one of the officials quoted above.

In a “U-shaped ambush”, there is only one escape route which is also the entry point, an official explained. The Jeeragaon village is surrounded with hills on three sides and as soon as the security forces entered the villages, the rebels started firing at them, forcing the security personnel to run further ahead, and thereby getting trapped in a U-shaped encounter, the officer said.

Also Read | ‘He recently built a house...’: Kin of soldier who died in Chhattisgarh encounter

“Hidma called over 300 armed cadres from different parts of Bastar and they gathered close to the encounter spot,” a police officer said on condition of anonymity.

“His plan was to lure security forces but for 15 days the security forces did not reach the area. He was getting desperate because the arrangements of 350 people were costing a lot,” another official said.

Director general of the Central Reserve Police Force (CRPF), Kuldiep Singh, who is in Chhattisgarh to monitor the situation following the Maoist attack, however, said there was no intelligence or operational failure. 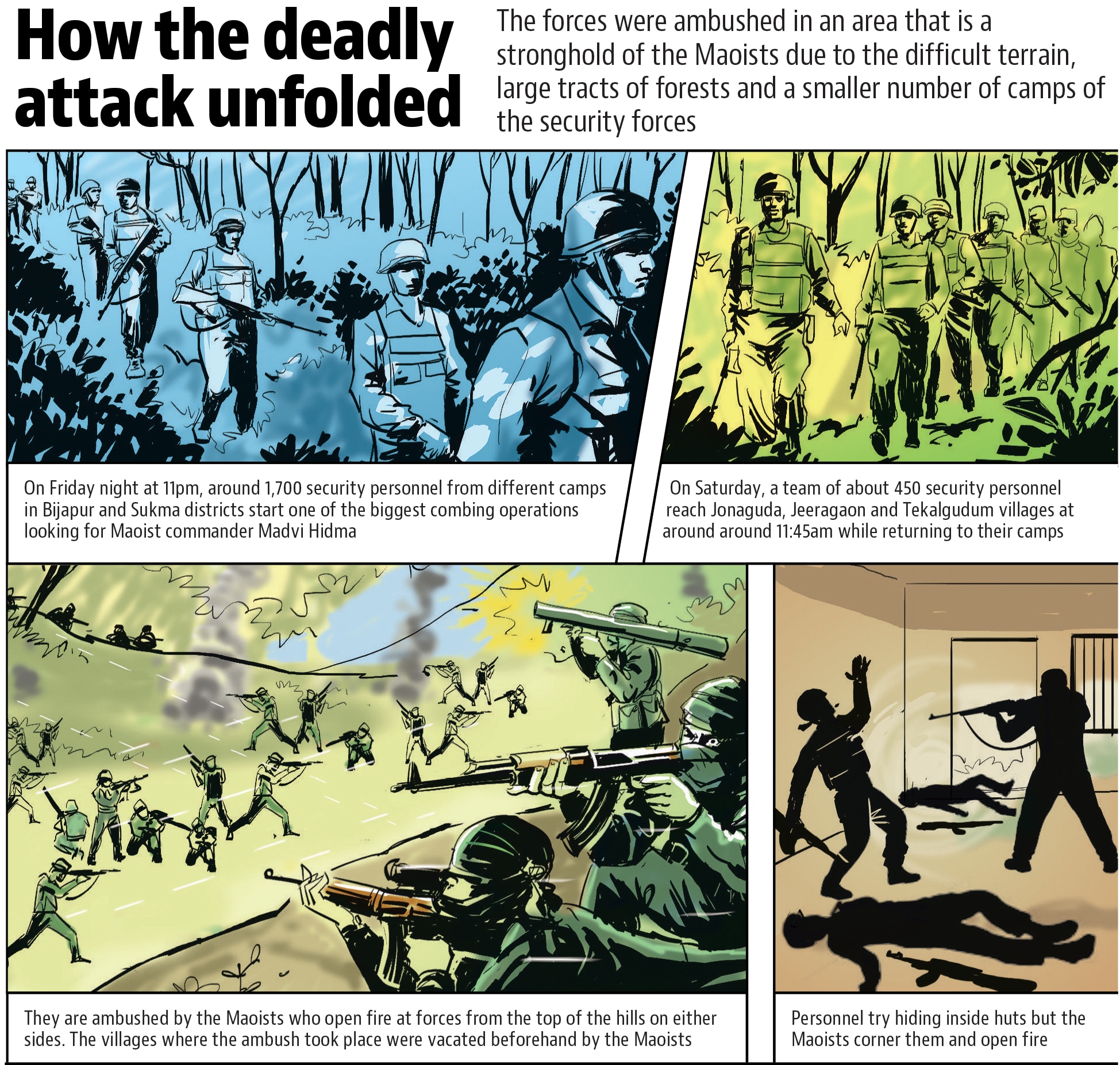 Following a specific input that Hidma was hiding in the area, the Chhattisgarh police decided to enter the forest as the elimination of the top commander would have been a major setback for the Maoist forces, officials said.

On Friday, at around 11pm, nearly 1,700 security personnel from different camps in Bijapur and Sukma districts began a combing operation.

The following morning, around 11.45am, a team of about 450 security personnel was returning to their camp through the Jonaguda , Jeeragaon and Tekalgudum villages when it was attacked, the officials said. The three villages were vacated by the Maoists prior to the attack.

The Maoists ambushed the forces in the area, which is a stronghold of the rebels due to difficult terrain, large tracts of forests and a smaller number of security forces’ camps.

A senior Chhattisgarh police officer, speaking on condition of anonymity, said that the forces “underestimated the efficiency of the Maoists”. “We had information about the Maoist strength but somewhere there was lack of strategic planning. We have also underestimated the efficiency of Maoists. It seems that they had practised everything earlier in the terrains,” the officer said.

A local intelligence officer said that the personnel tried to take refuge in the vacant huts in the villages. “But the Maoists tactically targeted the commanders of security forces who were leading the team,” the officer said, asking not to be named.

Another senior police officer said: “The reason behind high casualty was that the field commanders of security forces were targeted by Maoists. Bullet injuries to CRPF CoBRA and District Reserve Guard (DRG) field commanders led to disarray in command and control,” said the official.

One apparent reason for the attack was the Chhattisgarh police’s plan to set up a security camp in Silger village, near Terrem, another police officer said. The camp would have interrupted the Maoist corridor connecting Bijapur to Sukma and the rebels would have lost control over the core area, the officer said.

The attack has come amid the annual tactical counteroffensive campaign, from March to July, during which rebels carry out maximum attacks against security forces and attempt to increase their cadre strength.