The registration process opened at 4pm. According to the Co-WIN dashboard, there were roughly 1.2 million new registrations till 3pm. By 10pm, the total number of people who signed through the day shot up to over 12 million.
Share Via
Copy Link
ByRhythma Kaul, Deeksha Bhardwaj, New Delhi

A little over 10 million people signed up on the Co-WIN platform in roughly six hours after it began accepting registrations from those in the 18-44 age group on Wednesday, though these new signees are not likely to get coronavirus vaccines when they become eligible for the jabs on May 1 due to supply constraints.

The registration process opened at 4pm. According to the Co-WIN dashboard, there were roughly 1.2 million new registrations till 3pm. By 10pm, the total number of people who signed through the day shot up to over 12 million.

“[There were] no glitches. We registered 3.5 million people in one hour. We delivered 8.7 million SMSes in 1.5 hours,” said the chairman of the empowered group on vaccination, RS Sharma.

Some people reported being unable to access the website immediately after 4pm, and an official, who asked not to be named, said there was an outage for half an hour before the platform was up and functional again. 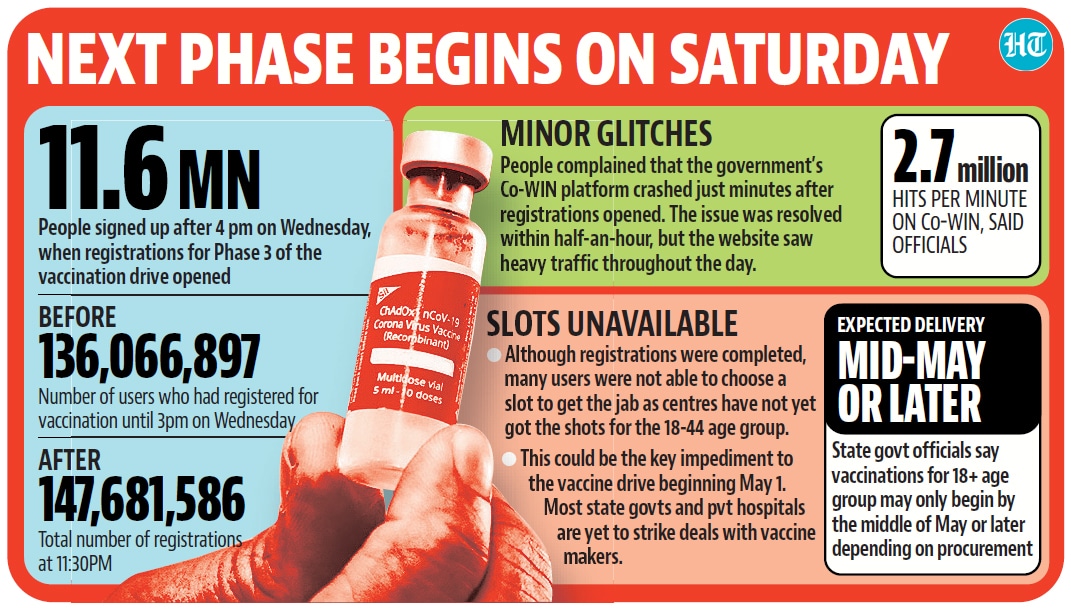 “People are now receiving OTPs within two to three seconds,” the official said, asking not to be named. “Initially, the load always increases. More people than one can account for turn up. But then it settles down. This is not unusual.” The official said that at one point the service was receiving 2.7 million hits per minute.

Some people soon after signing up began posting screenshots on social media of the service not allowing anyone under 45 to select an appointment.

A government official said this was because vaccination sites were mostly available at present for people over 45 years of age who continue to be part of the campaign for which doses are being distributed by the Union government. Doses for those under 45 are meant to be acquired directly by state governments or private hospitals, which is yet to happen.

“The rest are in the process of negotiating prices and checking vaccine availability. The drive starts from May 1, people should soon be able to book appointments as well,” this person added.

But officials across several states and in private hospitals said they have little idea about when they will be able to restart vaccinations. “We haven’t really been given a free hand though the government is also allowing private hospitals to procure. First priority is the Centre, then it is the states, and then private,” said Shobana Kamineni, executive vice-chairperson at Apollo Hospitals.

Kamineni added that the vaccine manufacturers Apollo Hospitals reached out to said they had other commitments to fulfil first. “They have very clearly said that we’re not the priority. We can only open it when we have vaccines,” the executive said.

A senior expert in the government admitted there could be a shortage of doses. “For conducting the initial two phases of national Covid-19 immunisation, the supplies seemed adequate, which is why the government also began exporting vaccine doses to help other countries. However, with the sudden surge in cases, and the government deciding to open up vaccination for all adults as a way of controlling the spread, the current production capacity looks inadequate. There is a need to quickly ramp up production and approve other vaccines such as Johnson & Johnson that already has applied for approval,” said a senior epidemiologist with the government, on condition of anonymity.

As per SII chief executive officer Adar Poonawalla, the company has a production capacity of about 60-70 million Covishield doses per month, and Bharat Biotech currently produces about 10 million doses of Covaxin in a month.

As on Tuesday, of 16 states where HT reporters reached out to officials for details on direct vaccine supplies, only three – Odisha, Madhya Pradesh and Assam – said they expected at least some of the doses to arrive by the first week of next month. Most others said they expected deliveries only after mid-May.

Maharashtra, which was the first to seek deliveries from SII and Bharat Biotech, said it expects 100,000 doses of Covaxin and 10 million doses of Covishield in May. At the same time, several states have said that they were yet to hear back from either of the companies on order queries.

To combat the sudden surge in Covid-19 cases, the government expanded free vaccination coverage to all 45 years of age and above on April 1. The first phase of Covid-19 vaccination began on January 16 with all health care workers, which was later expanded to all frontline workers on February 2.

Apart from halting vaccine exports for the time being, the government also has been encouraging vaccine producers to scale up. It is assisting Bharat Biotech in scaling up capacity from the current 10 million doses to about 20 million by June.

SII also announced that it was working towards ramping up the production capacity to nearly 100 million doses a month.

The Centre has made it clear that free vaccine doses are meant only for those above the age of 45, who are seen to be more at risk of severe disease or death with Covid-19. Vaccine makers will need to supply in a 50-50 ratio, with half going to the Centre, which will pass it on to states for the 45-plus vaccination in a formula it is yet to announce, and the rest directly to states and private hospitals.

Experts said it is imperative for the vaccine drive to cover as much ground as quickly as possible. “It is important that the speed of vaccination be ramped up,to ensure we don’t see the kind of spread that we are seeing in the current wave,” said Dr Giridhara R Babu, head, epidemiology, Indian Institute of Public Health.