What has driven India’s poverty reduction?

55 % Indians were classified as poor by the MPI methodology in 2005-06. India halved its poverty rate in the next 10 years. In absolute terms, the number of poor fell from 630 million to 360 million during this period.
Share Via
Copy Link
Hindutsan Times, New Delhi | ByArjun Srinivas

Improved nutrition, better sanitation and increased asset ownership have halved India’s poverty rate between 2005-06 and 2015-16, according to a study by the Oxford University.

In the 10-year period, 270 million Indians were pulled out of poverty in what is perhaps one of the most significant wins of the Indian economic story. In this period, per capita GDP grew from ₹38,750 to ₹88,746, and India became a lower middle-income economy.

Poverty statistics are notoriously controversial. It is very difficult to evolve a consensus around them. Poverty ratio varies significantly, depending on what the cut-off is for classifying the poor from non-poor. They also come with a significant time lag. India’s official poverty estimates are not available after 2011-12. There are credible alternatives to track absolute and relative, vis-à-vis other countries, progress in India’s battle against poverty.

One such measure has been developed by the Oxford University-based Oxford Poverty and Human Development Initiative (OPHI), which release something called Multi-Dimensional Poverty Index (MPI) for 105 nations.

The MPI is a more holistic measure because it considers dimensions of health, education and living standards and its India results are based on the findings of the National Family and Health Survey (NFHS).

People are designated poor according to the MPI, if they are deprived in at least one of the 10 indicators across the dimensions of education, health and living standards.

Fifty-five% Indians were classified as poor by the MPI methodology in 2005-06. India halved its poverty rate in the next 10 years. In absolute terms, the number of poor fell from 630 million to 360 million during this period. The decrease in poverty headcount has been driven mostly by an improvement in living standards, through better availability of material goods such as cooking fuel, sanitation facilities, and household assets.

More significantly, improved nutrition, has also contributed to the reduction in poverty. India’s rapid strides in fighting poverty have made it the country with the lowest poverty ratio in the sub-continent. Sri Lanka is most likely ahead of India. While comparable data for Sri Lanka is not available in the latest MPI database, the 2010 numbers show that only Sri Lanka has a poverty rate of only 5%, a stark outlier among the South Asian countries. 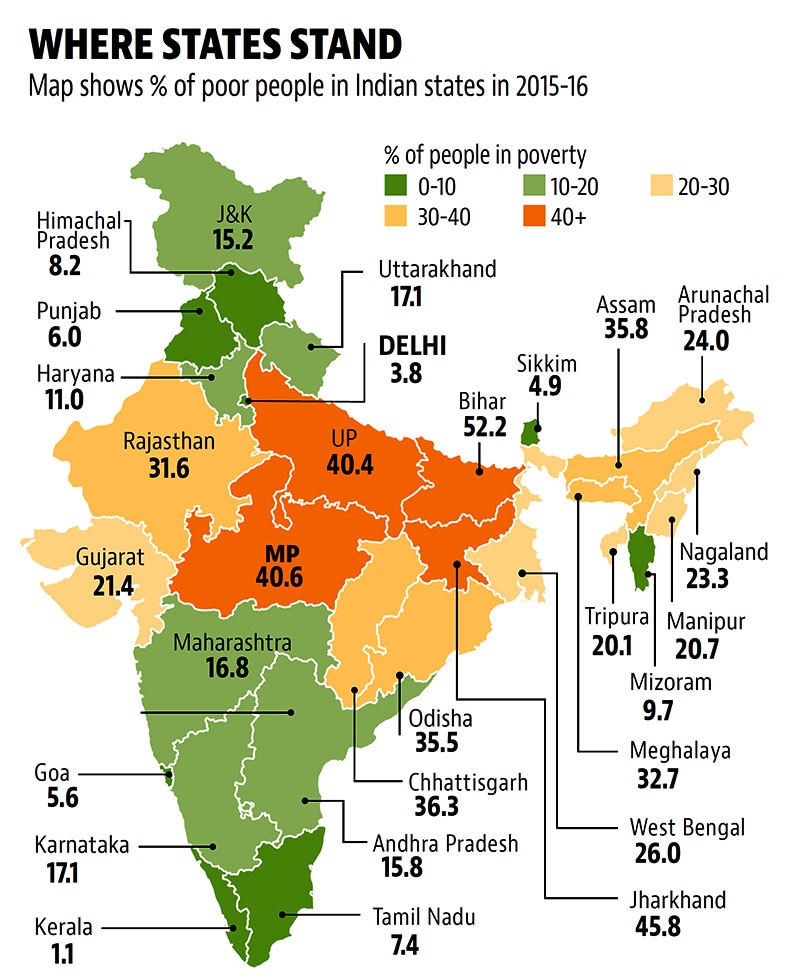 While 52.2 % of the population in Bihar is classified as poor in 2015-16, the corresponding proportion for Kerala is a minuscule 1.1%. While the number of poor has decreased across all states, what is striking is the rate of poverty reduction is greatest for the states that already have a lower poverty to begin with. Kerala showed a relative annualised decrease in poverty headcount of 22.2% between 2005-06 and 2015-16, highest among all Indian states.

Reetika Khera, associate professor, economics, at IIM Ahmedabad, said that the states that have shown a greater commitment to investment in welfare schemes, such as Kerala, Tamil Nadu and Himachal Pradesh unsurprisingly have a higher rate of poverty reduction in this period. Although the reduction in poverty over the last decade is remarkable, there are some worrying trends. Over 34% of the population currently classified as poor are children, and childhood deprivation has adverse implications that will carry on to their adulthood.

Further, the data shows that the rate of poverty reduction is slower among the poorest states, which may result in exacerbated regional inequalities.