Why the new MSP approach may not make farmers happy

Finance minister Arun Jaitley, in his budget speech, said that Minimum Support Prices(MSP) for the 2018-19 rabi season have been announced with a 50% mark-up and the same principle would be followed for the next kharif (monsoon crop) season.

The Bharatiya Janata Party (BJP) promised assured returns of 50% over costs to farmers while campaigning for the 2014 Parliamentary elections.

The budget speech suggested that the promise has been fulfilled.

Finance minister Arun Jaitley, in his budget speech, said that Minimum Support Prices(MSP) for the 2018-19 rabi season have been announced with a 50% mark-up and the same principle would be followed for the next kharif (monsoon crop) season.

An analysis of agricultural costs and MSPs shows that unless the government changes its definition of costs, there is unlikely to be any radical change in fortunes of farmers due to the policy.

A comparison of MSPs for important rabi (winter) crops for the current year shows that they already provide 50% returns over a cost measure known as A2+FL.

If the same principle is applied for the next kharif season, as hinted in the finance minister’s speech, one could expect some upward revision in MSPs for important crops including paddy. 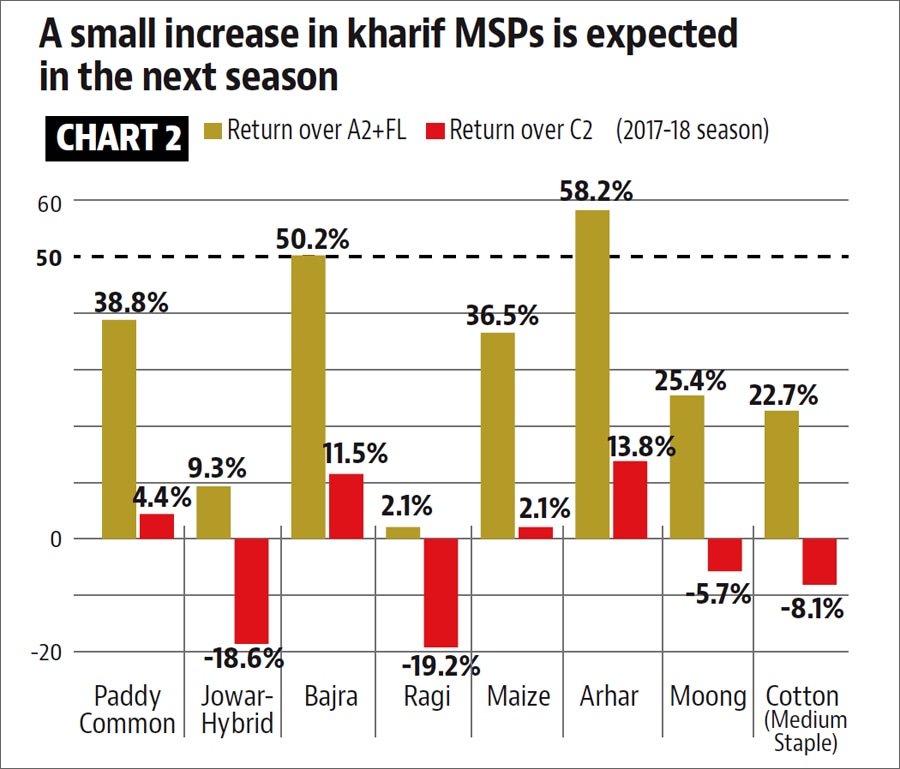 But it is unlikely that this will be enough to address the angst of farmers.

That’s because farmers, farm lobbies, even some analysts agree that A2+FL does not take into account the full costs incurred by the farmer.

Broadly speaking the A2+FL measure takes into account the following: value of agricultural inputs such as seeds and fertilizers; hired human, animal and machine labour; land revenue and irrigation charges; depreciation of farm implements and buildings; interest on working capital; rent paid for leased in land; and imputed value of family labour.

Selling off fixed capital assets and land can provide a substantial amount of capital to the farmer.

The so-called C2 measure of cost includes these components. Roughly speaking the A2+FL cost measure accounts for only variable costs of farming, while C2 also accounts for fixed costs.

It can be argued that even if the increase is based on A2 + FL costs, and is short of what farmers would have ideally wanted, it is an improvement over what was being offered earlier.

This claim is only partly true. Over the past three years, in the case of wheat, MSPs have always provided a mark-up of nearly 50% or more over the A2+FL cost. That will change now (perhaps for political reasons).

But farmers looking for what they see as a truer recognition of costs will be disappointed.