It was on March 24 that Prime Minister Narendra Modi announced a comprehensive nationwide lockdown beginning March 25. This lockdown, which lasted for 68 days, was among the most stringent in the world and virtually brought all non-essential economic activities to a halt.
READ FULL STORY
By Roshan Kishore

India’s first case of domestic transmission of Covid-19 was detected on March 2, 2020. This set the stage of restrictions on mobility to prevent infections from spreading. It was on March 24 that Prime Minister Narendra Modi announced a comprehensive nationwide lockdown beginning March 25. This lockdown, which lasted for 68 days, was among the most stringent in the world and virtually brought all non-essential economic activities to a halt. India’s GDP plunged by 24.4% in the first quarter (April-June) of 2020-21.

The economy has gradually recovered and come back in expansion zone in the third quarter (October-December) with a GDP growth of 0.4%. Almost all forecasts expect things to improve going forward. Does this mean the economy has overcome the pandemic’s disruption? Answering this question requires nuance, especially given the lack of crucial necessary empirical evidence. With this caveat in place, one can summarise the economic trajectory over the last one year.

Economic activity suffered a massive disruption, but was restored as lockdown restrictions were removed

Fear of the virus had started disrupting economic activity, especially in the service sector, even before the imposition of the lockdown. This increased significantly post-lockdown. Trends in India’s Purchasing Managers’ Indices (PMI) capture this clearly. PMI Services collapsed to just 5.4 in April 2020. A PMI value below 50 signifies contraction in economic activity compared to previous month. With gradual easing of lockdown-related restrictions, things started improving, but it was not until October 2020 that both the manufacturing and services PMI came back in expansion zone. Other high frequency indicators, such as the Nomura India Business Resumption Index (NIBRI) tell a similar story. NIBRI was reported to be at 99.3 – 100 being the pre-pandemic base – in the week ending February 21. 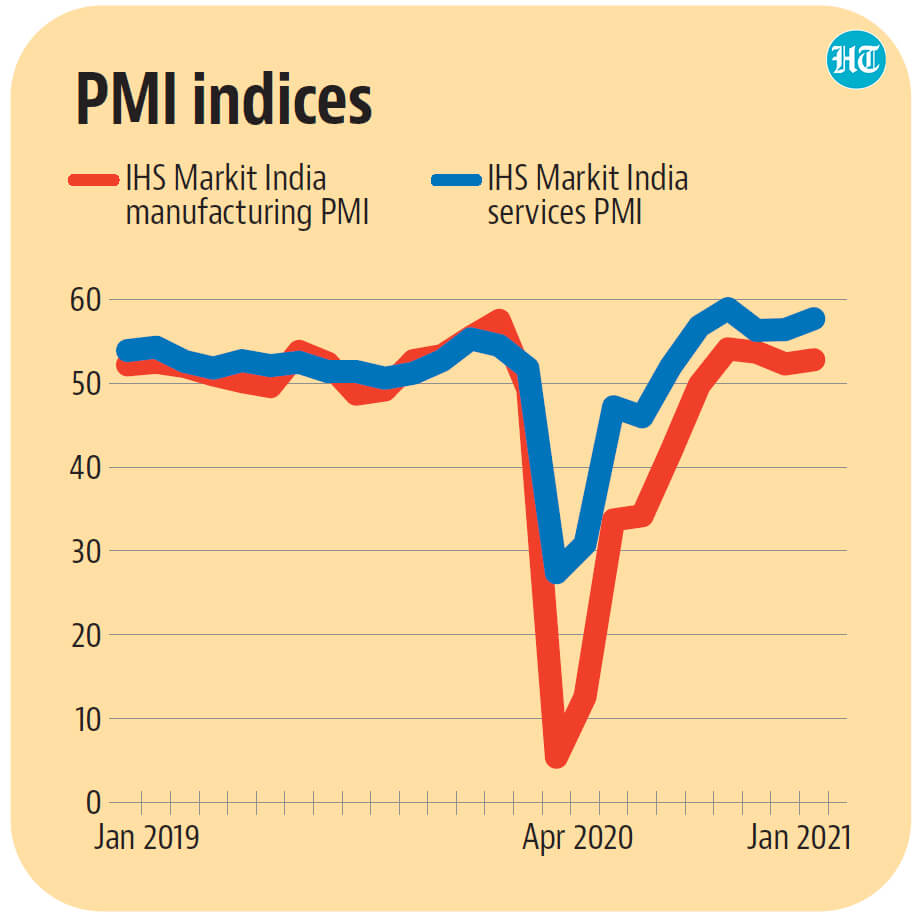 To be sure, this sequential recovery will not be enough to compensate for the pandemic’s loss in the current fiscal year. India’s GDP is expected to contract by 8% on an annual basis in 2020-21. This will not be the first GDP contraction in independent India, but it will be the largest ever. Also, this is the only time India will suffer an economic contraction entirely on account of developments in the non-farm economy. Agricultural gross value added (GVA) is expected to grow at 3%, and it has provided a timely cushion to the otherwise crisis-ridden economy. An international comparison of growth rates shows that India will be among the worst-affected economies by Covid-19, suffering the 8th largest contraction among the 30 countries for which IMF’s World Economic Outlook has given GDP growth rates.

Job markets, especially for blue collar workers, might still be in bad shape

Even the high frequency indicators, which portray a sequential recovery in the economy, have been warning that the employment has not recovered as fast as production. This is especially true for the blue-collar workforce, which did not have the option of working remotely during the lockdown. The sudden lockdown inflicted a huge shock to India’s migrant workforce, whose earnings are important drivers of consumption spending in some of India’s poorest and largest states. To be sure, not all of the headwinds to wages are because of the social-distancing restrictions. Earnings results show that companies have squeezed labour and other costs to maintain, even improve profits despite sales and revenues declining. That wages face headwinds in the economy can be seen from the fact that real rural wages have been contracting for four consecutive months beginning August 2020.

A prolonged squeeze on wages does not bode well for mass demand in the economy. 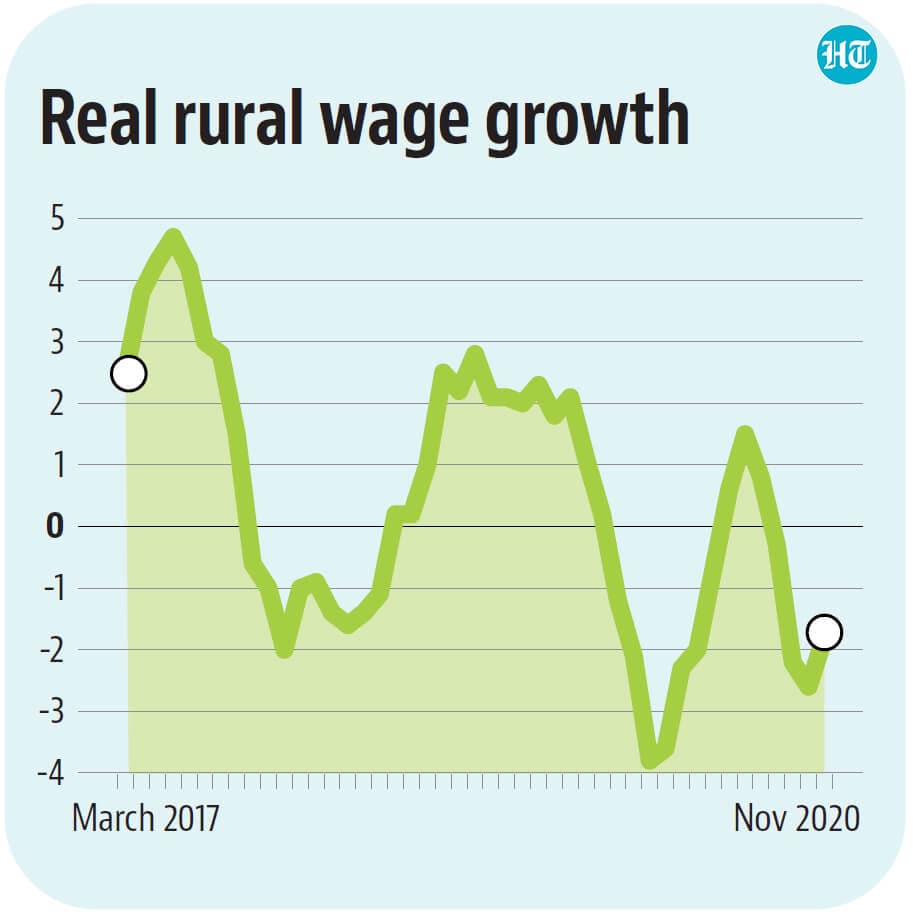 There are both bulls and bears in the economy right now

The Indian economy, a year after the pandemic struck it, is a polarised place. There are sections, especially among the well-off, which believe that the worst is over for the economy and the future promises unmitigated and perhaps even unprecedented growth. This can be seen in the current exuberance in the stock markets and euphoria around critical second-generation reforms and aggressive disinvestment proposals presented in this year’s Budget. The P-E multiple in BSE, which measures price of stocks to their earnings is at an all-time high, suggesting that it is future prospects rather than current earnings that are encouraging investors to put more money in the market. On the other hand, overall consumer sentiment, as measured by the RBI’s Consumer Confidence Survey, continues to be in the red. When read with the weakness in labour markets and shifting balance of power in favour of capital, this does not sound very surprising. Such a glaring mismatch between economic sentiments cannot go on forever, and one of these will have to converge with the other. We do not have enough empirical evidence to say what direction this alignment will eventually take.