Whether the BJP will be able to make up ground on India’s east coast will hinge on a few crucial factors. First, the BJP is unlikely to find a coalition ally in Andhra Pradesh before the 2019 polls. Second, the party must walk a fine line in Odisha and might have to bring the BJD on board as a post-election ally.

Following the BJP’s recent electoral losses in three Hindi heartland states, nearly all election experts expect that the BJP will struggle to equal its 2014 election performance, in which it bagged a majority of Lok Sabha seats. If the recent state elections are any guide, the BJP is set to lose a considerable clutch of seats in north and central India, which disproportionately powered its rise in 2014.

Five years ago, the BJP eviscerated opposition parties in the heartland. In Uttar Pradesh, the party’s alliance won 73 out of 80 seats. In Gujarat, Madhya Pradesh, and Rajasthan, the BJP won a combined 78 out of 80 seats on offer. Whether due to lacklustre job creation, rural economic anxiety, a newly collaborative opposition, or anti-incumbency sentiment, the number of BJP seats in this electorally crucial region will come down.

This means that the BJP is on the hunt for new seats it can pick up to offset the losses it will likely sustain in its core areas. Priority number one is making inroads along India’s eastern seaboard. Together, the five states on this seaboard—Andhra Pradesh, Odisha, Tamil Nadu, Telangana, and West Bengal—account for one-quarter of the Indian population and 144 of 543 parliamentary seats. In 2014, the BJP was virtually shut out along this corridor . Whether, and to what extent, the BJP is able to improve its performance on India’s eastern coast could make or break its 2019 chances.

Political scientist KK Kailash classifies Indian political parties as either polity-wide (national), regional, or “regionalist.” The BJP and the Congress Party each have a national footprint. Other parties, like the BSP, SP, and JD(U), are regional: while they may have national ambitions, they are only relevant in a particular geographic region. Kailash distinguishes these regional parties from “regionalist” parties, which expressly cater to the interests of their particular states. Regionalist parties mobilise voters by frequently appealing to their state’s regional pride, culture, language, and customs.

How the BJP fared in 2014 depended greatly on which type of party it faced. When the BJP and Congress were the top two finishers, the saffron party won 166 of 189 seats, or 88%. Against regional parties, the BJP had an even more impressive strike rate of 91%.

But the party only won one-third of head-to-head contests against regionalist opponents. 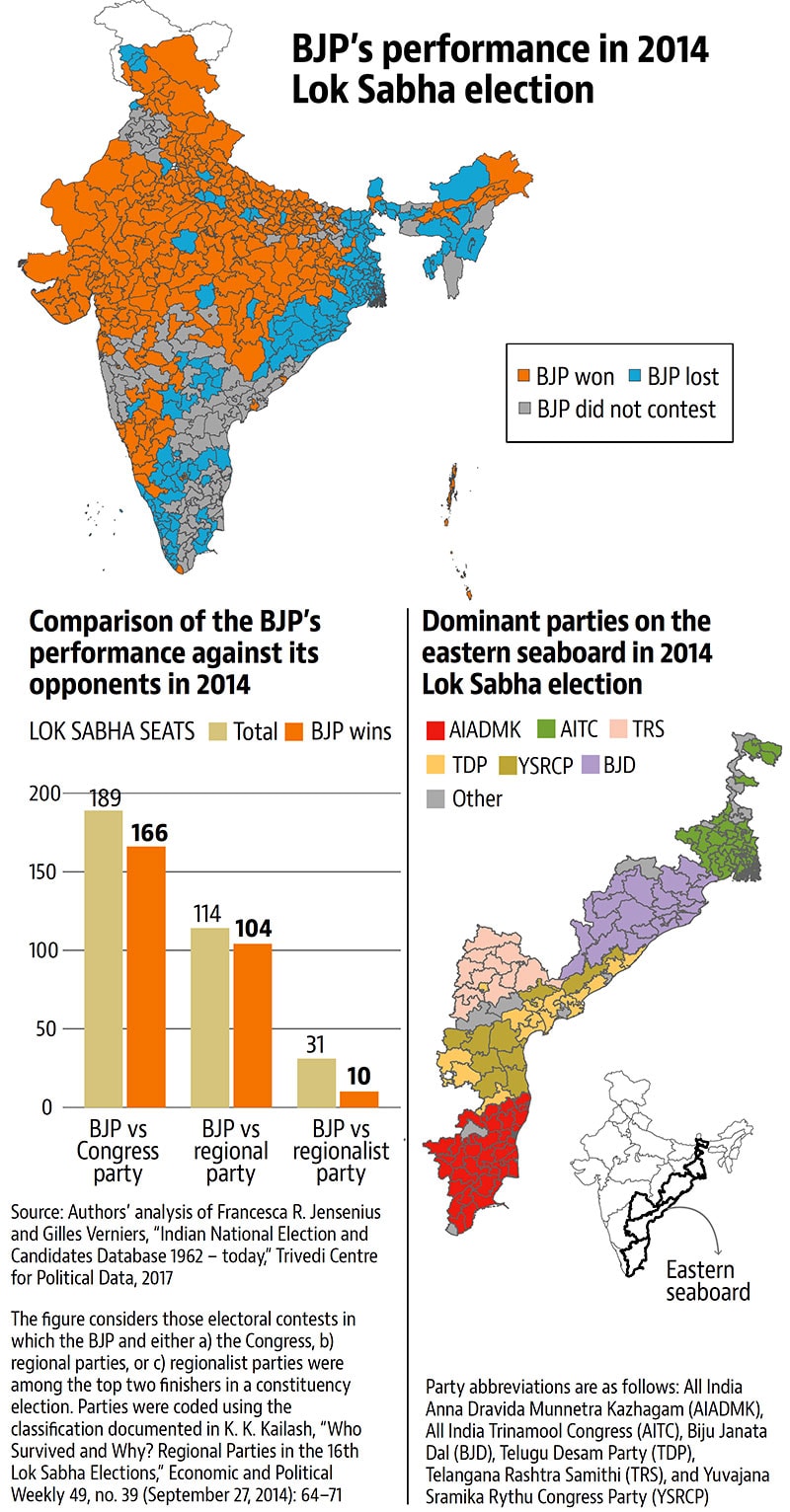 By and large, regionalist parties dominate politics in the eastern seaboard. The BJP, with a pan-Indian platform and a predominately northern Indian leadership and base, struggled to make much of a dent when facing these parties in 2014. All told, the BJP won just seven of the region’s 144 seats in 2014, up from one seat in 2009 and only tied with the party’s 2004 performance.

The BJP has typically done best on the eastern seaboard when working with local alliance partners. But electorally relevant parties have not always been willing to ally for the simple fact that their own brands might get tarnished in the process. In 2014, the BJP was able to leverage eventual Prime Minister Narendra Modi’s popularity to win over the TDP in Andhra Pradesh and the DMDK in Tamil Nadu. In Odisha, Telangana, and West Bengal, the party contested the election on its own.

As the 2019 elections approach, the BJP faces a mixed picture when it comes to improving its prospects on the eastern seaboard.

Odisha arguably represents the BJP’s best chance on the eastern coast. The BJD, led by chief minister Naveen Patnaik, has ruled in Odisha for 18 years. But the BJP is on track to eclipse the Congress as the principal opposition party in the state. The BJP won just one Lok Sabha seat in 2014, losing the remaining 20 to the BJD, but the party placed second in another nine seats concentrated in western Odisha.

In 2016, the BJP put in a very strong showing in Odisha’s local body elections, winning 297 of the state’s 849 Zilla Parishad seats up for contest and eight of 30 council chairperson positions — trailing only the BJD. The Congress finished a distant third.

As the race for 2019 heats up (the state will host simultaneous state and national elections), the BJP machinery has swung into action. It was no coincidence that Modi chose Cuttack to make a major address that kicked off his fourth year in office, in an attempt to enthuse the party’s local cadre. And, in November, a senior BJP functionary let slip that the party had chosen popular Union minister of petroleum and natural gas Dharmendra Pradhan, a member of parliament from Odisha, to face off with Patnaik as the BJP’s chief ministerial candidate in 2019.

After Odisha, the BJP thinks that West Bengal offers the next best opportunity for potential growth. While the Trinamool Congress, led by chief minister Mamata Banerjee, dominates the political space in West Bengal, the BJP is gaining ground against the Congress Party as well as the once-dominant Communists.

In the 2014 Lok Sabha elections, the BJP won almost 17% of the vote — nearly tripling its 2009 share . And, as with Odisha, the BJP made inroads in the local body elections held in mid-2018. While the party remained a distant second to the Trinamool — winning 22 Zilla Parishad seats to the latter’s 590 — it bagged more seats in each of the three levels of rural local government than did all other opposition parties combined (including independents).

Despite these hard-fought gains, the BJP’s march remains an uphill one: it lacks a prominent Bengali leader, possesses a relatively weak organisational base, and must come to grips with the fact that Muslims make up 27% of the state’s population.

But in both Odisha and West Bengal, the BJP’s objective is clear: project itself as the principal opposition and expand its steadily growing presence. In both states, it will go its own way as there are no plausible coalition allies with which it can join forces. In the remaining three states — Andhra Pradesh, Tamil Nadu, and Telangana — the BJP’s path forward is less clear.

In Andhra Pradesh, the alliance between the BJP and the ruling TDP — which helped lift the former’s performance in 2014 — collapsed in March 2018. The TDP pulled out of the BJP-led National Democratic Alliance after the central government refused to accede to the Andhra Pradesh government’s request for special status.

As a result, no Andhra party is likely to strike a pre-election agreement with the BJP, which has been branded as “anti-Andhra.” With this stigma, it is unlikely the BJP can pick up a sizable number of seats in the state.

The BJP was decisively trounced in Telangana’s December 2018 assembly elections. The state had been due to hold state elections concurrently with this spring’s Lok Sabha polls.

In an effort to delink his party’s electoral fortunes from a potential pro-Modi wave, K Chandrasekhar Rao, Telangana’s chief minister and the TRS party president, abruptly dissolved the state assembly and called early elections. The wily manoeuvre paid rich dividends: the TRS captured 88 of 119 seats on offer — an increase of 25 seats over its previous tally. The BJP, already a marginal player in the state with just five seats in the assembly, was nearly wiped out; it boasts just a single seat now.

Tamil Nadu is the hardest state to forecast as the current political situation is in flux. It is also the state where the BJP is arguably on its weakest footing.

The incumbent AIADMK has been in disarray since Jayalalithaa’s December 2016 death divided the party.

For now, the two party factions have put aside their differences (allegedly with the support of the BJP), but the cracks are plainly visible. The party must also contend with its rival, the DMK, which stands poised to fill the gap presented by the AIADMK’s fracture.

The BJP, for its part, hopes to exploit this power vacuum, but it would need allies given its limited reach: the party retains a lone parliamentary seat in Tamil Nadu and earned just 5% of the state’s vote share in 2014. The best it seems the party could hope for is a postelection alliance with the remnants of the AIADMK, as the DMK has been a regular Congress ally.

Whether the BJP will be able to make up ground on India’s east coast to compensate for losses it sustains in former strongholds will hinge on a few crucial factors.

First, while the BJP is unlikely to find a coalition ally in Andhra Pradesh before the 2019 polls, it could stitch together an alliance following the general election. At present, there are rumblings that the YSR Congress Party (YSRCP), which currently leads the opposition in the Andhra state assembly, would be open to a postelection alliance with the BJP. Both parties are opposed to the TDP, which recently left the NDA.

Furthermore, the leader of the YSRCP, Jaganmohan Reddy, might have incentive to curry favour with the Modi government because he faces federal corruption charges that the central government could ramp up or ramp down as it sees fit.

Second, the BJP must walk a fine line in the state of Odisha. Despite the fact that it is targeting BJD seats, the party also understands that it might have to bring the BJD on-board as a postelection ally. It is this delicate balance that explains why the BJP and BJD have seen a burst of cooperation, such as the latter’s decision to break from the opposition and support the BJP’s candidate for deputy chairman in the Rajya Sabha.

Because the BJD had previously been a part of the NDA, some within the BJP are optimistic that they can patch up old divisions. The catch is that this rapprochement is hard to envision if the two parties are waging bitter partisan battles in Odisha while cooperating in New Delhi.

Third, the BJP must find a way to make the 2019 elections a national referendum on Modi in some states but a state-by-state fight in others.

In states where the BJP and Congress are facing off or where regionalist parties hold less sway, the BJP stands to gain if it can make the election about Modi’s clean image, record of public service delivery, and strong leadership.

But in east coast states, where regionalist parties prevail, the BJP will have to contest elections on the basis of state-specific agendas. Getting this balance right will not be an easy task, and it is potentially an existential one. In 2019, the east coast could well be the gateway to the BJP’s second term in office.

Milan Vaishnav (@MilanV) and Jamie Hintson are with the Carnegie Endowment for International Peace. This article is part of the ‘India Elects 2019’ series, a collaboration between Carnegie and the Hindustan Times.

HT Samagam LIVE| ‘Making space in her own party’: Smriti Irani on Priyanka Gandhi in UP