The BJP has maintained its near dominance in the northern and western regions of the country. It has won all Lok Sabha seats in of Gujarat, Rajasthan, Delhi, Uttarakhand and Himachal Pradesh.
Share Via
Copy Link
Hindustan Times, New Delhi | ByHT Correspondent

Where did the BJP win and where did it lose?

The Bharatiya Janata Party (BJP) has improved its seat tally of 282 in 2014 to 303 (wins and leads as of 10pm) in 2019. The BJP has maintained its near dominance in the northern and western regions of the country. It has won all Lok Sabha seats in of Gujarat, Rajasthan, Delhi, Uttarakhand and Himachal Pradesh. In Madhya Pradesh it has won 28 out of 29 seats. It has recovered from its big assembly election defeat in Chattisgarh. In Maharashtra, the BJP and its ally Shiv Sena has repeated their 2014 performance, winning 41 out of 48 seats. To be sure, it has suffered marginal losses in some states. The biggest of them is Uttar Pradesh, where the party’s tally has come down from 71 to 62 between 2014 and 2019. The BJP has lost two seats in Andhra Pradesh, and a seat each in Tamil Nadu and Chhattisgarh. In some states such as Bihar and Jharkhand, the BJP contested fewer seats than it had in 2014 to accommodate its alliance partners. The NDA’s overall tally is either the same or higher in these states. These losses have been more than compensated by the party’s gains in the states such as West Bengal, Karnataka and Odisha, where the party has registered big gains.

Also Read | Lok Sabha elections 2019: What the next 5 years hold for key leaders

Has there been a large increase in BJP’s vote share?

Even though the BJP achieved a Lok Sabha majority on its own in the 2014 elections, its vote share of 31% was not something extraordinary. The Congress failed to get past the halfway mark in the Lok Sabha despite managing a vote share higher than what the BJP had in 2014 in 1989 (39.5%) and 1991 (36.4%) elections.

It is the BJP’s increased vote share which has led to the vote share of the non-Congress non-BJP parties reaching an all time low in these elections. This underlines the rise of the BJP has the dominant political force in the country. 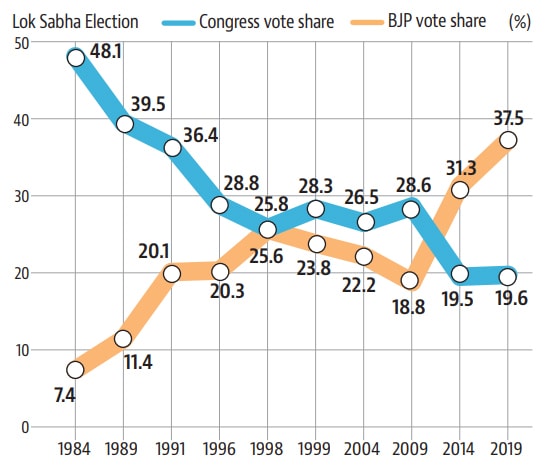 The BJP’s median victory margin in the 2014 elections was 16.6% of the total votes polled. This has increased to 19.5% in 2019. The BJP has also increased its victory margin compared to 2014 for seats in the top quartile.

Three out of the top five seats by the BJP’s victory margin (in terms of percentage of votes polled), Navsari, Surat and Vadodara are in Gujarat. The other two, Karnal and Faridabad, are in Haryana.

There are 11 seats which the BJP has won by a margin of less than 1% of the total votes polled.

In 42 seats, the BJP’s victory margin is less than 5% of the total votes polled. Fourteen out these are in Uttar Pradesh, where the BJP was pitted against the grand alliance of Samajwadi Party, Bahujan Samaj Party and the Rashtriya Lok Dal. 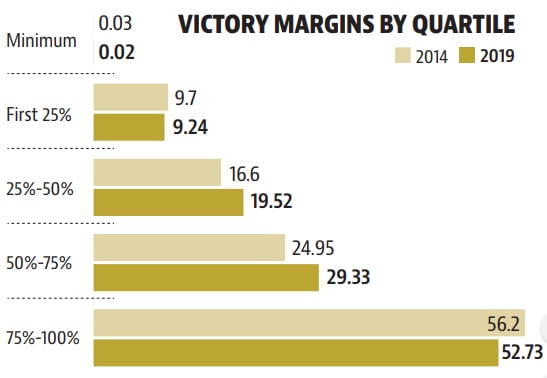 Did the BJP succeed in eastward expansion?

West Bengal and Odisha were key strategic goals for the BJP in the 2019 elections. The BJP’s growth in these states before 2019 had been at the cost of the existing opposition parties, Congress in Odisha and the Left in West Bengal in these states. The BJP has successfully achieved its goals in both these states, by significantly increasing its vote share and seat share.

Also Read | ‘BJP’s successes because of greats like him’, says PM Modi after meeting LK Advani

In West Bengal, the BJP has actually increased its vote share by more than 20 percentage points between 2014 and 2019. This is a big boost for the party before the next assembly elections in the state scheduled for 2021. The collapse of the CPI (M) led Left Front and shift of its votes towards the BJP has been an important factor behind the BJP’s growth in West Bengal.

The Biju Janata Dal has managed to avoid the fate of the All India Trinammol Congress in West Bengal by ensuring a bigger lead both in terms of seat share and vote share. It remains to be seen if Naveen Patnaik extends support to the Narendra Modi government at the Centre after the BJP’s advances in the sate 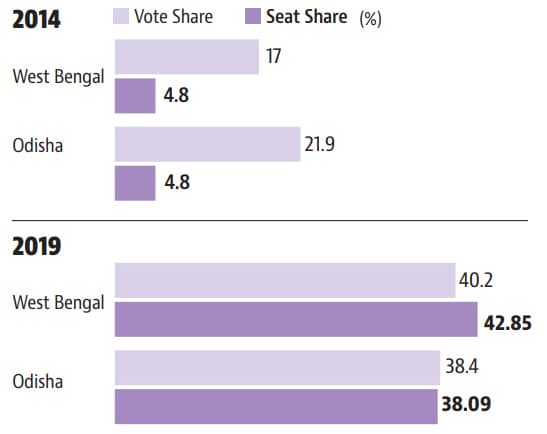 Is it just the Congress’s or every party’s decimation?

In 2014, the BJP’s rise came at the biggest cost for the Congress, which recorded its lowest ever tally of 44 seats. The Congress has not been able to make a significant recovery from its 2014 reverses. While its vote share is similar to the 2014 level, it has increased its seat tally by eight.

The BJP’s 2019 victory has significantly hurt at least three major regional players, namely the All India Trinamool Congress in West Bengal, Rashtirya Janata Dal in Bihar and the Biju Janata Dal in Odisha. The BJP has also managed to make a significant dent in Telangana at the cost of the Telangana Rashtra Samithi, which swept the assembly elections last year. Not all regional parties have been hurt by the BJP’s growth though. For example, the Dravidra Munnetra Kazhagam-led alliance has swept Tamil Nadu against the National Democratic Alliance.

At the all-India level, the 2019 elections mark a major shift in terms of vote share of non-BJP non-Congress parties. This value has reached 43%, lowest ever in all elections held after 1984, when the BJP contested its first elections. 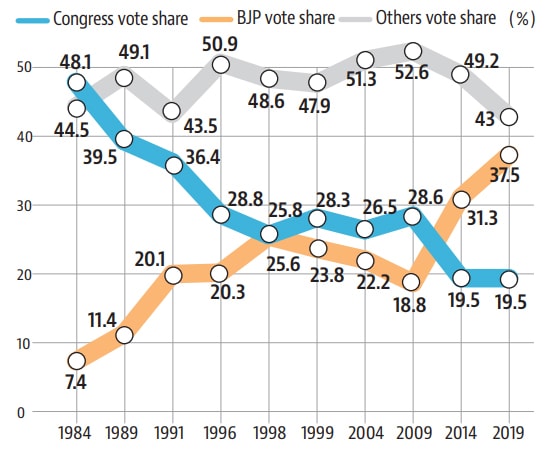 2018 was not a good year for the BJP’s political fortunes. It failed to form a government in Karnataka despite being the single largest party. The party failed to secure a majority in the assembly despite being invited by the governor first. The election results also led to a post-poll alliance between the Congress and the Janata Dal (Secular), which continued in the 2019 Lok Sabha. Towards the end of 2018, the BJP lost elections to the Congress in the Hindi belt states of Rajasthan, Madhya Pradesh and Karnataka. The BJP had achieved big victories in these states before the 2014 Lok Sabha elections. These victories had boosted the BJP’s perceived winnability in the 2014 elections. These developments created an impression that the BJP was vulnerable to reverses in 2019. None of this happened.

The BJP replicated its overall 2014 tally of 62 seats in Rajasthan, Madhya Pradesh and Chhattisgarh, and actually added seven more to its 2014 tally of 17 in Karnataka despite an increase in Opposition unity. 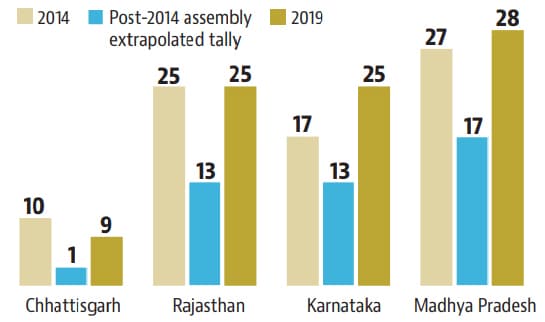 Did Oppn’s lack of coordination help the BJP?

The BJP was faced with a more united Opposition in many key states in the 2019 elections. A Samajwadi Party-Bahujan Samaj PartyRashtriya Lok Dal alliance in Uttar Pradesh; Congress and Janata Dal (Secular) alliance in Karnataka; Rashtriya Janata Dal, Congress, Rashtriya Lok Samata Party, Hindustan Awam Morcha, Vikassheel Insan Party alliance in Bihar; and Congress, Jharkhand Mukti Morcha, Jarkhand Vikas Manch and Rashtriya Janata Dal alliance in Jharkhand were some such examples. However, none of these alliances, many of which were formed just before the elections, were able to replicate or significantly increase their 2014 vote shares. This suggests that they could not convince their workers as well as voters to support each other’s candidates. The biggest beneficiary of this has been the BJP, which has been able to minimise its losses in Uttar Pradesh, improve its performance in Bihar and Karnataka, and maintain its showing in Jharkahnd. 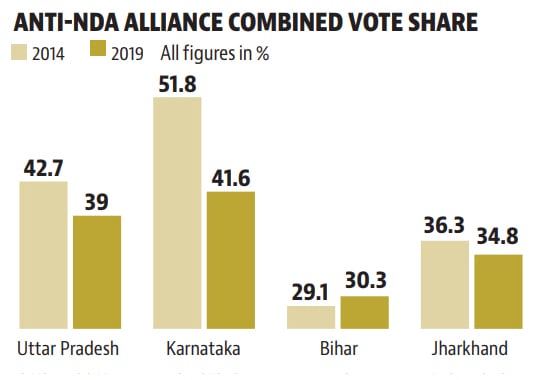 Did BJP’S allies play a bigger role this time?

In the 2014 elections, NDA partners added 54 seats to the BJP’s tally of 282. In the 2019 elections, the break-up of NDA’s overall tally is 303 to the BJP and 38 to its allies. This means the relative importance of BJP’s alliance partners has come down. But, in two key states, Maharashtra and Bihar, alliance partners played an important role in the BJP’s victory. The Shiv Sena has a vote share of 23.3% in Maharashtra, very close to the 27.6% of the BJP. The combined vote share of the two alliance partners is more than 50%, which explains how the NDA won 41 out of the 48 seats in the state. In Bihar, the BJP actually gave up five of its currently held seats to accommodate the Janata Dal (United), which had walked out of the NDA against Modi being declared the BJP’s candidate in the 2014 elections. The BJP suffered a huge defeat in the 2015 assembly elections after JD(U) joined hands with the Rashtriya Janata Dal and the Congress against the NDA. The combined vote share of the NDA has crossed 50% for the first time in Bihar. This suggests that even though the visible importance of BJP’s NDA allies has come down between 2014 and 2019, they have played a crucial role in ensuring the BJP’s return. 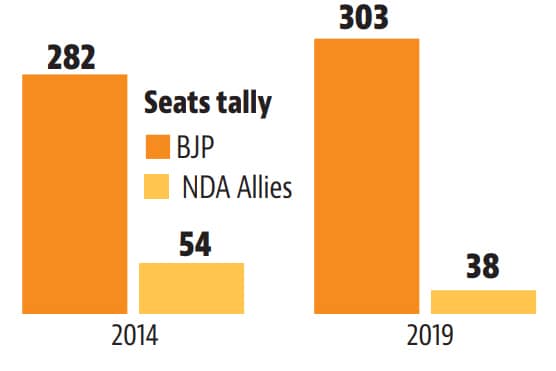 Did rural distress play a role in 2019 elections?

Rural distress had emerged as an important narrative against the Narendra Modi government. A sharp decline in food inflation, widespread farmers’ agitations, and a lower growth rate of agriculture and allied activities under the NDA 2 compared to UPA 2 had contributed to this narrative. That the BJP was vulnerable to rural distress was seen in the assembly elections in Gujarat, when the party performed relatively badly in rural areas. Emboldened by its improved performance in Gujarat, the Congress made farm loan waivers a big part of its 2018 campaign in the Hindi belt states of Rajasthan, Madhya Pradesh and Chhattisgarh. The BJP lost all these states to the Congress. The Narendra Modi government took corrective steps after these losses, the biggest of them being the announcement of PM-KISAN promising a direct income transfer of R6000 per year to farmers having less up to two hectares of land. The 2019 results show that the BJP has performed much better than the Congress in rural areas. The Congress, in fact, has performed much worse in seats with the highest share of rural population. 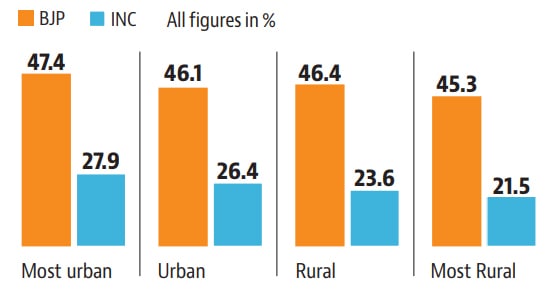 Did BJP suffer in seats dominated by farmers?

There is another measure to check whether agrarian distress created headwinds for the BJP in the 2019 elections. Not all rural voters draw their livelihood from agriculture. To check whether or not a parliamentary constituency (PC) has a higher share of farm dependent population, we have taken the share of cultivators and agricultural workers among main workers from the 2011 census data. This allows us to rank constituencies by the share of population which is actually dependent on agriculture.

A comparison of the BJP and Congress performance shows that the Congress has slightly more traction in PCs with highest share of farmers and agricultural workers than other PCs. To be sure, the BJP’s lead vis-à-vis the Congress is significantly higher in all PCs irrespective of the share of farmers.

It can be argued that the failure of the Congress to perform better in more rural and farmer dominated PCs need not be a negation of rural distress, as voters do not vote on one issue. However, the reverse argument that the electorate did not vote on the issue of farmer distress, is equally valid. 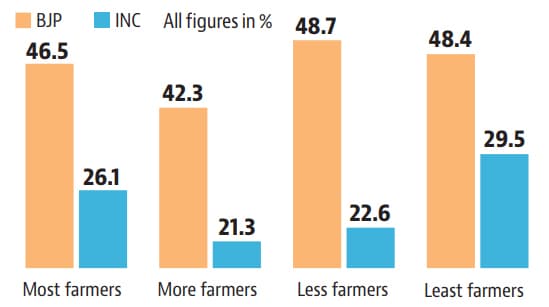