The main threats to tree species are forest clearance for various projects; other forms of habitat loss including exploitation for timber, medicine, etc; and the spread of invasive pests and diseases.

Around 18% of India’s tree species stare at the possibility of extinction, according to a new assessment published by the London-based Botanic Gardens Conservation International. India has 2,603 tree species, of which 650 are endemic or native to certain parts of the country; and 469 of them are threatened.

The Global Tree Assessment, which was undertaken over the past five years by 500 experts to compile extinction risk information for 58,497 tree species worldwide, found that 30% of tree species around the world are threatened with extinction. It also found that at least 142 tree species are already extinct in the wild. The report has warned of concerns related to ecosystem collapse globally due to increasing tree diversity loss and mass mortality of trees in certain regions.

The main threats to tree species are forest clearance for various projects; other forms of habitat loss including exploitation for timber, medicine, etc; and the spread of invasive pests and diseases. Climate crisis also has a measurable impact, the assessment warned.

In the Indo-Malaya region, which covers India, 41 tree species are extinct, the highest globally compared to other regions. Around 3,819 species are threatened and 1,068 species are near threatened, among 13,739 species in the region.

The largest number of tree species are in the Neotropics (Central and South America , 23,631 tree species), followed by Indo-Malaya (tropical Asia , 13,739 species) and the Afrotropics (Africa south of the Sahara, including Madagascar, 9,237 species).

Some of the most commonly known species in the country are nearing extinction. For example, Agarwood trees in India produce a resin used in perfumes, incense and medicines, and the huge demand for this has led to populations of eight Aquilaria and 15 Gonystylus species declining to a point at which they are now categorised as threatened by the International Union for Conservation of Nature (IUCN) Red List.

Several Eucalyptus species in Australia are threatened; Diospyros egrettarum, endemic to Mauritius is critically endangered, threatened by an invasive exotic plant species; Madagascan species of Diospyros and Dalbergia have been severely exploited to supply the Chinese market as have Dalbergia species from Central America, the report has flagged.

The world is facing a biodiversity crisis and around a million animal and plant species are estimated to be threatened with extinction as per evaluations by Intergovernmental Science-Policy Platform on Biodiversity and Ecosystem Services in 2019.

“Trees are highly visible in most landscapes and are excellent biodiversity indicators. Concern about ecosystem collapse is increasing, owing to growing recognition that the process can be very abrupt, as illustrated by the bleaching and death of large parts of the Great Barrier Reef in 2016/17,” the report said. 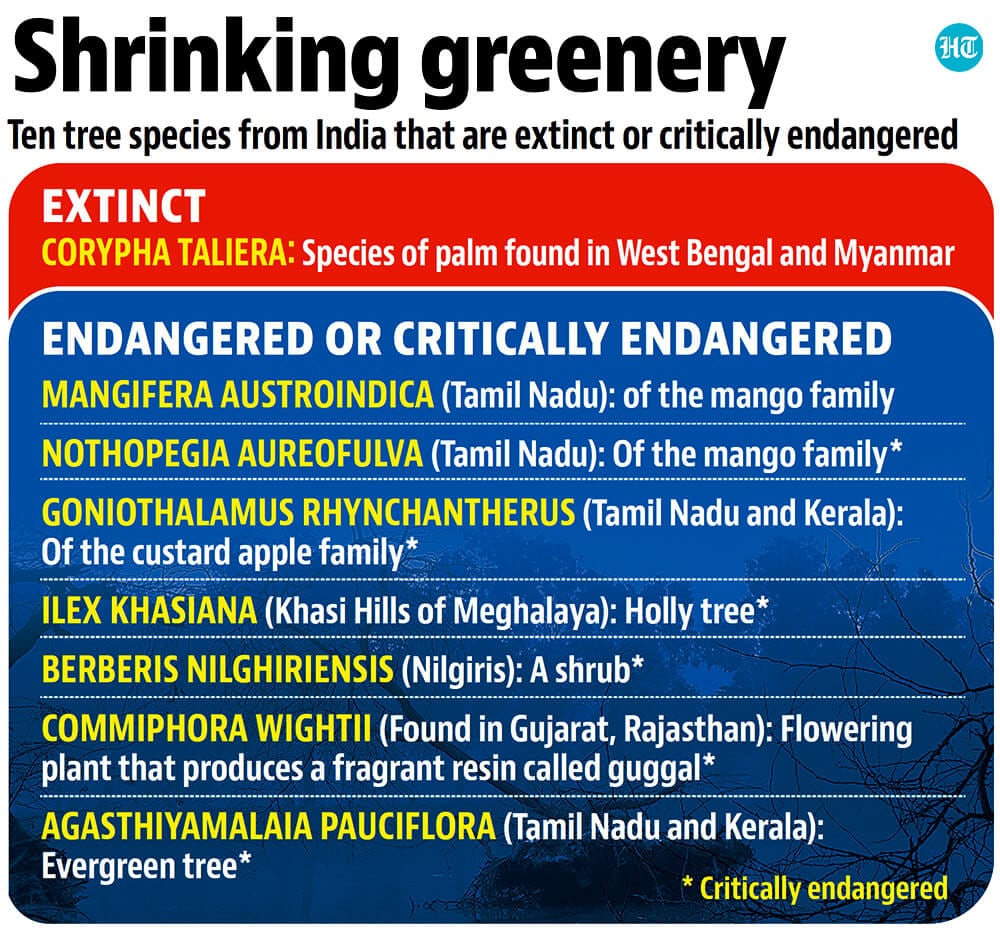 There has been a series of major, large-scale disturbance events, such as the unprecedented fires in California, southern Australia, Indonesia and the Amazon in recent years. At the same time, large areas of forest are undergoing mass mortality events because of other factors, including drought and heat stress and the increased incidence of pests and diseases. Large-scale tree mortality is occurring in many different parts of the world, including the severe loss of the endangered Atlas cedar from Morocco potentially leading to ecosystem collapse, the report added.

“The rapid decline of dominant tree species currently evaluated as of ‘Least Concern’ may also trigger ecosystem collapse in wide areas as with the mortality of Pinus tabuliformis across 0.5 million ha in east central China, and extensive mortality of Nothofagus dombeyi in Patagonian South America. Many of the best-documented examples are from North America, including death of >1 million ha of multiple spruce species in Alaska, >10 million ha of Pinus contorta in British Columbia, 1 million ha of Populus tremuloides in Saskatchewan and Alberta, and >1 million ha of Pinus edulis in the southwestern US,” writes Adrian Newton, Bournemouth University and contributor to the report.

Unlike species extinction, ecosystems that have collapsed do not disappear, but transition into some other type of ecosystem due to anthropogenic pressures and stress. “Wherever trees occur they support a wide range of other species from their position at the base of trophic pyramids in ecological networks. For example, 2,300 species are associated with native oak trees in the UK. If species at the base of trophic pyramids become extinct this might lead to an extinction cascade leading potentially to ecosystem collapse,” the report said. Entire communities of trees, and other associated species, can be threatened simultaneously.

The fallout in India

Indian experts point to measures taken to protect biodiversity but are concerned too.

Bivash Pandav, director of Bombay Natural History Society, said, “India has a very well-established network of Protected Areas (PAs) that encompass nearly 5% of its land mass. These PAs that are backed by strong legislations are the hot spots of biodiversity in the country. Besides, community owned lands in large parts of Nortradt India are also major sources of biodiversity. Legislations such as Forest Conservation Act, Wildlife Protection Act and Biodiversity Act are majorly responsible for protecting India’s rich biodiversity.”