A new Instagram picture shared by Priyanka Chopra from a beach has got fans wondering if she’s on her honeymoon with husband Nick Jonas. See it here.

A new Instagram photo shared by actor Priyanka Chopra has got fans wondering that she’s already on her honeymoon with her singer husband Nick Jonas. Priyanka on Monday shared an Instagram story from a beach, on which the couple’s initials can be seen.

“NJ” and “PCJ” have been initialled on the sand, which stands for Nick Jonas and Priyanka Chopra Jonas, her new name - at least on Instagram. Priyanka added a heart and a kiss emoji to the picture. Both Nick and Priyanka shared the covers of the latest issue of Hello! magazine, which shows them at their Christian wedding ceremony. Priyanka and Nick have struck deals with several magazines for covering their lavish Jodhpur wedding, which took place over five days and featured two ceremonies - in accordance with Christian and Hindu traditions. 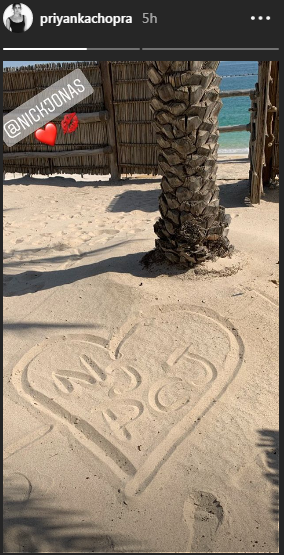 Finally my babies have gone for honeymoon

@priyankachopra @nickjonas Can't wait for you guys to have a well deserved honeymoon , you must be so tired 😭❤

In a recent interview to NDTV, Priyanka had admitted that she hadn’t decided where she’d go for her honeymoon. “I have no idea. Right now, I have just work commitments this whole month with shooting and doing a lot of work with Bumble and a few other ad commitments that I have. And I don’t know. We still haven’t figured out where. I think it’s going to be a surprise though. I think that’s what my husband’s planning.”

The last picture she shared from a beach was from her Goa vacation with family and Nick. With the pictures, she fuelled rumours that she was dating the American singer when she called him (and brother Siddharth) her ‘favourite men’.

The wedding was followed by a reception in New Delhi on December 4, which was attended by PM Narendra Modi. It is being reported that the couple will host another wedding reception, on December 20, for industry friends.

Nick on Monday commemorated their first week as a married couple with a picture of them cutting their famous 18-foot wedding cake. He captioned the image, “One week ago today.”

One week ago today ❤️ @priyankachopra

Priyanka, meanwhile, was recently named among the most powerful women in the world by Forbes magazine. She also created history by becoming the first Indian to be featured on the cover of Vogue America. Exclusive images from Priyanka and Nick’s wedding ceremonies were carried by Vogue and People magazine.

Priyanka will next be seen on the big screen in the tentatively titled The Sky is Pink. The film, directed by Shonali Bose and co-starring Zaira Wasim and Farhan Akhtar, was recently lapped up by international shingle Ivanhoe Pictures.

Priyanka and Nick have made several public appearances since their wedding. They were spotted in New Delhi, promoting a dating app which is endorsed by Priyanka and then were seen in Udaipur, at Isha Ambani and Anand Piramal’s pre-wedding celebrations.

INS Kavaratti to be commissioned today: All you need to know

IPL 2020: Bravo leaves message for CSK fans after being ruled out
Read more