Neetu Kapoor raises toast to Rishi Kapoor in one last post, says it’s ‘the end of our story’. See here

Neetu Kapoor has raised a toast to her husband, actor Rishi Kapoor, who died on Thursday after a two-year-long battle with leukaemia. Neetu shared the picture on Instagram, and captioned it, “End of our story.”

The picture shows Rishi, smiling at the camera, with a glass of whisky in his hand. The post has been ‘liked’ over 100000 times. Neetu’s daughter, Riddhima Kapoor Sahni, dropped heart emojis in the comments section, as did Karisma Kapoor, Bhavana Pandey and Shweta Bachchan Nanda.

End of our story ❤️❤️

“Yes please don’t say that, what’s so beautiful is that you had such an amazing love story and so many beautiful memories,” Sunita Kapoor wrote in the comments.

Riddhima, who lives in Delhi, couldn’t make it to her father’s funeral, but shared messages for him on social media. “Papa I love you I will always love you - RIP my strongest warrior I will miss you everyday I will miss your FaceTime calls everyday! I wish I could be there to say goodbye to you ! Until we meet again papa I love you - your Mushk forever,” she wrote. On Saturday, she wrote on Instagram stories alongside a picture of her father, “Legends live forever.” 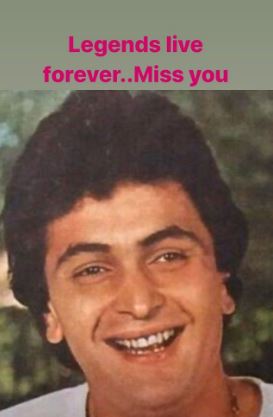 Pictures of the family, including Rishi’s son Ranbir, Rishi’s elder brother Randhir, Kareena Kapoor Khan, along with husband Saif Ali Khan and actor Abhishek Bachchan and Ranbir’s girlfriend Alia Bhatt and Anil Ambani were among the few present at the funeral.

Alia later wrote a post on Instagram, honouring the late actor. “What can I say. About this beautiful man... who brought soo much love and goodness into my life. Today, everyone speaks of the legend that is Rishi Kapoor... and though I’ve known him like that all my life... for the past two years I’ve known him as a friend, a fellow Chinese food lover, a total cinema lover, a fighter, a leader, a beautiful storyteller, an extremely passionate tweeter and a father! In these past two years the love I have received from him is like a warm hug that I will always cherish!” she wrote in her caption.