The first shock, similar to many other contraction phases, reflects a sharp reduction in investment and exports, leading to a drastic decline in output and employment. However, the second shock is unique to the pandemic and involves a drastic change in the pattern of aggregate demand due to the technological-cum-structural changes unleashed by the pandemic.
Share Via
Copy Link
Byhindustantimes.com

The Indian economy has been hit by two distinct shocks during the pandemic. The first shock, similar to many other contraction phases, reflects a sharp reduction in investment and exports, leading to a drastic decline in output and employment. However, the second shock is unique to the pandemic and involves a drastic change in the pattern of aggregate demand due to the technological-cum-structural changes unleashed by the pandemic. Such changes include a shift in expenditure against sectors which provide face-to-face services and are less amenable to remote work.

In India, these sectors typically provide a livelihood for lower-income workers. A contraction in demand for these sectors entails an additional squeeze on the incomes of the poorest. An effective counter-cylical strategy should keep both these challenges in mind. Whether or not the forthcoming budget can deliver on this depends on how the government deals with an impossible trinity.

1) What has been the nature of the fiscal response so far?

That India’s fiscal response to the pandemic’s economic disruption has been relatively muted is well known . While there is consensus on the need to increase it, the choice of the fiscal instrument is also an important factor due to two reasons. While any change in expenditure or receipts may affect the deficit ratio, the effect on output would be different due to different multiplier (the multiple by which change in government spending or taxes change overall incomes) values. Also, the income of different classes is affected differently depending on the nature of the instrument chosen.

Capital expenditure (KX) has a relatively strong positive impact on output due to a higher multiplier value. Non-capital primary expenditure (NKPX), such as employment guarantee schemes or food subsidies, directly compensates the income loss of the poorest. Concession in corporate tax may directly and positively affect corporate incomes. Latest data from the Controller General of Accounts (CGA) can be used to analyse the nature of the post-pandemic fiscal response of the central government. The fiscal deficit to gross domestic product (GDP) ratio up to November 2020 (using the 2020-21 advanced estimate figures) was 0.4 percentage points higher than the value in 2019-20.

With respect to the November 2019 figure, the November 2020 deficit ratio was 1.5 percentage points higher. A break-up of different components of the sources of fiscal deficit shows that while the KX, NKPX and interest payments (IP) are lower than what they were up to March 2020, corporation tax is a major source of a rise in the fiscal deficit. To be sure, a shortfall in other taxes (other non-debt receipts) has also shown an increase. The rise in cyclical component indicates the effect of lower GDP on the fiscal deficit ratio. 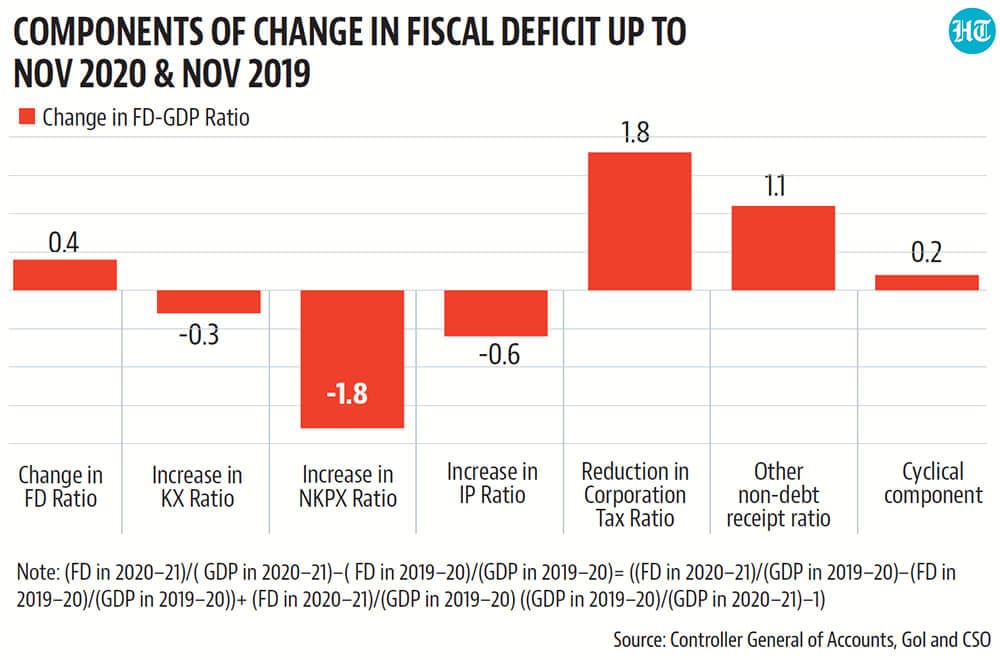 2) Declining share of Corporation Taxes is a long-term trend

The pandemic seems to have further accentuated this trend. CGA data up to November 2020 puts the corporation tax-GDP ratio at 0.9%, which is much lower than the previous year’s levels. Any attempt to compensate for the income loss of labour in general and bottom deciles in particular requires a drastic break from this trend. What would be needed in particular is a massive increase in non-capital primary expenditures along with capital expenditures. 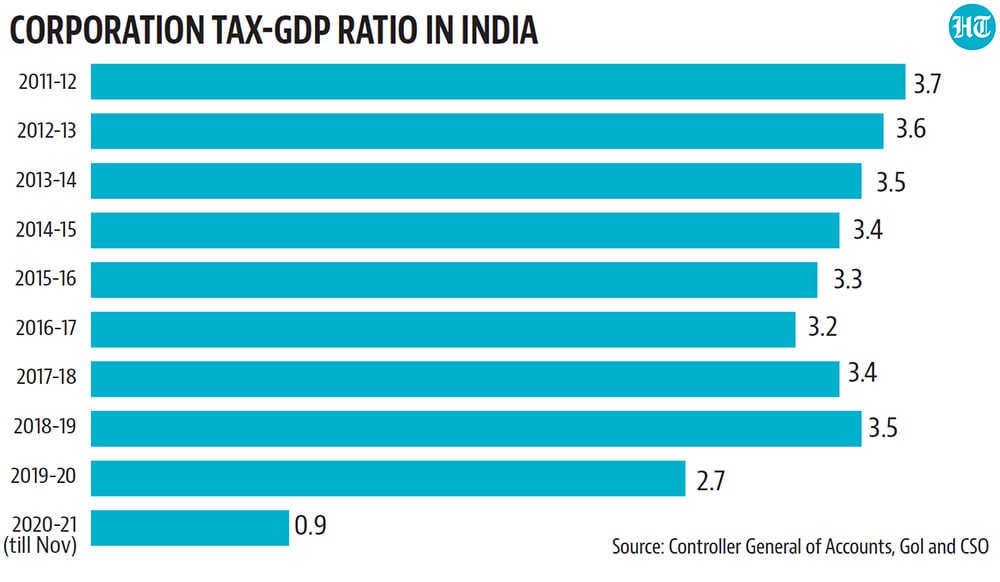 3) Will a big fiscal stimulus land India in a debt trap?

One central concern against increasing expenditures has been the issue of a high debt ratio and debt sustainability. How binding are these constraints? India is not the only country which has faced an economic shock due to the pandemic. A situation where all major economies are pushing the fiscal envelope through various avenues, including a rise in borrowings, is very different from one where India would have been the only country increasing its borrowings to boost the economy.

Debt-GDP ratio projections from the latest International Monetary Fund fiscal monitor (October 2020) show that the extent of change in the debt ratio during the pandemic has been more or less proportional to the initial level of debt ratios for G-20 countries. This indicates that the relative ranking of a country in terms of its debt-GDP ratio would be more or less similar in 2020-21 as it was in 2019-20. India is ranked ninth among G-20 countries in terms of the debt ratio for both these years. Given this fact, there is hardly any reason why the level of debt-GDP ratio should be an immediate constraint. 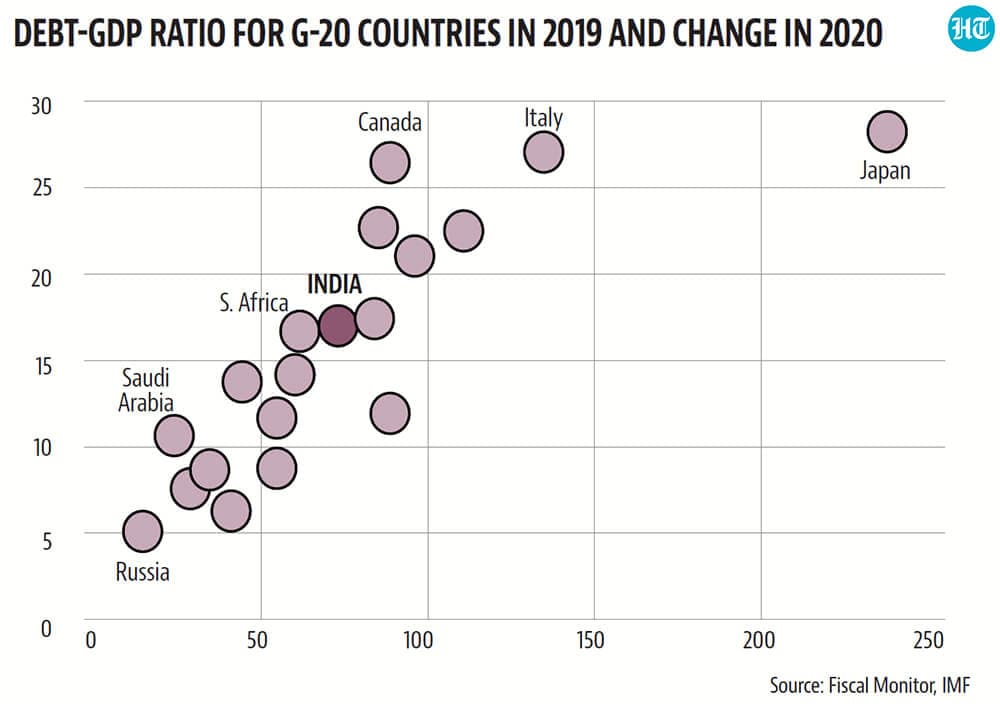 4) Nature of stimulus is also a determinant of future prudence

The issue of debt sustainability may pose a constraint for a developing country only if the debt-GDP ratio has the tendency to increase over time. There are at least two distinct ways in which any targeted level of non-capital primary expenditure, which is what is required to support the incomes of the poor, can be financed by keeping the debt-GDP ratio constant. The first is to finance additional expenditure completely through an additional corporation tax.

The second is to increase expenditure and deficit in a manner that the level of GDP increases in proportion to the increase in debt. This can be done if the stimulus is synced with expenditure items which have a sufficiently high multiplier. Estimates by the Reserve Bank of India show that increasing capital spending in particular has a large multiplier effect on overall incomes. An Azim Premji University working paper by this author used RBI’s estimations and argued that any targeted level of non-capital primary expenditure can be financed while keeping the debt-GDP ratio unchanged, if the capital and non-capital primary expenditures are increased in a specific proportion.

Based on these calculations, we provide an example of how one can finance non-capital primary expenditure worth ?17.9 lakh crore (inclding a pandemic-related fiscal support of ?3 lakh crore). If the corporate tax-GDP ratio is increased from the present level of 1% to 3% (lower than what it was earlier in the decade) in 2021-22 and an additional amount of ?2.9 lakh crore of capital expenditure is incurred, it would keep the debt-GDP ratio unchanged. Thus a total of ?8 lakh crore of additional primary expenditure can be financed over and above the 2020-21 level. 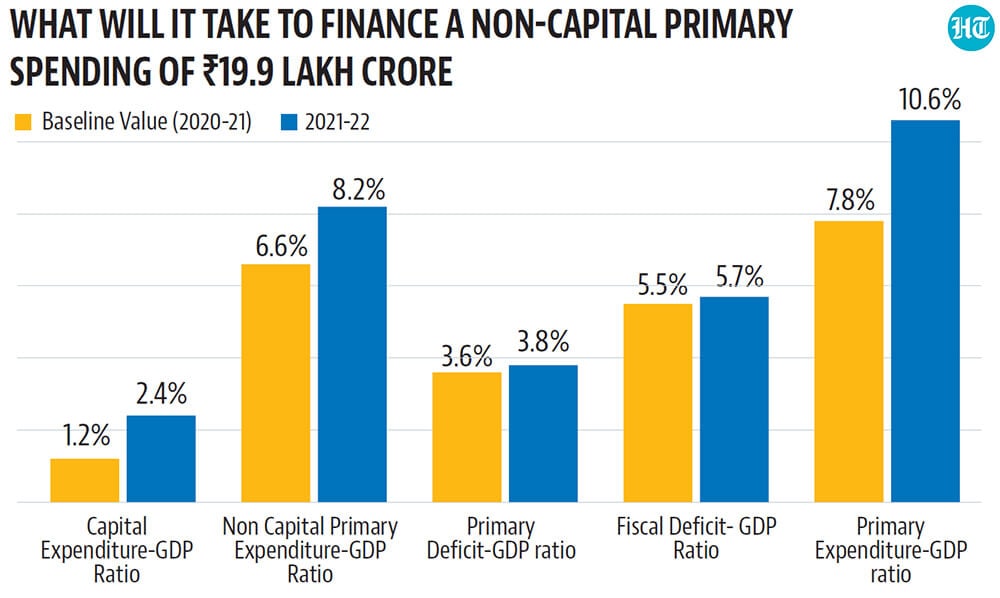 In short, debt-sustainability hardly appears to be a binding constraint for financing adequate amount of fiscal support. Rather, the impossible trinity facing the budget is continuing with corporate tax concessions, maintaining fiscal prudence and compensating income loss of the poorest. Its resolution involves a political choice, rather than an economic one.