Home / Business / Four years of GST: Success, or not quite?

Four years of GST: Success, or not quite?

GST, which subsumed almost all domestic indirect taxes (petroleum, alcoholic beverages and stamp duty are the major exceptions) under one head, is perhaps the biggest tax reform in the history of independent India.

July 1, 2021 marks the completion of four years since the roll-out of the Goods and Services Tax (GST). GST, which subsumed almost all domestic indirect taxes (petroleum, alcoholic beverages and stamp duty are the major exceptions) under one head, is perhaps the biggest tax reform in the history of independent India. The consensus on its reformist credentials notwithstanding, the policy took more than a decade of political back and forth to see light of the day. Four years after its implementation, it continues to face significant challenges.

The short answer is yes. A look at GST collection estimates in the Union Budget proves this. The Union Budget for 2018-19 (the first full year under GST) estimated receipts to the tune of ₹7.43 lakh crore. Actual collections were just 78% of this amount. While the shortfall between Budget Estimates (BE) and actual collections reduced significantly in 2019-20 (the latter was 90% of the former) the BE number itself saw a significant downward revision to ₹6.63 lakh crore. In fact, BE numbers for GST collections in both 2020-21 (made before the pandemic hit) and 2021-22 are still lower than the 2018-19 numbers. That GST collection projections after 2018-19 have been reduced even though nominal GDP has gone up shows that the initial revenue potential from the tax was overestimated.

The optimism around the fact that recent GST collections have been impressive, January, March and April 2021 collections were the highest ever, needs to be seen in the light of the long-term moderation of revenue expectations from GST.

India’s fiscal federalism entails a sharing of central taxes with the states, the formula for which is decided by the Finance Commission every five years. This arrangement implies that the Centre and the states bear an equal burden of any windfall gain or loss in tax collections. The Centre’s increasing reliance on cess and special surcharges, which are not a part of the divisible pool of taxes, has been undermining this constitutional arrangement. An argument which can be cited in the centre’s favour is that it has been making significant budgetary allocation towards sectors which are under the state list. But this is also done partly with expectations of political benefits .

GST is slightly different in its fiscal federalism arrangement. Because it entailed a bigger surrender of taxation powers for the states – states do not levy direct taxes or customs duties – a guaranteed revenue growth of 14% for a period of five years was offered to them by the centre to get them to agree. This issue became controversial when GST collections fell because of the pandemic.

The August 2020 newsletter from the GST Council secretariat recognised the severity of the problem. “It is estimated that the compensation requirement in the current financial year (2020-21) would be ₹3 lakh crore, while only ₹65,000 crore is expected from the cess collection. Total shortfall is estimated at ₹2.35 lakh crore, of which ₹97,000 crore is on account of GST shortfall, while the rest is due to the impact of Covid-19 on the economy”, it said.

What followed was disagreement over how to provide for this shortfall, with the centre proposing borrowing by state government, something that most states eventually signed off on. It is also not uncommon to find state governments complaining about the centre delaying compensation payments. This has emerged as a consistent tension in India’s fiscal federalism framework. 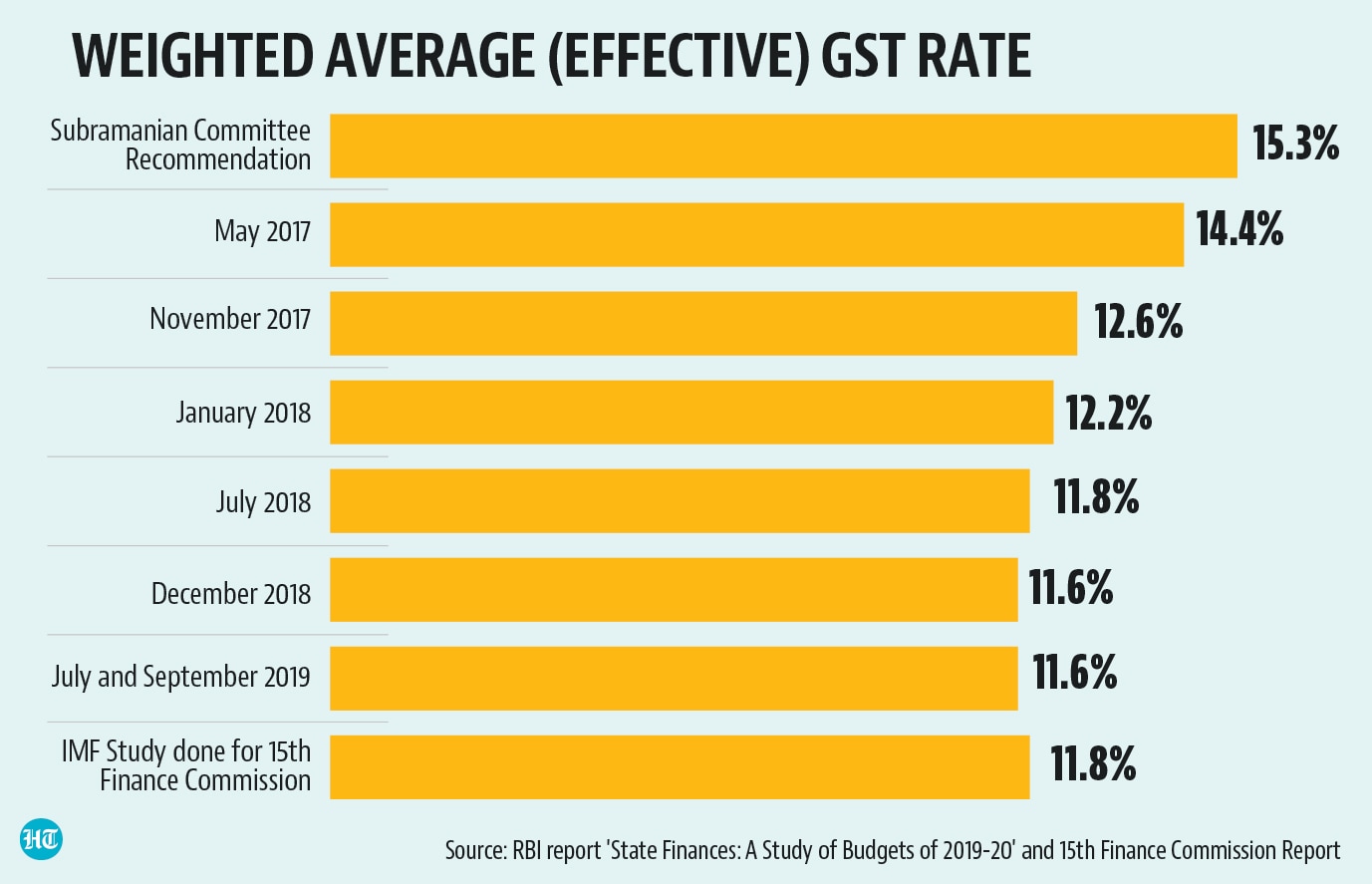 The fact that state governments have been given a guaranteed revenue growth under the GST framework has created a moral hazard for the GST Council. There are repeated demands for reducing GST rates on all kinds of commodities from time to time, which have the effect of lowering the weighted average GST rate and therefore overall revenue collections. Against the revenue neutral rate of 15.3% which was recommended by the Arvind Subramanian Committee, weighted average GST rate has been falling continuously and was just 11.6% in July and September 2019. An IMF analysis of GST, which was done on behalf of the 15th Finance Commission indicated that the current effective tax rate is around 11.8%.

That GST has not lived up to the initial expectations of revenue mobilisation created a tussle between the Centre and the states on the question of compensation and is increasingly becoming the main tax game in town as far as providing relief to the masses is concerned (the demand for waiving off GST on pandemic related commodities being a case in point) would suggest that it has created a big, and perhaps difficult to reconcile problem.

Such a pessimistic view should not be allowed to cloud GST’s positive effects, such as abolition of cascading taxes and tax legislation. Whether or not the GST regime is simplified in the days to come will depend on the overall fiscal outlook of the Indian state. India has seen a regressive shift in its tax burden, with an increase in share of indirect taxes. Indirect taxes, unlike direct taxes such as income tax, do not differentiate between the rich and the poor and therefore put a bigger burden on the latter.

The pandemic has led to an increase in inequality and deterioration in quality of employment. This will generate additional headwinds for direct tax collections after the corporation tax cuts of September 2019. This will increase the temptation to exploit the indirect tax route (it is also happening with taxes on fuel). GST’s future trajectory will not be immune from these prevailing fiscal tensions.