The officials recorded the noise levels at the crossroads of Chitale Bandhu Mithaiwale and Mandai near Shanipar area as 88 decibels (dB), and 92 decibels (dB) on Laxmi road, at 10 pm.

The Maharashtra Pollution Control Board (MPCB) had a busy night on the last day of Ganpati immersion on Thursday with their officials, placed at the 18 designated spots across the city, measuring sound levels as part of their noise pollution check during the Ganeshotsav.

The officials recorded the noise levels at the crossroads of Chitale Bandhu Mithaiwale and Mandai near Shanipar area as 88 decibels (dB), and 92 decibels (dB) on Laxmi road, at 10 pm.

“It is expected that the noise level will be higher on the last day of immersion as many devotes take part in the procession, but it was less than previous year when the DJ music blast touched as high as 92 decibels,” said Dilip Khedkar, regional officer, Maharashtra Pollution Control Board.

The officials take reading every ten minutes while continuously recording the sound, then an average is derived after compiling the readings. While Karve road recorded 96.6 decibels, Laxmi road was 89.6 and Kothrud recorded 92.8 decibels. The lowest noise level was recorded at Shivajinagar at 73.4 decibels. The noise level was taken between 6 pm and midnight (12 am) on Thursday.

“There is a reduction in noise pollution as compared to previous years. Increase in awareness and proactive steps taken by authorities and mandals have brought positive results,” added Khedkar.

Mahesh Shindikar, College of Engineering Pune (COEP) assistant professor, and his student volunteers also conducted a noise level check during the Ganpati festival, their 19th in a row.

Shindikar, “This year, although there was less DJ music and significant reduction in noise level, it did not make much difference as traditional instruments increased the noise pollution level.” According to their study, the average sound decibel recorded between noon (12 pm) on September 12 and 8 am on September 13 was 86.2 decibels. According to the COEP readings, the highest was recorded along the Laxmi road and Limbaraj Maharaj chowk at 90.5 decibels and the lowest at Khanduji Baba chowk (Deccan) at 78 decibels.

The varsity assistant professor attributed the reduction in noise pollution to public awareness about its adverse effects.

Residents immerse idols in the artificial pond set up by businessman Vijay Aswani and his family at Vaibhavnagar in Pimpri on Thursday. ( HT/PHOTO )

Artificial ponds have made him a green hero

For 25-year-old Vijay Aswani, it was the multiple videos on the Internet and social media about the adverse effects that immersion of idols cause on the environment and marine life in water bodies that attracted him towards artificial ponds for immersion of household Ganpati idols.

The resident of Vaibhavnagar area in Pimpri and his family, who are into construction business, have made three artificial tanks. Devotees from his neighbourhood and nearby places have praised his efforts and used the facility for immersion.

“We had set up artificial tanks last year also and 9,000 household idols were immersed. The figure will rise this year though we are yet to count,” said Aswani.

“I wished to do something to protect the environment and my father agreed to this idea. We plan to cover more areas in future,” he said.

Pimpri Chinchwad Municipal Cooperation provided water and electricity facilities to the family for their eco-friendly initiative.

The Aswani family sets up the artificial ponds on day 1 of Ganpati celebrations and carry out cleaning exercise after immersion. “We put ammonium bicarbonate in the ponds to allow idols made of plaster of Paris (PoP) to dissolve. The dissolution takes 15-20 days,” Aswani said. The sludge formed after using the chemical and cleaning up the ponds is used to make flower pots.

“We mix cement and sand with sludge and make flower pots. The pots are distributed to Ganesh mandals. This year, we are donating it to Jai Hind School in Pimpri,” he said.

Many idols were donated at a programme organised at Chinchwad ghat on Thursday. ( HT/PHOTO )

The immersion procession went off peacefully in Pimpri-Chinchwad on Thursday. It lasted for 10 hours as 35 Ganpati mandals participated in the procession. The last idol was immersed at 11.50 pm. According to Pimpri Chinchwad Municipal Corporation, 85 mandals took part in the 2018 immersion procession and it took 12 hours to complete it.

The dhol-tasha troupe during the immersion process of Tulshibaug Ganpati Mandal on Thursday. ( Sanket Wankhade/HT PHOTO )

Two Ganpati mandals clashed during the immersion procession in the city on Thursday. The argument prompting the residents and police authorities to carry out immediate intervention to defuse the crisis.

The Narveer Tanaji mandal workers of Shivajinagar were reportedly attacked by a rival mandal leading to tension in the area.

Senior police officials rushed to the scene and pacified the warring sections.

Later, an armed contingent was stationed on the streets to ward off any untoward situation.

The police and civic authorities had made elaborate arrangements to ensure smooth and peaceful passage of the immersion procession.

In an example of humanity, residents gave way to an ambulance during the massive Ganesh idol immersion procession on Thursday.

Thousands of devotees, soaked in religious fervour, were taking the Ganpati idol for immersion when the emergency vehicle got stuck in the crowd at Laxmi road.

The incident was caught on camera, winning applause on social media.

According to the recently announced new traffic rules, one has to pay a fine of ₹10,000 for not giving way to the ambulance and other emergency vehicles.

Earlier this year, during Puri Rath Yatra devotees, showed similar gesture by creating a way for the medical van. 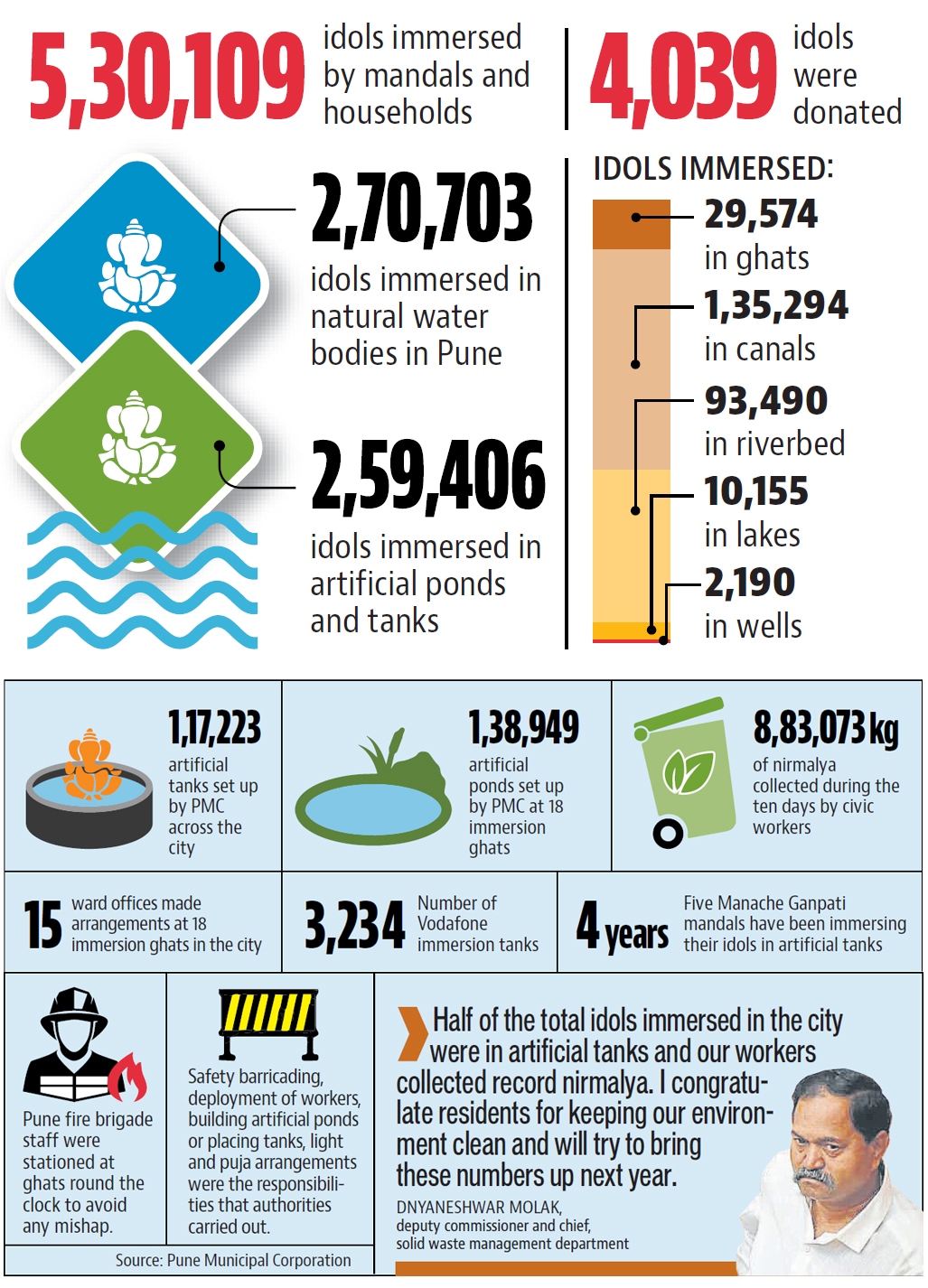