18 cops, 4 cars and 90-minute chase: How abducted schoolboy was rescued in Delhi

The Delhi Police officials had named their operation “C-River” after a mall outside which the kidnappers wanted Rs 60 lakh ransom delivered.

Nearly a week before they rescued five-year-old Vihaan Gupta from a Ghaziabad building on Tuesday, the crime branch officers had substantial clues about the identities of his kidnappers. However, instead of immediately going after them, the cops remained “cautious and patient”. The way in which Vihaan was kidnapped on January 25 from east Delhi was signal enough to the cops that the “trigger-happy” abductors wouldn’t think twice before harming the child.

The police took a “calculated risk in a fraction of a second” in the dramatic last minutes of the operation, said an officer involved in Tuesday’s encounter that left a suspected kidnapper dead.

DCP Ram Gopal Naik said the kidnappers had made the first ransom call at 12.50 am on January 28, nearly three days after they dragged Vihaan out of his school bus at gunpoint in east Delhi’s Dilshad Garden. As repeated ransom calls came in, the police named their operation “C-River”, based on the name of a mall outside which the kidnappers wanted Rs 60 lakh ransom delivered.

Read: Delhi kidnapper fell to bullets on the day he had to sit for Class 10 exam

“Multiple CCTV cameras had captured the kidnappers when they were fleeing after kidnapping Vihaan. They used to make ransom calls from different locations but there was a pattern to it. We put their phone numbers on surveillance. We understood they were based somewhere in Sahibabad but did not know the exact address where the boy was kept,” said Naik. JANUARY 25; 7.30AM A mini bus, carrying schoolchildren, is waiting to pick up a student near GTBHospital in east Delhi. Two people on a bike stop near it. They point a gun and force the maid to open the gate of the van The bus driver senses trouble and tries to drive away, but one of the men shoots him in the leg. As soon as the bus stops, the other man drags out five-year-old Vihaan Gupta The kidnappers take the boy to a 2BHK flat on the fifth floor of Shalimar City, a housing society in Sahibabad. Three men live in the flat with the child. Two of them carry guns. They wear masks to ensure the child does not identify them The kidnappers bring food for the child in polythene bags. They make videos of the boy on their mobile phone and click his photos to send them to his parents to convince them that he is safe. Some women also visit the flat To make the ransom calls to the boy’s father, the kidnappers visit various places in east Delhi and Ghaziabad
THE CHASE 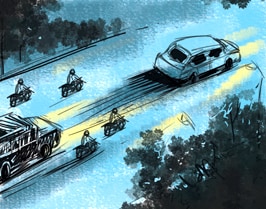 Police use technical surveillance and intelligence to know that one of the kidnappers will come to Vivek Vihar in east Delhi late Monday evening. Apolice team starts following his car after he picks up food for the child For more than one hour, the police vehicles chase him. At one point, they lose sight of him after getting stuck in a jam near Nand Nagri. But thepolicemen on bikes trace him again FEBRUARY 5; 11.35 PM: He is finally intercepted by the police at 11.35 pm in Seemapuri. Trying to escape, he rams two police cars.
Then, he jumps out of his car and tries to call his associates, but is captured. The police force the kidnapper to reveal the location of the hideout and the boy’s whereabouts
THE ENCOUNTER FEBRUARY 6; 12.50 AM: The police team reaches the Sahibabad flat, makes the arrested kidnapper ring the doorbell. Two policemen stand near him, while others wait for the door to open; Sensing trouble, the two kidnappers inside the flat shoot at two policemen 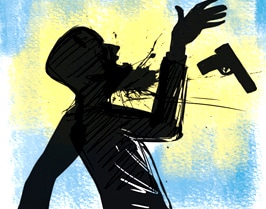 A policeman shoots back and a bullet hits a kidnapper in the neck, killing him on the spot. The other is hit in the thigh. The injured man is kept at gunpoint while policemen break the door The boy is found sitting beside a bed in the bedroom. The boy was frightened. Police pick him up and convince him that they are not criminals
Illustration: ANIMESH DEVNATH

On Monday afternoon, the police received tip-off that Nitin Kumar Sharma, the alleged mastermind, would come to Vivek Vihar in east Delhi in the evening to collect food for the child and attend a wedding. A team of 18 men set out in four cars and on four motorcycles. What followed was a 90-minute chase on east Delhi’s congested roads after he was spotted outside a food joint.

“We ensured that he didn’t know that he was being followed and alert other kidnappers. He drank at the wedding and was speeding. But we kept the chase on, moving our cars back and forth so that he doesn’t suspect being trapped,” said inspector Vinay Tyagi, who killed one of the kidnappers in the encounter.

“At one point, we got stuck in a traffic jam and lost sight of him somewhere in Nand Nagri. But our men on motorcycles managed to spot him,” said Tyagi. After a chase of nearly 20 kilometres, we finally intercepted his Swift Dzire car in Seemapuri. He rammed two of our cars in his bid to escape, but we caught him before he could alert his associates,” said Tyagi.

Sharma was soon forced into revealing the kidnappers’ hideout. He also informed that the two abductors in the flat had guns. The police team took him along to the flat located on the fifth floor of a multi-storey building in Shalimar City, a housing society in Ghaziabad’s Sahibabad.

At 12.50 am on Tuesday, the police team raided the flat. Tyagi and a police commando, led the team while others followed them. “We told Sharma to ask his friends to open the door. They opened the wooden door, but did not unlock the iron gates because they got suspicious,” said DCP Naik, who led the rescue operation.

“When we told them that police have surrounded them, both of them rushed inside and brought out guns. They began firing at us. The commando and I were hit. We took a quick, calculated risk and reacted in a fraction of a second. I shot back in self-defence,” said Tyagi.

One man was hit in his neck and immediately collapsed. “The other man tried to run into the boy’s room, possibly to kill him or took him hostage. But I fired again, hitting him in his leg. His gun fell down,” said Tyagi.

The policemen joined hands to break the locked iron gate. “The injured kidnapper was trying to reach for his gun but the commando pointed his AK47 assault rifle at him, telling him not to try anything stupid,” said Tyagi.

Moments later, the DCP rushed to the bedroom to pick the terrified boy in his arms. “He was screaming. It was the second time he had witnessed gunshots. I picked him in my arms and convinced him that we were not criminals,” said the DCP.