All leaders commended the cordial environment of the all-party meeting but the two former chief ministers said they will continue to fight for restoration of Article 370, which bestowed special status to J&K.
Share Via
Copy Link
By Smriti Kak Ramachandran, Hindustan Times, New Delhi

Mainstream politicians from Jammu & Kashmir pushed for the restoration of the region’s special status at a key meeting chaired by Prime Minister Narendra Modi on Thursday, underlining problems with the delimitation process, and demanding the reinstatement of full statehood before polls are held.

All leaders commended the cordial environment of the all-party meeting, the first such outreach by the Union government since the controversial scrapping of J&K’s special status in August 2019, but two former chief ministers said they will continue to fight for restoration of Article 370, which bestowed special status to J&K. 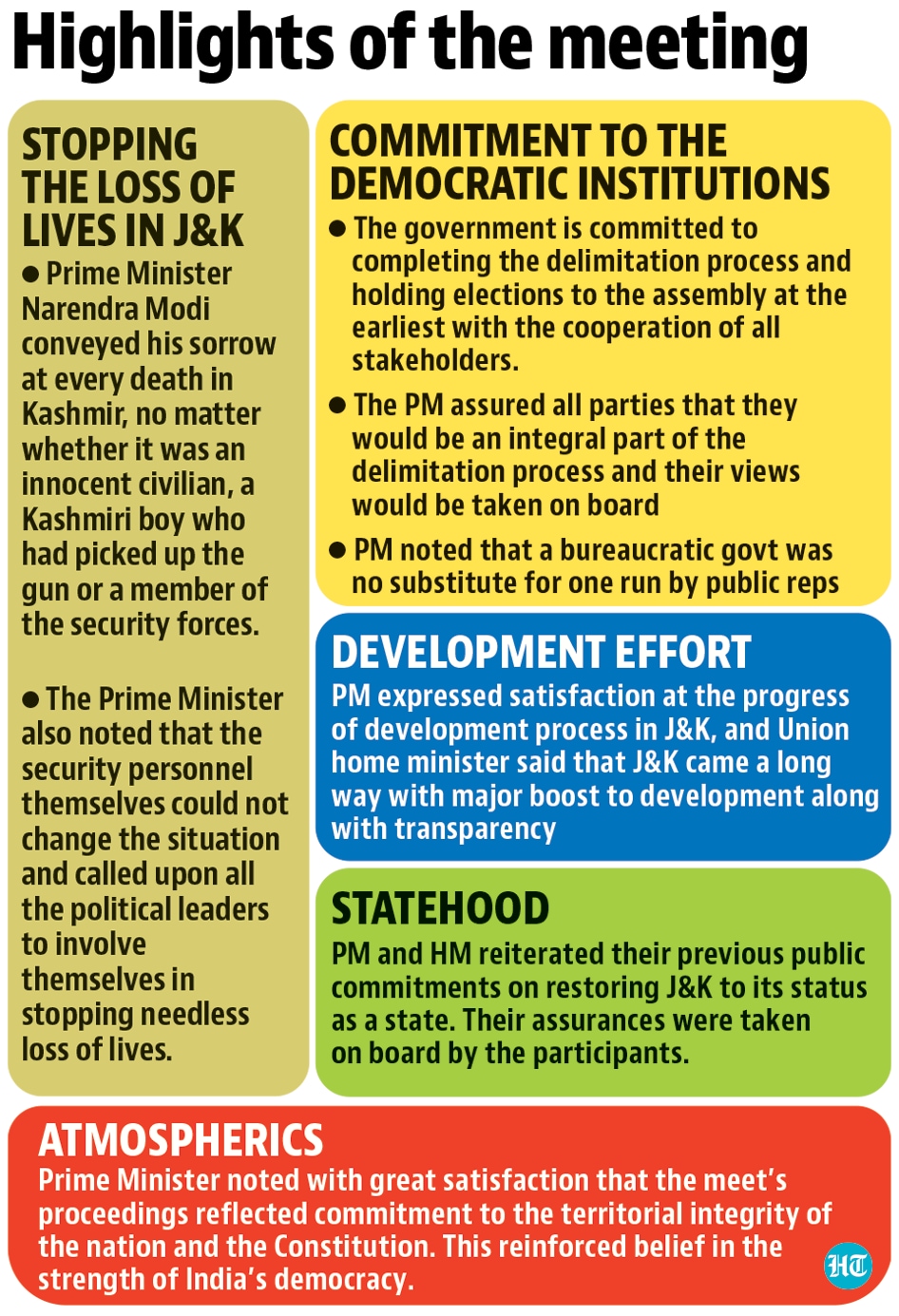 National Conference (NC) leader Omar Abdullah said there was a loss of trust between J&K and the Centre and it was up to the Union government to repair the breach. He also questioned the ongoing delimitation process – a contentious exercise of redrawing poll constituencies – and asked why it was not happening anywhere else in India.

Abdullah also said his party did not accept the Centre’s decision on Article 370. “We are not ready to accept it but we will not take the law into a hands. We’ll fight this in court,” he told reporters.

Peoples Democratic Party (PDP) chief Mehbooba Mufti said the people in J&K were finding it tough to live freely and added that the Centre should have consulted the J&K assembly before abrogating Article 370.

Mufti said she told the PM that the people of J&K didn’t accept how Article 370 was nullified “unconstitutionally, illegally, and immorally”.

“The people of J&K will struggle constitutionally, democratically, peacefully. Be it months or years, we will restore Article 370 in Jammu and Kashmir as it is a matter of our identity. We did not get it from Pakistan, it was given to us by our country, by Jawaharlal Nehru and Sardar Patel,” she said. “There will be no compromise on this.”

Both Mufti and Abdullah are part of the People’s Alliance for Gupkar Declaration, a five-party alliance of parties in Kashmir that was formed to push for the restoration of Article 370. NC and PDP have, so far, boycotted the delimitation exercise.

The meeting – which came after weeks of backchannel talks by national security adviser Ajit Doval and the Union home ministry – signalled the beginning of political engagement in the Valley, which remains bitterly opposed to its bifurcation and stripping of statehood. The Union government and many of the attendees hailed the event.

“Today’s meeting with political leaders from Jammu & Kashmir is an important step in the ongoing efforts towards a developed and progressive J&K, where all-round growth is furthered,” Modi tweeted. Shah mentioned that the delimitation exercise, peaceful elections and restoring statehood were discussed.

At the meeting, many Kashmir politicians were dissatisfied with the Union government’s assurance that statehood will be restored in time and they insisted on statehood as a precursor to the electoral process, said a person aware of the details.

Shah told the parties that the Centre will follow the process of conducting delimitation followed by elections and then restoration of statehood, said the person quoted above.

“However, the proposition seems untenable for the leadership since they will have to go to polls with a loss of face. They have been promising the people the restoration of statehood and going to elections,” said the person quoted in the first instance, on condition of anonymity.

Article 370 also came up in the meeting. “The PDP, NC and CPI(M) raised the issue while the Congress steered clear of referring to restoration of the special status,” said the person quoted above.

Former chief minister Farooq Abdullah said his party will continue to challenge the effective abrogation of Article 370 through legal and constitutional means.

“There is a loss of trust which needs to be restored immediately and for that, to begin with, the Centre should work for restoration of complete statehood to Jammu and Kashmir,” he said.

Congress leader Ghulam Nabi Azad said, “We put forth five demands; the first is that the dissolution of the state into union territories was carried out without the consent of the elected representatives so statehood should be restored. We have also asked for conducting elections to the Vidhan Sabha, rehabilitation of Kashmiri pandits and protection of domicile rules.”

“The statehood of Jammu & Kashmir was scrapped without consultation with the people. The PM and home minister heard our concerns, demands and aspirations today. We apprised them our issues. Unfortunately, we did not get any concrete assurances from them,” CPI(M)’s Mohammed Yousuf Tarigami told ANI.