In 2019-20, the city government pegged its revenue from the liquor business at ₹5,500 crore -- roughly 11% of its total revenue of ₹51,000 crore. Among major states, an HT analysis showed only in Karnataka and Telangana, liquor revenue formed a bigger percentage of the state’s revenue.

Liquor sales and excise duty form one of the most important streams of income for the Delhi government but labyrinthine rules, underperforming government shops, brand suppression, malpractice in registration, and an opaque cabal of operators controlling the business in the city are forcing the administration to haemorrhage revenue, experts say.

In 2019-20, the city government pegged its revenue from the liquor business at ₹5,500 crore -- roughly 11% of its total revenue of ₹51,000 crore. Among major states, an HT analysis showed only in Karnataka and Telangana, liquor revenue formed a bigger percentage of the state’s revenue.

This is crucial because unlike major states, Delhi sits on a smaller revenue base. The problem, experts said, is made worse by the city’s high legal drinking age and several dry days.

An expert committee formed last year calculated that the liquor revenue can rise to ₹7,651 crore just by plugging some of the obvious loopholes and cracking down on the liquor mafia. Some government officials say that it can even be doubled or trebled if the system is cleaned up and progressive rules are put in place.

“If you look at it in a collective way, it is huge…in most cases, number of transactions are high and it gets difficult to prove such cases even though we can smell something fishy. So, we are now trying to address the root of the problem,” said a senior excise department official. 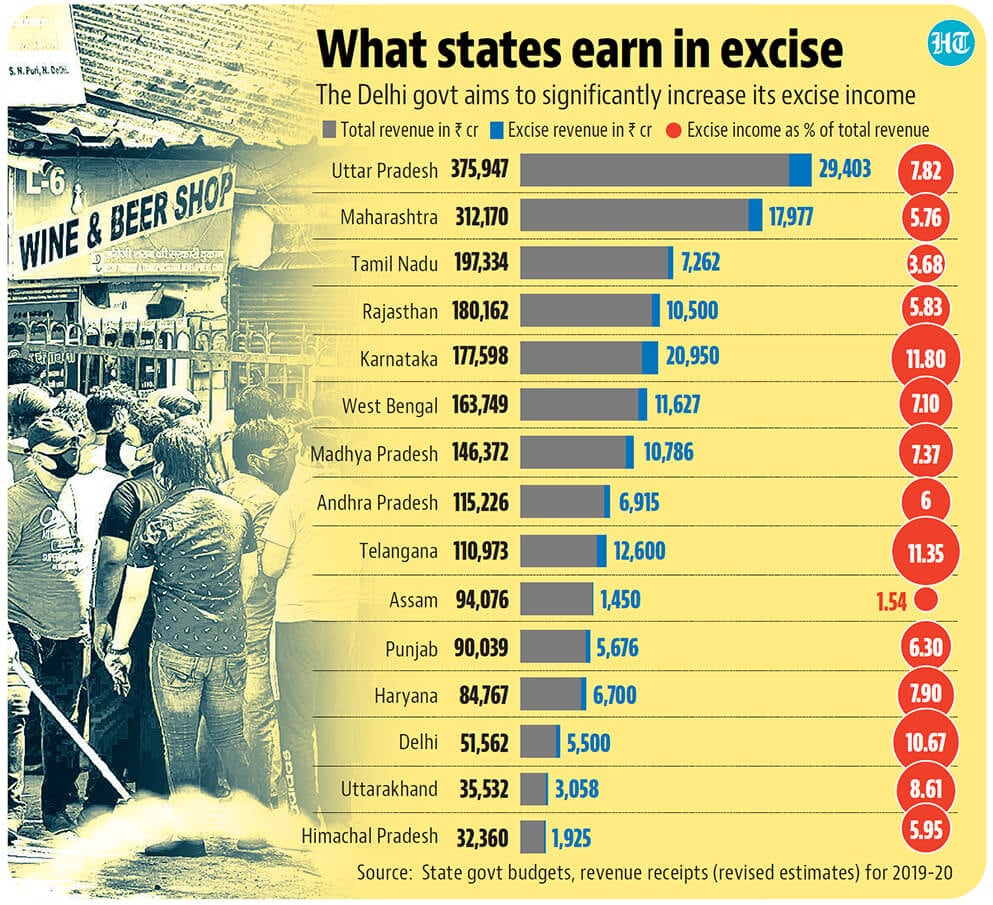 According to experts, the liquor business in Delhi is shrouded in opacity and controlled by a handful of individuals or groups. They steer the wholesale procurement of brands, dictate terms and commissions to major brands for getting stocked in shops, some of them duplicate bar codes and game the registration process to push off-the-book manufacturers, and even facilitate the illegal transport of liquor from neighbouring states into the city and ensure that a majority of retailers only sell brands approved by them. HT has raised several of these points in the first four parts of this series.

Officials say the large-scale corruption and irregularity starts at the procurement level, and thrives in a murky system where customers get 10 seconds in front of a window grille before being shoved aside, pilferage is unchecked and oversight lax, and no one has a clear handle on stocks, procurement or revenue figures.

The fallout of is multifold: Dissatisfied customers who have to jostle to grab whatever bottle the retailer is pushing, annoyed buyers not being able to buy their brand of choice because the shopkeeper is being paid a commission to suppress it. It results not only in poor customer experience but also in loss of revenue to the state.

“The reforms are needed as a mitigation measure to such cartelisation, and hence, the committee has proposed a lottery system for retail vends and also suggested fixing targets on VAT per vend which would have to be achieved annually,” a government official said on condition of anonymity.

The government believes its new proposed excise policy can help cover the lacunae, and has identified five pain points that are symptoms of a larger malaise.

One, the problem of duplicating mandatory bar codes – crucial to tracking revenue and checking leakage -- attached to each bottle of liquor sold in Delhi. The city government doesn’t have a role in liquor wholesale, which is managed by 77 private vendors. Officials say there is a big racket in the “liquor mafia” of slapping duplicated bar codes on non-duty paid liquor (NDPL), from which the government receives no revenue.

This also means that the government has very little control over other malpractices such as brand pushing and brand suppression, because duplicate bar codes make tracing off-the-books brands almost impossible. This is a violation of Section 33 of the Delhi Excise Act and punishable with a jail term of up to three years and a penalty of up to ₹1 lakh.

“Although it is tough to attribute a percentage to the menace in terms of revenue loss, the practice of sticking duplicate barcodes on liquor bottles is quite frequent. Last year, we registered an FIR against a private liquor shop in Pitampura after our enforcement team found duplicate barcodes pasted 12 cases of whisky bottles. In 2019, we banned the world’s largest brewer from selling its products in Delhi for three years as we found that barcodes were being duplicated by its acquired company and supplied to the retail outlets to evade payment of excise duty,” said a second excise official.

Two, license fees on retail liquor vends are low and the slabs unevenly spread. Setting up a retail liquor shop currently costs anywhere between ₹4 lakh to ₹8 lakh depending on the category of license applied for.

A 40-seat resto bar located in an upmarket commercial space such as Connaught Place pays the same license fee as one located in Dilshad Garden or Seelampur. The license fee is calculated based on seating, and the rates differ on whether an establishment has 48 covers or 96 covers, and so on.

The expert committee suggested this policy be discontinued, and license rates be hiked to ₹75 lakh per licensee for private vends.

But Prakul Kumar, secretary general of the national restaurants association of India (NRAI), disagreed, underlining that establishments in areas such as Khan Market and Connaught Place paid much higher rent. “The government should ensure that the revised license fee does not add to their burden, especially at a time when the industry is recovering after the Covid-19 pandemic.”

Three, the existing regime for brand registration is not revenue accretive because a brand with sales volume of a few thousand bottles or less pays the same fees as paid by a brand with a sales volume of one million cases a year. In addition, the current rules facilitate the registration of cheap brands of whisky and rum with cost up to ₹140 with a minimum-sale criteria. The government’s revenues from these brands are the lowest and these makes are often pushed at the cost of more premium variants, say officials.

To resolve this, the expert committee recommended the reduction of brand registration fee across all categories, and the abolishing rum and whisky brands below ₹140 so that quality products are made available. It has also recommended to set a sales volume criteria to give an opportunity to niche players to enter the market with quality products.

Another problem is the capping in profit margin of Indian Made Foreign Liquor and Foreign Liquor to ₹50 and ₹100 respectively, which has remained unchanged for six years. This discourages retailers to place purchase orders for premium brands due to the ceiling on the margins. The lopsided license registration system – which places 80% of IMFL in one slab – has also been overhauled .

Four, the low numbers and uneven distribution of liquor stores. Delhi has one of the lowest densities of liquor stores with respect to population, and this encourages bootlegging and illicit trade from other states. Out of the 272 municipal wards in the city, 70 have no liquor shops. No new license allotment for opening liquor shops has happened since 2016.

Delhi has 720 liquor shops – of which 460 are run by government agencies and 260 by private individuals and agencies . The expert committee plans to change this by increasing the number of shops to 916, with more equitable distribution across municipal wards.

However, Bhoob Singh, a member of the Delhi Alcobev Retailers Association, a group of 107 retailers in the city, said: “The government should allot new licenses for underserved and unserved areas but they should not bring existing license holders under its equitable distribution plan.”

Another problem is “mixing”, where some bars switch out premium, registered brands with local, unregistered makes without the knowledge of the consumer. It not only vexes buyers but also hurts revenue because governments earn far more per bottle from premium brands as excise duty, the officials added.

“It has happened with me so many times. But there are no means to check,” said advertisement executive Ankit Sharma.

A senior excise department official said the administration receives many such complaints every year, singling out a 2017 incident when the department raided a popular restobar and found irregularities between orders recorded for some expensive brands and their actual stock. “We suspended the bar’s license for that year,” said the official.

Kumar said any instances of mixing should not happen at all.

“It would make sense for the government to reduce its presence the retail sector, or even exit altogether. The government shops are anyway not contributing to improving customer experience or revenues,” said Vivek Makhija, a Delhi-based businessman.

“Government moving out of retail would mean more private shops and that would contribute to improving buyers’ experience, if the government exits in a phased manner. Their exit at one go can give disproportionate power to private license holders and they may start taking calls on what brands to boycott or endorse,” said Vinod Giri, director-general of the Confederation of Indian Alcoholic Beverage Companies.

Experts agree that it is the right direction to move in.