Households were rebuilding cash stash even a year after demonetisation

Demonetisation, announced almost three years ago, on November 8, 2016, was primarily meant to purge unaccounted wealth in cash, but more than 99% of demonetised currency came back into the financial system.

Now, three years later, data released recently by National Account Statistics (NAS) shows that Indian households were quick to accumulate significantly more cash after demonetisation than they previously held. This was done most likely to compensate for the depletion of their cash holdings caused by demonetisation.

In 2017-18, savings in currency accounted for 25% of the total gross financial savings of households.

This was the highest since 2011-12, the earliest period for which data is available under the new series. Correspondingly, the share of deposits in gross financial savings was 28% in 2017-18, the lowest since 2011-12. This suggests that people withdrew money from banks to keep at home. Data after 2017-18 isn’t available. (See Chart 1) These numbers are so-called flow variables, which means they reflect they change between opening and closing balances in the fiscal year. This means that demonetisation forced households to deposit in banks whatever cash they were holding.

The fact that the 2016-17 value for cash savings is negative means that liquidity was not restored completely until March 2017 and people still had their money caught up in banks. Once liquidity was restored in 2017-18, households withdrew more money from banks than they normally did and replenished their depleted cash reserves. 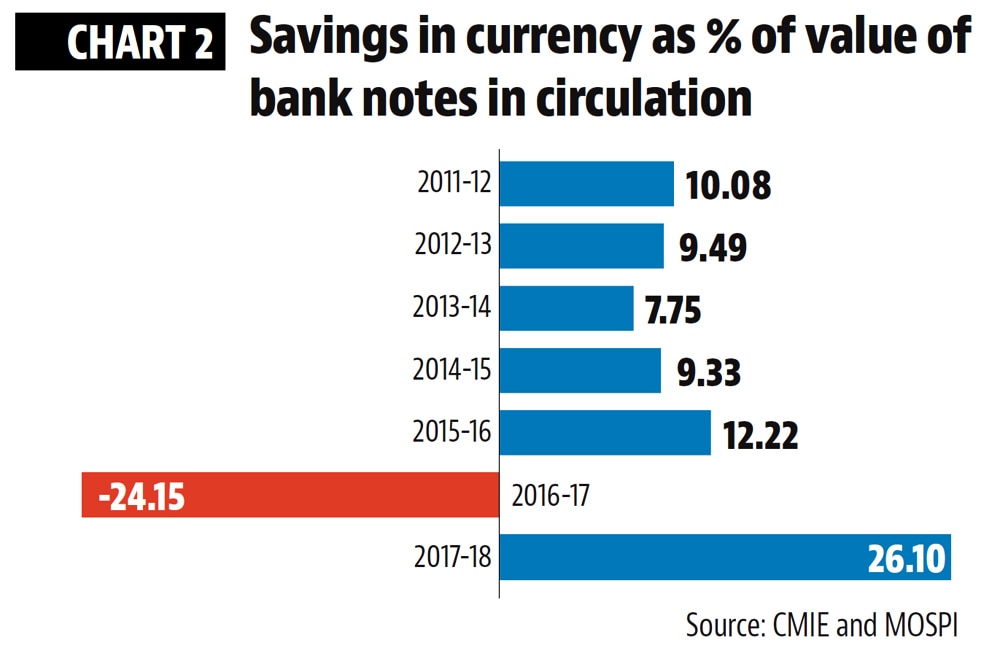 While the desire of households to rebuild and perhaps even increase their cash reserves is a purely behavioural phenomenon, it could have contributed in part to the present slowdown in the Indian economy.

In an article written in November 2016, Avinash Tripathi, currently a research fellow at Azim Premji University and then at the Takshashila Institution predicted this. The observations are worth reproducing here, “It is true that the current shortage of currency in India is temporary, and it is hoped that the economy will bounce back once liquidity conditions improve. But by that time, the velocity of money will slow down because people will hoard cash rather than spend it, an output gap (difference between actual output of an economy and the maximum potential output) will develop, deflationary expectations will have set in and the economy would be in a slowdown mode. For a variety of reasons, the Reserve Bank of India will find it hard to aggressively cut interest rates without triggering an outflow of capital from the economy and precipitating an external crisis”.

At least one high-frequency indicator corroborates this theory. The RBI Consumer Confidence Survey, which is conducted in 29 cities, seeks responses on general economic situation.

The net perception, defined as the difference between share of respondents who see things improving and deteriorating, was rising until demonetisation happened November 2016. Since then, the perception has mostly been in negative territory.