Outstanding problems with the People’s Liberation Army (PLA) at Depsang, Hot Springs and Gogra - friction points on the contested border - were discussed on Saturday.
Share Via
Copy Link
ByRahul Singh

At a marathon 16-hour meeting between senior commanders on Saturday, the Indian and Chinese armies agreed to resolve outstanding issues at friction points on the contested Line of Actual Control (LAC) in a “steady and orderly” manner; the parties were unanimous that the Pangong Tso disengagement provided “a good basis” for resolving pending problems and decided to take forward the military dialogue to stabilise the ground situation in eastern Ladakh, said a joint statement issued in New Delhi and Beijing on Sunday.

The two sides said they had a “candid and in-depth exchange of views” on the outstanding issues in the Ladakh sector during the tenth round of military talks held at Moldo on the Chinese side of the LAC at which both sides agreed to push for a “mutually acceptable resolution” of the remaining issues “in a steady and orderly manner,” the statement said. But the statement made no mention of the issues that are still to be resolved to ease tensions along the LAC.

The corps commander-ranked officers of the two armies on Saturday discussed the roadmap for further disengagement of their troops at friction points on the LAC, with the talks taking place after the completion of the first round of disengagement in the Pangong Tso sector. 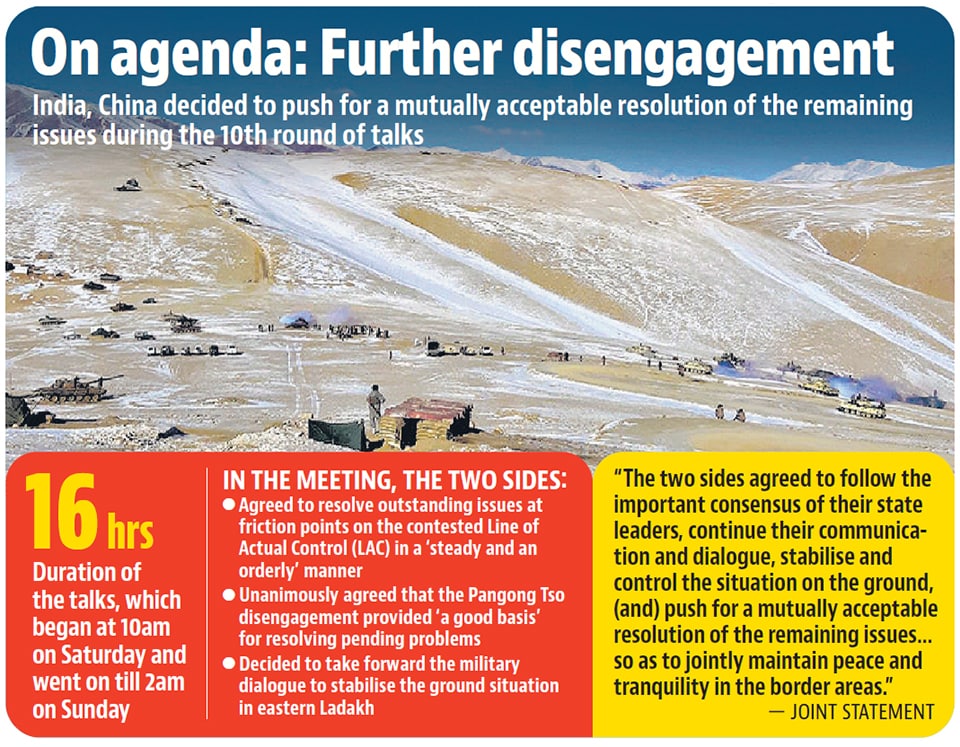 The talks began at 10 am on Saturday and went on till 2 am on Sunday. Outstanding problems with the People’s Liberation Army (PLA) at Depsang, Hot Springs and Gogra - friction points on the LAC - were discussed during the talks.

“The two sides agreed to follow the important consensus of their state leaders, continue their communication and dialogue, stabilise and control the situation on the ground, (and) push for a mutually acceptable resolution of the remaining issues…, so as to jointly maintain peace and tranquillity in the border areas,” the statement said.

India and China were of the view that the successful completion of disengagement in the Pangong Tso sector would help them make progress in other areas too. “The two sides positively appraised the smooth completion of disengagement of frontline troops in the Pangong Lake area, noting that it was a significant step forward that provided a good basis for resolution of other remaining issues,” the statement added.

The proposals discussed during the talks to normalise the border situation will be put up by both sides before their higher authorities in order to finalise the future course of disengagement, said people familiar with the process, speaking on the condition of anonymity. Disengagement at Gogra and Hot Springs will be easier to pursue than resolving the problems at Depsang, said an official cited above. He added that some issues in Demchok also needed to be sorted out but that would not be complicated.

The tone of the joint statement is positive, but it also indicates that a quick resolution of outstanding issues may not be possible, said former Northern Army commander Lieutenant General DS Hooda (retd).

“Depsang, in particular, is tricky because of its strategic value and the vast difference in the LAC perception of the two sides. Hopefully, the success of Pangong Tso can provide an impetus to resolving issues in other areas though we should be patient. Meanwhile, declarations of victory or defeat should be avoided as it can complicate discussions on the ground,” Hooda said.

PLA’s deployments in Depsang have hindered access of Indian soldiers to Patrolling Points (PP) 10, 11, 11-A, 12 and 13, as previously reported by Hindustan Times.

The Indian Army’s patrolling activity has also been affected in Gogra and Hot Springs, where rival troops are forward deployed and where skeletal disengagement took place last year, but the gains could not be consolidated.

The India-China border standoff began last May and saw both sides deploy 50,000 troops each in the Ladakh theatre along with advanced weaponry.

The Pangong disengagement took place on strategic heights on both banks of the lake, and saw the two armies pull back their frontline troops, tanks, infantry combat vehicles (ICVs) and artillery guns under an agreement reached earlier this month.

The disengagement will be phased, coordinated and verified at all friction points. The first round of disengagement at Pangong Tso involved pulling back troops deployed eyeball-to-eyeball on the Finger 4 ridgeline at heights of almost 18,000 feet as well as withdrawing soldiers holding positions on the Kailash range on the south bank.

On the north bank, PLA retreated to its base east of Finger 8, while the Indian Army moved back to its position near Finger 3. Under the disengagement agreement, neither side will patrol the contested areas between Fingers 4 and 8 until an agreement is reached through future talks.

India’s bold moves on the south bank of Pangong Tso last August boosted the army’s bargaining power during military talks and eventually led to an agreement on disengagement. The Indian Army occupied a series of heights to prevent the PLA from grabbing Indian territory on the south bank in a stealthy midnight move on August 29, 2020.

The Indian Army followed this up by rushing its front-line tanks and ICVs to strategic heights held by its soldiers.