Number Theory: Why monthly death data is the missing element in the Covid-19 mortality debate

india news
As per Office of the Registrar General of India's 9OCGI) data, there were 160,618 medically certified Covid-19 deaths in 2020.
Share Via
Copy Link
ByAbhishek Jha, New Delhi

On May 25, the Office of the Registrar General of India (ORGI) under the Ministry of Home Affairs released data on medically certified cause of death (MCCD).

What would help India’s cause are monthly death statistics. Here are four charts which explain this argument in detail.

The most reliable official estimate of deaths in India is given in the Sample Registration System (SRS). SRS is based on a sample survey and used to estimate the so-called Crude Death Rate (CDR) as well as the estimated number of total deaths by extrapolating CDR to a projected population. CDR is the rate of deaths (with respect to a population) that occur in region in a given year.

On the second level, come death statistics from the Civil Registration System (CRS), which as the name suggests, is just the total number of deaths that are registered with government authorities in a given year.

MCCD statistics on deaths are on the third level: they only compile the number of deaths where the exact cause of mortality has been medically certified.

As is to be expected, not all of India’s deaths are registered, and even those that do get registered, the medical cause of death may not necessarily be recorded. In the language of set theory, this is best described as MCCD deaths being a subset of CRS deaths, which is just one part of the universal set of total deaths in India, which in itself is an estimate arrived at through the SRS. 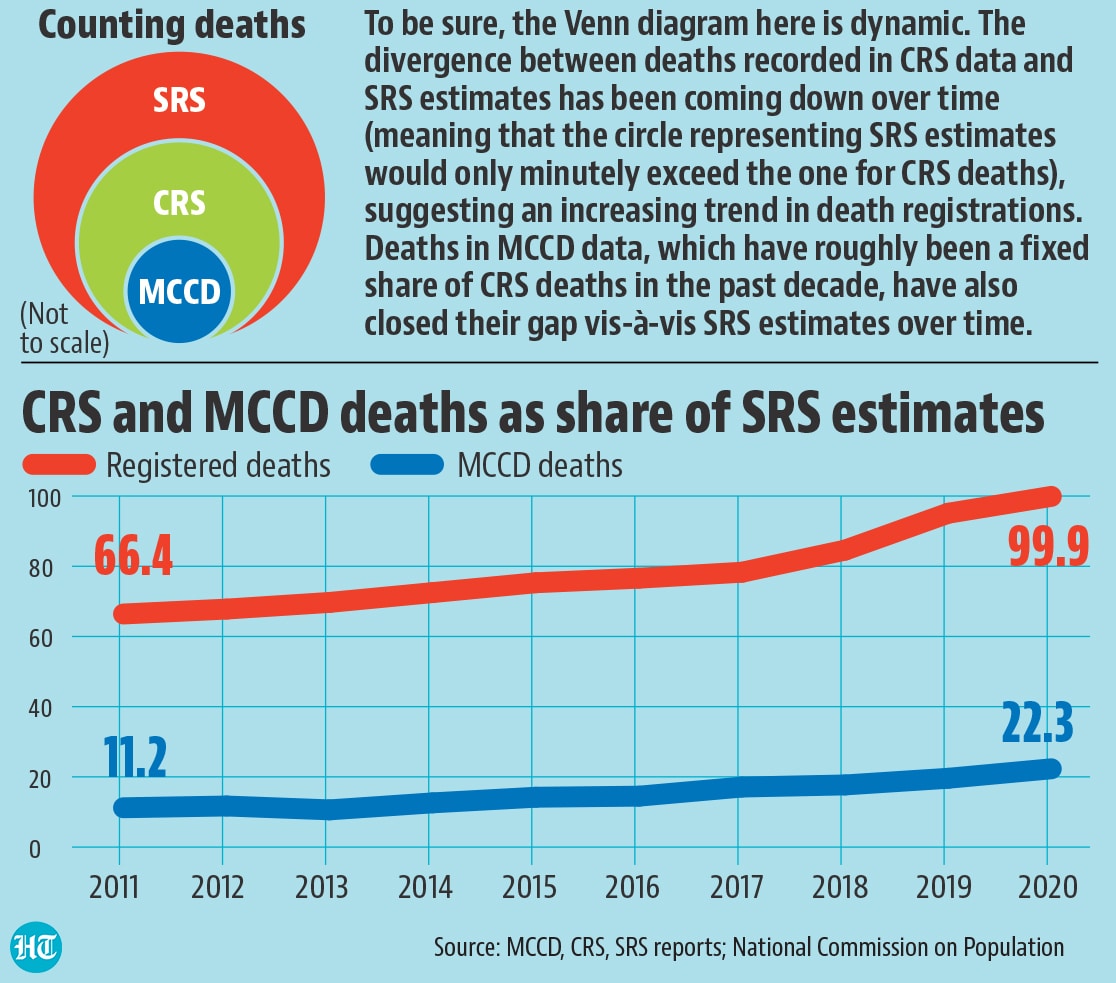 As a second order subset, it is surprising that MCCD even captured a Covid death undercount

In fact, the all-India MCCD death toll due to Covid-19 exceeding the one compiled from health bulletins is a result of just a few states reporting more Covid-19 deaths in the MCCD database than in their own Covid bulletins. An HT analysis of these two numbers shows that in 19 states and union territories, health bulletins actually reported a higher Covid-19 death toll than what MCCD shows.

MCCD data has tabulated Covid-19 deaths into two categories: first, where a laboratory test conclusively proved the person had Covid-19 (this accounts for 86% of total Covid-19 deaths recorded in MCCD), and second, where tests were inconclusive or unavailable and the certification was based on clinical or epidemiological diagnosis. When seen with how official Covid death statistics are counted in India, it can be said that state bulletins would have missed this second category. Given the fact that a lot of deaths in India do not even receive medical attention and the share of such deaths increased in the 2020 CRS data, the error of omission in official Covid-19 death toll is likely to be much higher.

To be sure, for the nine states and UTs listed above that showed undercounting, even lab-confirmed Covid-19 deaths are higher than the number recorded in their bulletins.

SRS, CRS can give better idea of Covid mortality undercount in 2020, but only with monthly data

That India’s official Covid-19 death toll could be an underestimate has been argued much before CRS, SRS and MCCD data for 2020 or even WHO’s modelled estimates became available. What lent empirical credibility to such arguments were estimates of monthly “excess deaths” published by various media organisations.

These excess deaths took place when the pandemic curve actually peaked in the country. This monthly trend, is however muted in the 2020 annual numbers, because number of deaths due to causes such as accidents fell sharply during the period of the lockdown. This would, in fact, be better addressed in 2021 CRS and SRS numbers as the lockdown was in force in negligible levels through the year. This is exactly why the difference between estimated deaths in the 2020 and 2019 SRS is 86,298, which is just 57% of the official Covid-19 tally for 2020.