A special Central Bureau of Investigation (CBI) court on Wednesday acquitted all 32 persons accused of conspiring to demolish the 16th century Babri Masjid on December 6, 1992 -- an event that sparked a deadly cycle of riots and communal violence across India, leaving thousands dead.

The verdict by judge Surendra Kumar Yadav ended a 28-year-long legal fight, and brought relief to senior Bharatiya Janata Party (BJP) leaders LK Advani, Murli Manohar Joshi, Kalyan Singh and Uma Bharti, but raised serious questions about the investigation into a high-profile case by pointing out that several pieces of evidence were either inconclusive or unauthenticated.

The 2,300-page judgment ruled out any criminal conspiracy behind the razing of the disputed structure and said it was a “spontaneous act”. 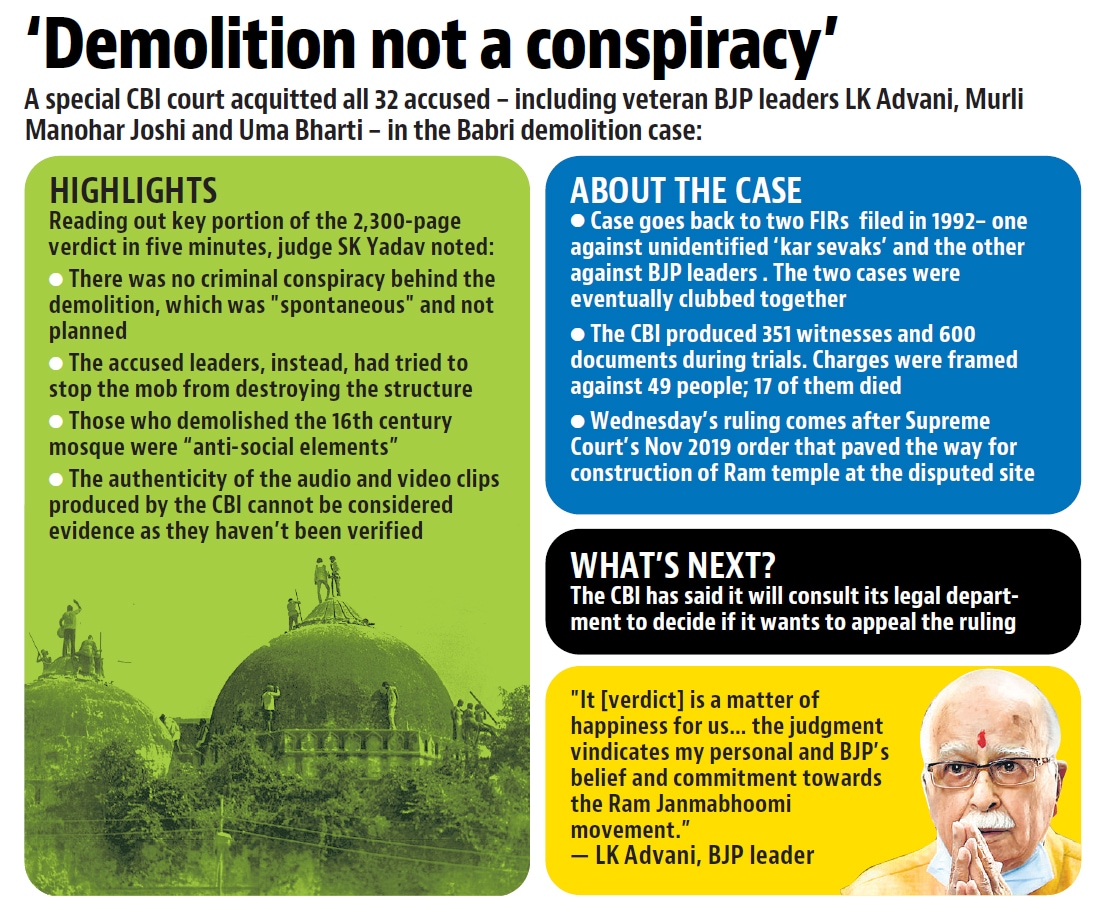 “The incident was not pre-planned,” Yadav said, reading out his verdict in open court in Lucknow. “The leaders present there actually tried to control and pacify the mob... anti-social elements brought the structure down.”

Twenty-six of the accused were present in the court, while six -- Advani, Joshi, Bharti, Kalyan Singh, Ram temple trust chief Mahant Nritya Gopal Das, and former Shiv Sena leader Satish Pradhan-- followed the proceedings on video conference. Though 49 people were accused in the case, 17 died during the litigation process.

Opposition parties criticised the verdict, describing it as a “black day” for justice. Experts said the decision showed the judge was not convinced of the evidence given by the CBI. And All-India Muslim Personal Law Board (AIMPLB) member Zafaryab Jilani said the verdict will be challenged in high court.

Yadav said in his judgment that CBI could not produce any conclusive evidence against any accused and refused to accept newspaper reports, documents and video cassettes as evidence. It was Yadav’s last working day in judicial service after being on extension for a year.

Reading out the operative part of the verdict at 12.15pm, the judge said he did not accept newspaper reports as evidence as their original copies were not produced and proved. He also did not rely on the photos of the incident as their negatives were not produced. “The video cassettes were not sealed and even the videos were not clear and as such the same cannot be relied (on),” he observed, adding that they were not certified by any forensic laboratory to ascertain authenticity. The CBI produced 351 witnesses and 600 pieces of document in court.

“Even VHP (Vishwa Hindu Parishad) leader late Ashok Singhal was trying to stop the kar sevaks from demolishing the disputed structure because the idol of Lord Ram was also inside the structure,” the judge wrote, concluding that the event suggested that the demolition was not planned in advance.

As soon as the judge cleared the accused of all charges, chants of “Jai Shri Ram” filled the courtroom. Outside, celebrations began as Hindu groups distributed sweets and flowers.

Supreme Court senior advocate Sanjay Hegde said there were various instances in which conspiracy charges had been applied when, at the spontaneous call of one person, others have joined in to injure a person or beat another to death.

“We do not know on weighing of the evidence, how the judge has approached the task. But in other normal conspiracy and unlawful assembly cases, we have many times seen that when one person gives a call and three or fours other persons use sticks and somebody dies, then they all get roped in under criminal conspiracy read with Section 149 of Indian Penal Code (which makes every member of an unlawful assembly guilty of an offence committed in pursuance of a common object by one person of that). But that standard does not seem to have been applied here,” said Hegde.

The verdict comes roughly 11 months after the Supreme Court last November paved the way for the construction of a Ram temple at the 2.77 acre site in Ayodhya and ordered that land for a mosque be given to the Muslim parties at an alternative spot. The ground-breaking ceremony for the temple was performed by Prime Minister Narendra Modi on August 5.

Senior lawyer and AIMPLB member Zafaryab Jilani said the verdict will be challenged in high court. “The special CBI court says that there is no evidence which prove that Babri Masjid demolition was a conspiracy but we say there is plenty of evidence,” he said.

The verdict was welcomed by the accused persons, who said their faith in religion and Ram was vindicated.

“The judgment vindicates my personal and the Bharatiya Janata Party’s belief and commitment towards the Ram Janmabhoomi movement,” said Advani, who joined the proceedings via video conference. Joshi said truth has triumphed.

Another accused, BJP leader Vinay Katiyar who was present in court, said: “We never had any role in the demolition. We were actually on stage that was away from the site where the demolition took place.”

Uttar Pradesh chief minister Yogi Adityanath and defence minister Rajnath Singh hailed the verdict. “I welcome the acquittal of all the 32 accused in the case. This shows, that though delayed, justice eventually triumphed,” said Singh.

The Congress expressed its disappointment with the verdict. “The decision of the Special Court to acquit all the accused in Babri Masjid demolition case runs counter to Supreme Court judgment as also the Constitutional spirit,” the party said in a statement.

All India Majlis-e-Ittehadul Muslimeen chief Asaduddin Owaisi called the judgment “obnoxious” and said it contradicted the Supreme Court’s observations in its verdict on November 9 last year that the demolition of the Babri mosque was a violation of law. “This verdict will mark a black day in history,” he added.

A key Muslim litigant in the title suit case, Iqbal Ansari, welcomed the verdict. “The entire world saw what happened in Ayodhya…I respect the court’s verdict.”

On December 6, 1992, tens of thousands of kar sevaks, or Hindu religious volunteers gathered in Ayodhya – the result of a months-long political and religious mobilisation programme. As the day progressed, the crowd swelled, and shortly after noon, the kar sevaks broke through the police barricades and charged towards the three domes of the mosque.

Armed with pickaxes, shovels and ropes, many young men scaled the domes. By evening, the structure was rubble and the state government had been dismissed. The criminal case originates from two police complaints lodged at 6.15pm and 6.25pm against unnamed kar sevaks and senior political leaders, respectively, at the Ram Janmabhoomi police station.

Dispute over the structure, built on what Hindus believe as the birth place of Ram, dates back to the late 19th century. For roughly two decades, two separate criminal trials ran – one against unnamed kar sevaks in Lucknow, and another against political leaders in Rae Bareli – until the apex court clubbed the two in 2017.

Allahabad high court lawyer Anurag Dixit said he thought that the prosecution failed to substantiate the evidence charges against the accused. “Moreover as we saw it, most of the evidence was in the form of newspaper reports which clearly was not a strong point,” Dixit said.