China informed the UNGA earlier this month that its manned space station had to adjust its orbit in order to avoid collision with satellites launched by Elon Musk's SpaceX.
Share Via
Copy Link
ByTannu Jain, New Delhi

Earlier this month, China informed the United Nations General Assembly that its manned space station had to adjust its orbit in order to avoid collision with satellites launched by SpaceX, calling on the world body to remind the United States “to bear responsibility” as per global treaties.

First reported by The Guardian, which cited experts as saying the Chinese action was unusual, the incident spotlights the growing risk in space, where orbital room is being crowded out by an astronomical race in which nation-states as well as private companies are increasingly active.

Behind it are projects such as the Elon Musk-owned SpaceX’s Starlink constellation and rival Amazon’s Project Kuiper. Both companies want to create a web of low-earth orbit (LEO) spacecraft that will beam down internet connectivity to anywhere on the planet. 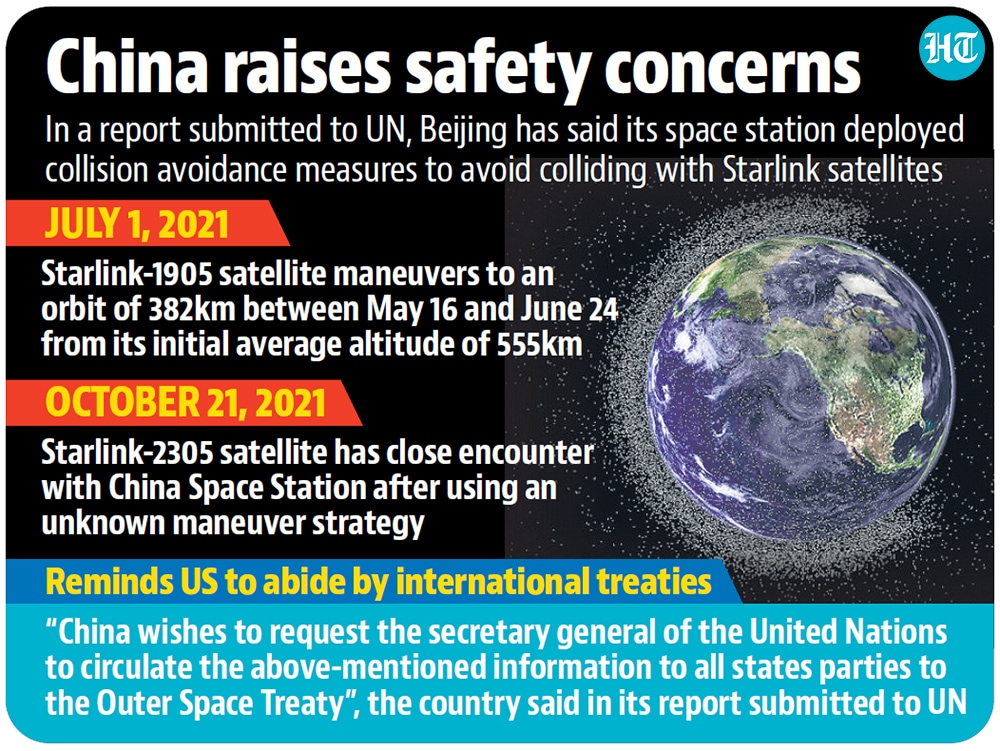 And then there are several countries – Russia and India being the most recent – that have carried out tests of satellite-killing missiles, generating millions of pieces of debris.

Scientists said such developments not only increase the risk of collisions, but – particularly the satellite constellations -- raise the chances of interference with astronomical research.

This scenario is known as the Kessler syndrome, named after Nasa scientist Donald J Kessler, who, in 1978, spoke of a hypothetical in which the orbit becomes so crowded that collisions between objects become highly likely, cause a cascade of debris that further increases more space crashes.

In October last year, a dead Soviet satellite and a discarded Chinese rocket body narrowly avoided a crash. A collision would have led to an explosion equivalent to detonating 14 metric tons of TNT, Jonathan McDowell, an astrophysicist at the Harvard-Smithsonian Center for Astrophysics, tweeted at the time.

More recently, seven astronauts and cosmonauts living on board the International Space Station (ISS) were forced to take shelter in their transport spacecraft on November 15 after a Russian anti-satellite test created a debris field in low-Earth orbit.

Days later, Nasa called off a spacewalk on November 30, after receiving a notification that debris could threaten the astronauts outside ISS.

In response, Musk tweeted, “We had to shift some Starlink satellite orbits to reduce probability of collision. Not great, but not terrible either.”

While the company says its satellites are equipped to deorbit, or naturally burn up in the Earth’s atmosphere if their propulsion systems fail, the process could take up to five years, according to the company’s website.

Since these satellites cannot be manoeuvred, the risk of collisions increases.

Such a crowded orbit “will make it harder to launch (active missions), to find a window where there are no satellites that you might hit on the way up”, McDowell told HT.

Astronomers are also concerned that the high reflectivity of these satellites could fill the sky with artificial light and interfere with observations.

“Astronomy research depends on long-time exposure photography to explore really faint objects, like distant galaxies or small asteroids. If a bunch of bright satellites fly through during the long time exposure, it will be ruined,” Lawler explained.

To its credit, SpaceX has engaged with astronomers and made changes to its satellites to address their concerns, at first coating their satellites in dark paint.

“We measured the effect and it was about two times fainter than the normal satellites, which is not sufficiently dim for us. So, SpaceX introduced a new system (”VizorSat”), a sunshade that keeps the satellite in its shadow, so that it is dark. That works much better, and all satellites launched since the summer are of the VizorSat type. This is why they are not visible with the naked eye anymore,” Olivier Hainaut, a Belgian astronomer working at European Southern Observatory and a member of the International Astronomical Union, told HT.

“There is a direct line of contact between SpaceX and the astronomers. They have made several changes to their satellites…We also have contacts with OneWeb (which already has launched roughly 80 satellites), and we are starting with Amazon/Kuiper (they are not launching yet)…we hope that having the problems understood and addressed by the first big companies will make it easier when discussing with the next ones,” Hainaut added.

SpaceX did not respond to HT’s email for a comment.