Theaterisation of Armed Forces: Decoding the new approach to defence

Theaterisation has the full backing of the government, and it expects chief of defence staff (CDS) General Bipin Rawat to bring about jointness among the three services by January 2023.

Theaterisation of the Indian armed forces could involve a significant departure from the current arrangement, a change that experts say is crucial to fighting future wars.

It is a concept that seeks to integrate the capabilities of the three services -- army, air force and navy -- and optimally utilise their resources for wars and operations. Specific theatre commands – or units – will be placed under the Theatre Commander. Such commands are expected to come under the operational control of an officer from any of the three services, depending on the function assigned.

What will it entail?

The current theaterisation model under consideration seeks to set up at least six new integrated commands.

Air Defence Command: This will control air defence resources of all three services and will be tasked with protecting military assets from airborne enemies. It will be headed by a top three-star Indian Air Force officer based in Prayagraj.

Maritime Theatre Command: This will be responsible for securing India from seaborne threats and will have army and air force elements. It will be headed by a top three-star Indian Navy officer and will be based in Karwar, Karnataka.

Ultimately, India is expected to have three other integrated commands to secure its western, northern and eastern fronts. Additionally, a logistics command is in the works to avoid duplication of efforts and resources. 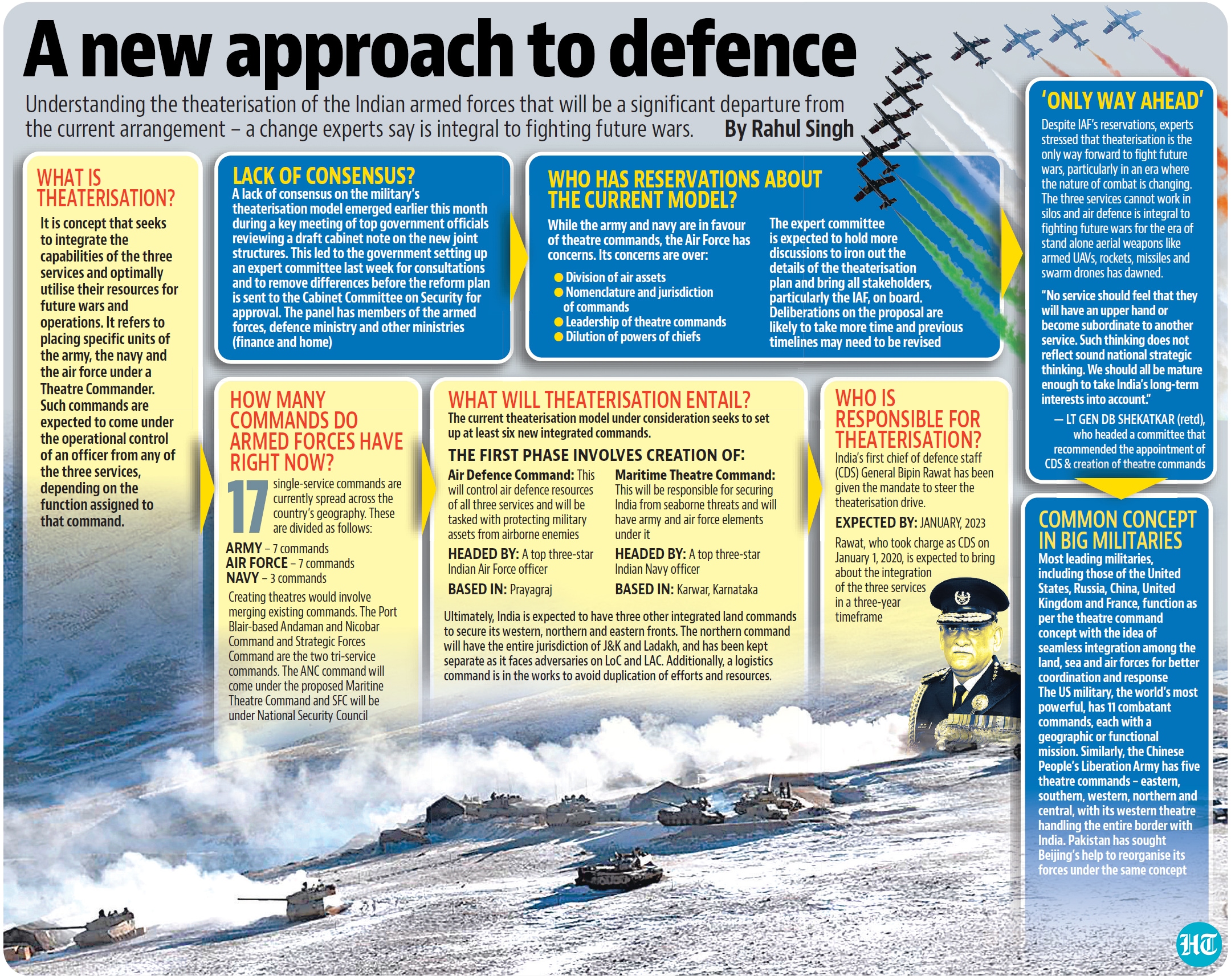 How many commands does the military currently have?

The armed forces currently have 17 single-service commands spread across the country’s geography. The Army has 7 commands, IAF has 7 commands and the Navy, 3 commands.

Creating theatres would involve merging existing commands. The Port Blair-based Andaman and Nicobar Command is the only tri-service command.

Who is responsible for theaterisation?

India’s first chief of defence staff (CDS) General Bipin Rawat has been given the mandate to steer the theaterisation drive. The government expects Rawat, who took charge as CDS on January 1, 2020, to bring about an integration of the three services in a three-year time frame (by January 2023). One of the steps to do it involves theaterisation in not just operations and logistics but also transport, training, support services and repairs and maintenance.

What is the current status?

A lack of consensus on the military’s theaterisation model emerged earlier this month during a key meeting of top government officials reviewing a draft cabinet note on the new joint structures. This led to the government setting up an expert committee last week for consultations and to remove differences before the reform plan is sent to the Cabinet Committee on Security for approval. The panel has members of the armed forces, defence ministry and other ministries (finance and home).

Who has reservations about the current model?

While the army and navy are in favour of theatre commands, the IAF has concerns about the model over the division of its air assets, the nomenclature of commands, the leadership of theatre commands and dilution of powers of chiefs. The IAF’s traditional resistance to theaterisation is well-known and has been articulated by its top leadership. The expert committee is expected to hold more discussions to iron out the details of the theaterisation plan and bring all stakeholders, especially the IAF, on board. Deliberations on the proposal are likely to take more time and previous timelines may have to be revised.

How will the role of service chiefs change?

The operational control of the theatre commands will eventually come under the CDS, with the service chiefs being responsible for raising, training and sustaining their forces. CDS Bipin Rawat wears three hats — he is the permanent chairman of chiefs of staff committee (COSC), heads the department of military affairs (DMA), and is the single-point military adviser to the defence minister. CDS is expected to have operational control over all integrated commands when they are fully functional -- this will be in his role as CDS, and not as permanent chairman, COSC.

Which other militaries have theatre commands?

Most leading militaries, including those of the United States, Russia, China, United Kingdom and France, function as per the theatre command concept with the idea of seamless integration among the land, sea and air forces for better coordination and response. The US military, the world’s most powerful, has 11 combatant commands, each with a geographic or functional mission. Similarly, the Chinese People’s Liberation Army has five theatre commands -- eastern, southern, western, northern and central, with its western theatre handling the entire border with India. Pakistan has sought Beijing’s help to reorganise its forces under the same military concept.

What is CDS’s assessment of progress made on theaterisation?

CDS Bipin Rawat on June 22 said new reforms do face hurdles, but the three services are in agreement on taking theaterisation forward. He said hurdles are necessary as they underscore the need for holding more discussions to fine-tune plans. According to him, the creation of theatre commands is progressing in line with the prescribed timelines for bringing about jointness among the three services. In March, he said “service parochialism” will have to make way for “a combined services outlook” to take theaterisation forward.